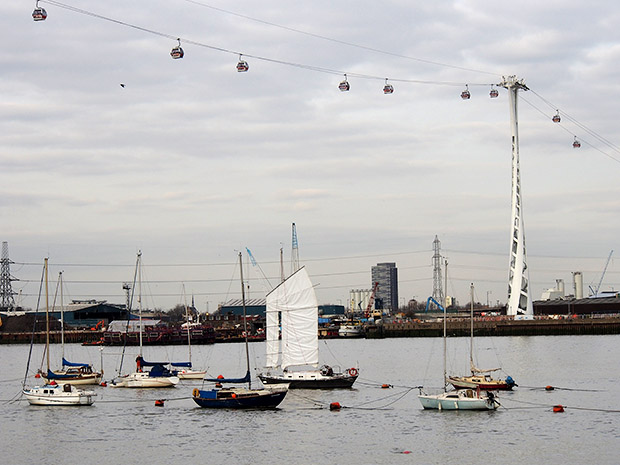 Running between North Greenwich and the Royal Docks, the Emirates Air Line cable car across the River Thames was opened on the 28th June 2012 and is operated by Transport for London.

A journey across the river costs £3.20 for Oyster or Travelcard users, or £4.30 cash (£1.60/£2.20 child fares, respectively) and represents fantastic value for money – it’s a wonderful journey! 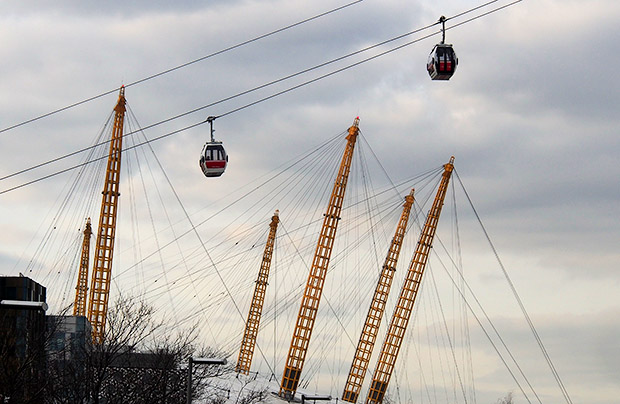 Costing a cool £60m to build, the service runs 34 gondolas, each with a maximum capacity of 10 passengers.

The system uses Monocable Detachable Gondola (MDG) technology, which has just a single cable for both propulsion and support. It’s perhaps best not to look up when you’re 50-odd metres above the water as that cable can start to look awfully thin! 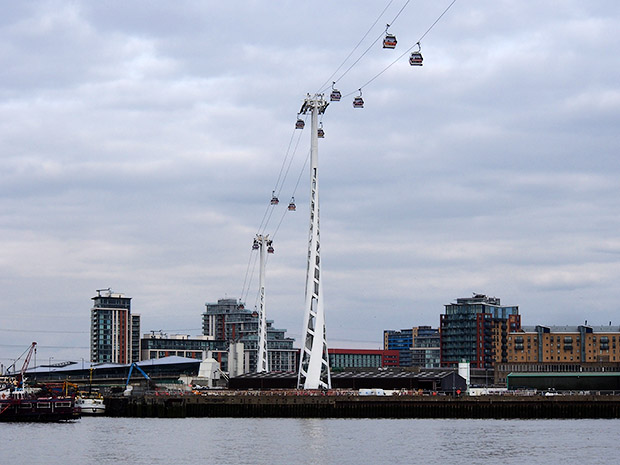 The cable car provides a crossing every 15 seconds and carry up to 2,500 passengers per hour in each direction, although recent reports say that it’s currently running at less than 10% of capacity. 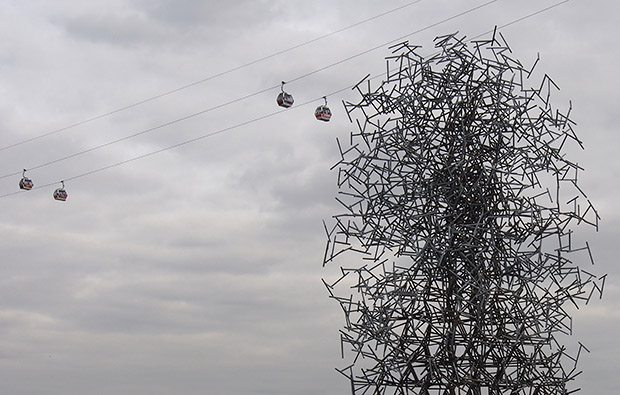 Situated next to the Millennium Dome , the sculpture is (surprisingly) taller than Gormley’s famous Angel of the North at 30m high and is constructed from a collection of tetrahedral units made from 1.5 m long sections of steel. 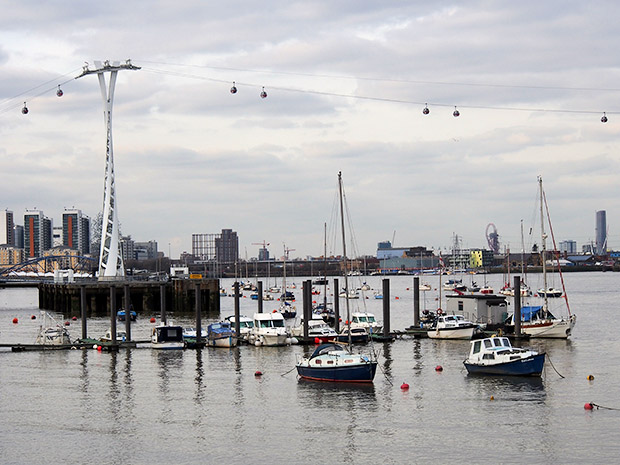 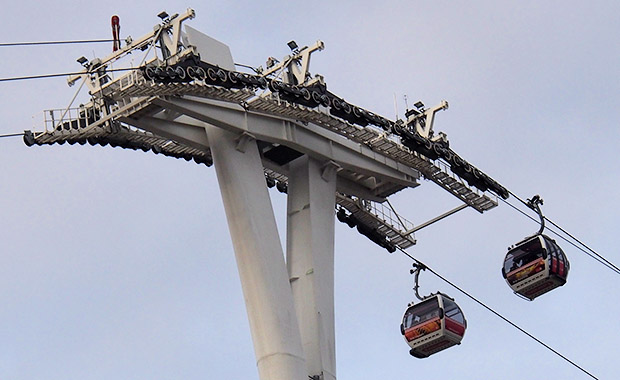 Cars crossing by one of the three main supports. 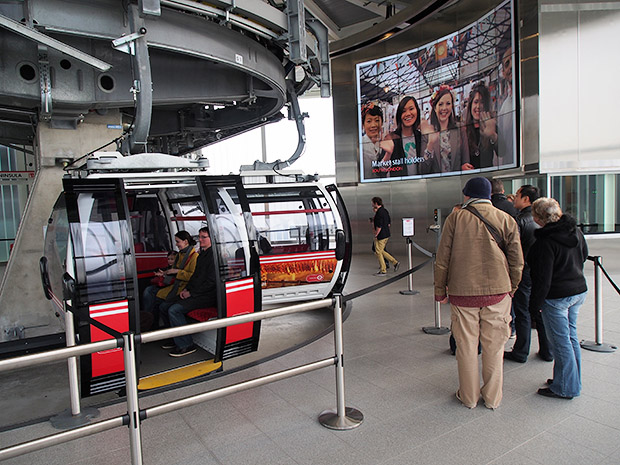 Getting on the cable car service at the North Greenwich station. The cars slow right down making it easy to hop in. 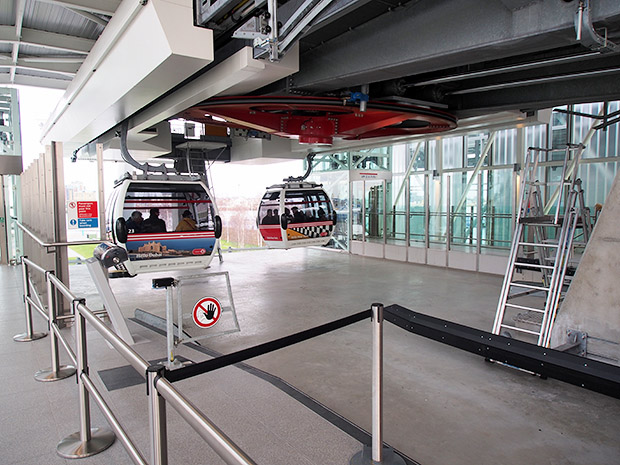 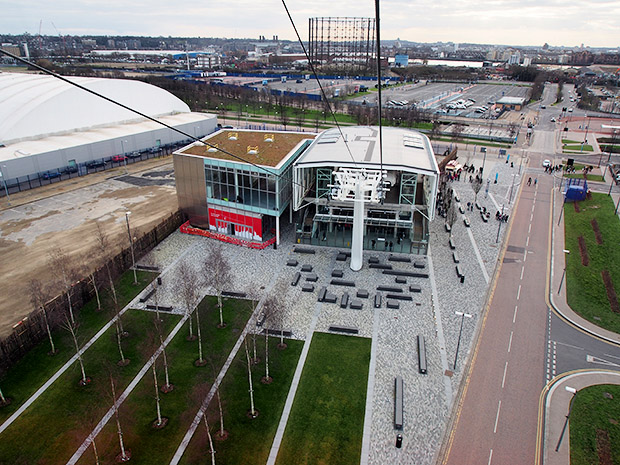 Leaving the cable car stop on the south side of the Thames. 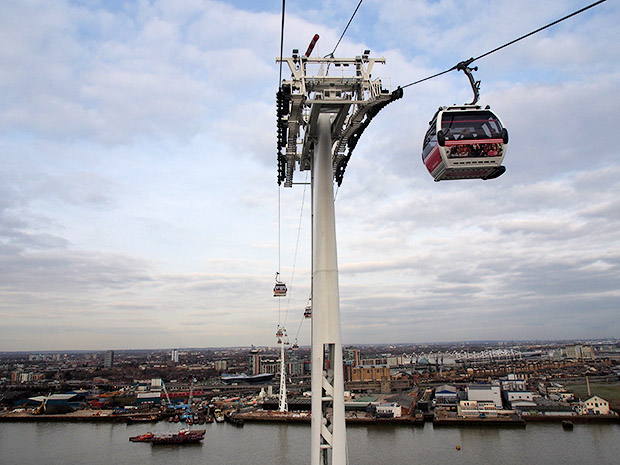 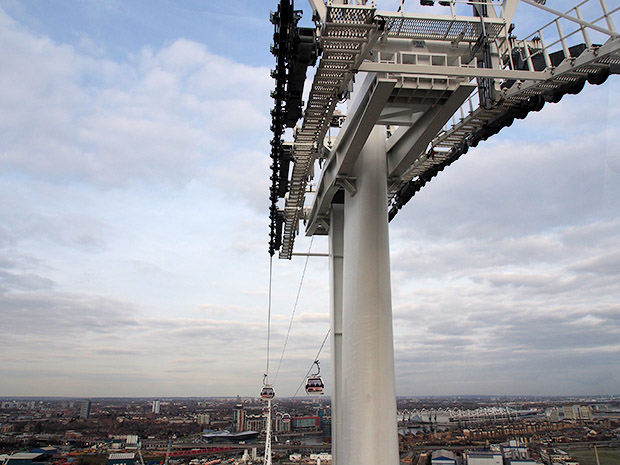 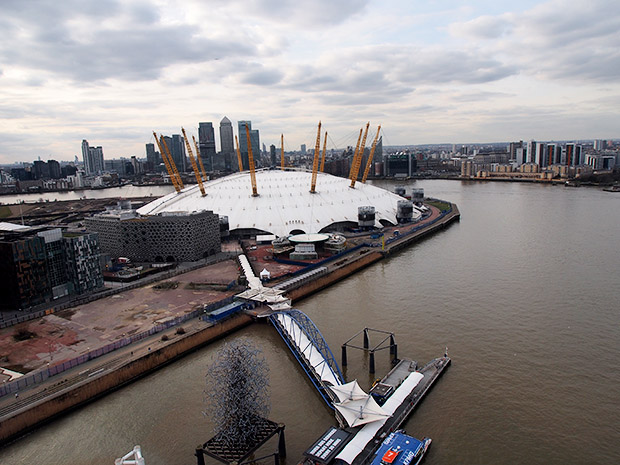 Looking towards Canary Wharf with the o2 Arena/Millennium Dome in the foreground. 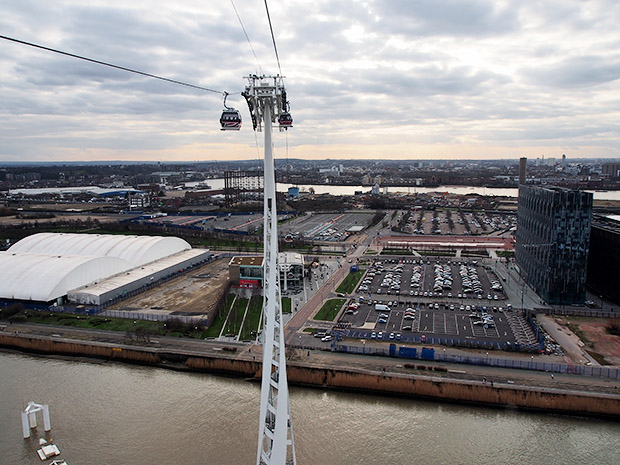 Looking back to the south side of the river. You can see how the Thames bends right around. 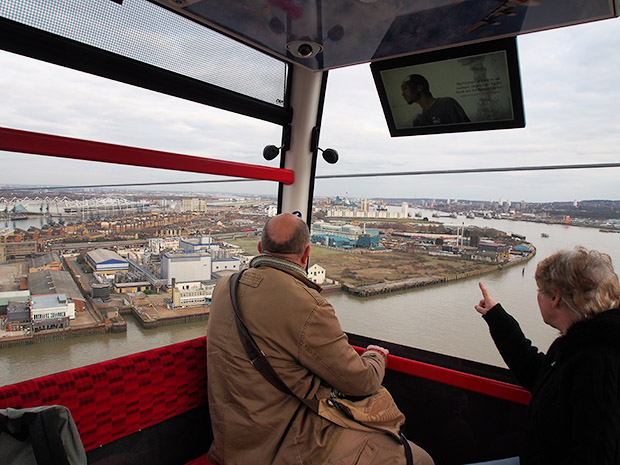 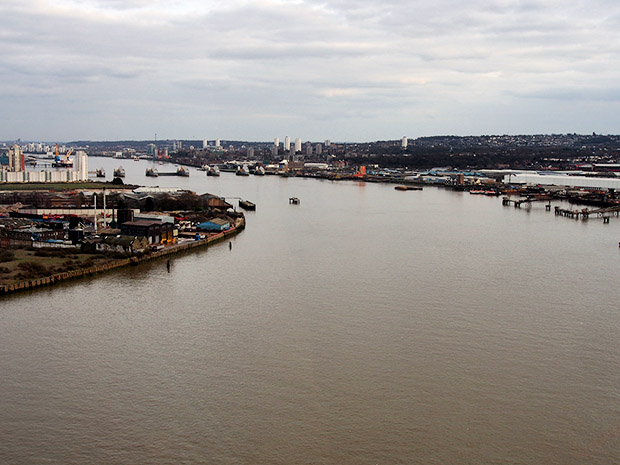 View from half way across the river. 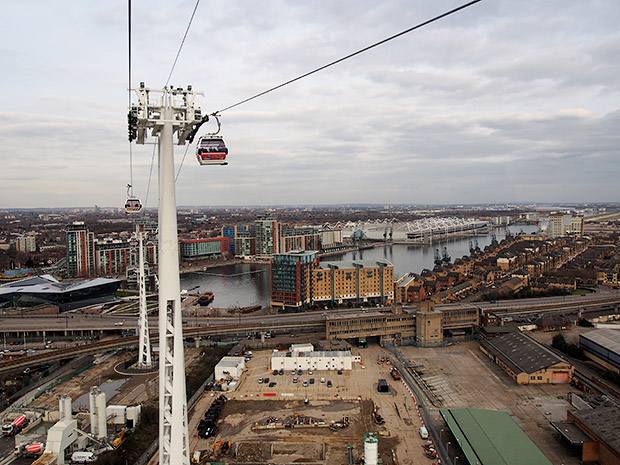 Heading towards the Royal Docks. 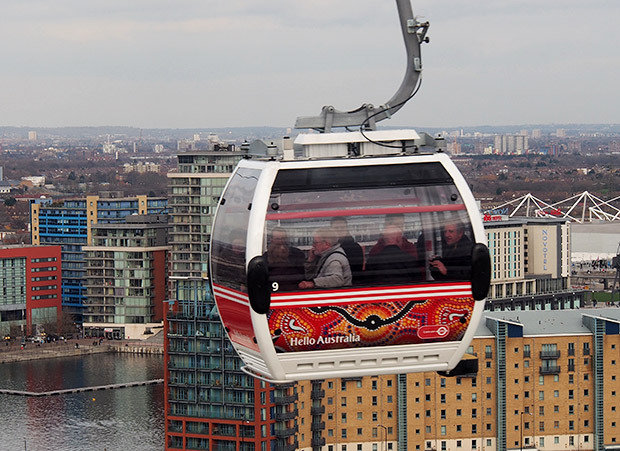 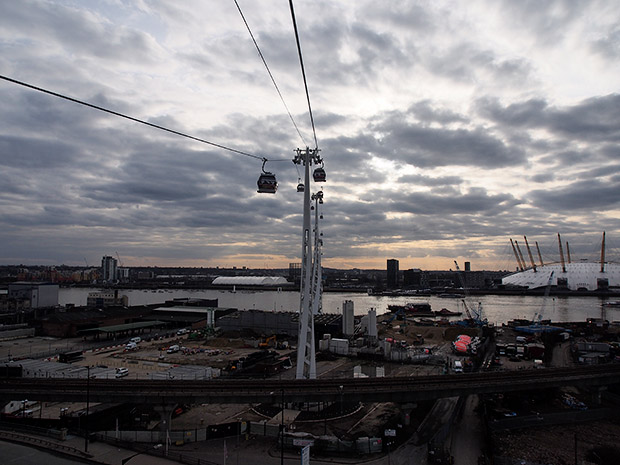 Another look back across the river. 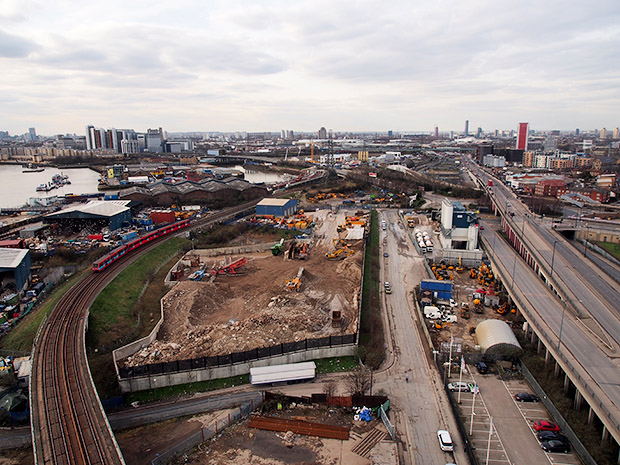 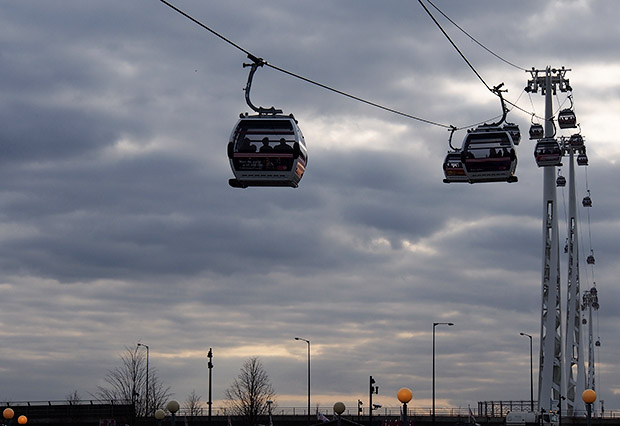 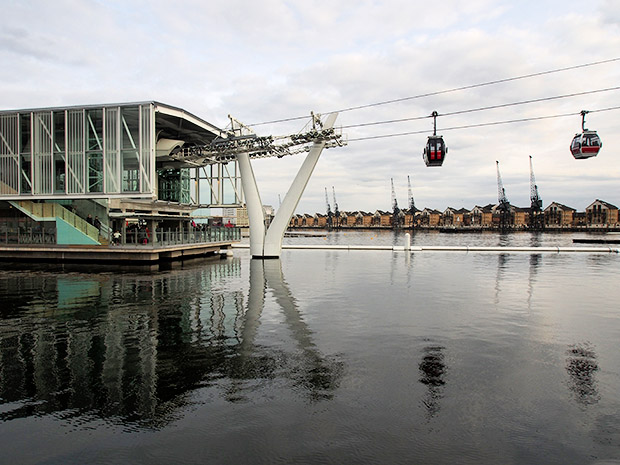 The Royal Docks station. I photographed the docks back in the 1980s and it’s astonishing to see how things have changed. 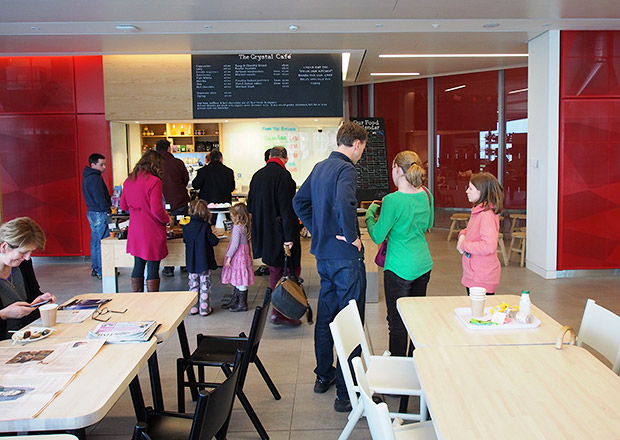 There’s not an awful lot to do around Royal Docks, but there is a nice cafe – the Crystal Cafe – which is part of an interesting Crystal exhibition space.

We went for a walk up to Canning Town – one of my old stomping grounds – and it had to be said that the place hasn’t aged too well.

The Thames cable car has been described as the most expensive gondola/cable car ever built, with the Gondola Project being particularly damning about the high cost of construction:

As we discuss here, the London Thames Cable Car appears to be nothing more than the latest example of largely English-speaking transit agencies’ unwillingness and/or inability to reign in costs related to transit projects.

Whether this is an example of scope creep, pork barrelling, corruption or just pure out-and-out incompetence is virtually irrelevant at this point because all or some clearly have a role to play in this debacle.

As someone who happens to know a little bit about cable transit systems, let be me completely blunt: There is absolutely, positively, completely no reason whatsoever this project should cost London taxpayers ~$100m USD. Not a single good reason. 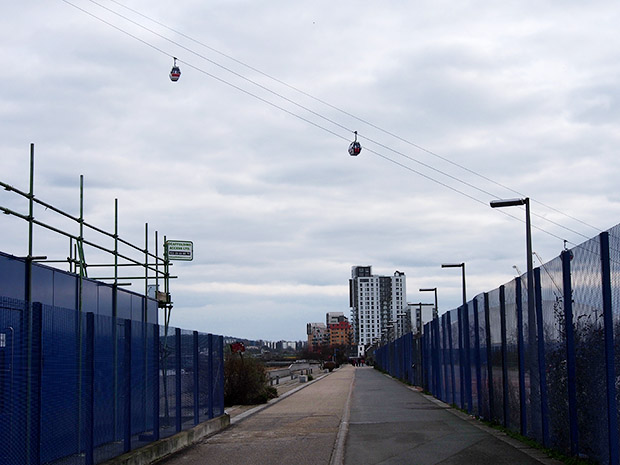 Opening times:
Weekdays 7am to 8pm
Saturdays: 8am to 8pm
Sundays: 9am to 8pm

In photos: a trip on Llandudno’s wonderful cable car to the Great Orme, August 2018

In photos: A cable car trip across Barcelona’s old harbour from Mount Montjuïc to Barcelona Beach

In photos: A trip to Nambucca, north London to see the Bridport Dagger and The Pacers, Nov 2017

One Comment on “A trip on the Emirates Air Line cable car from North Greenwich to the Royal Docks, London”