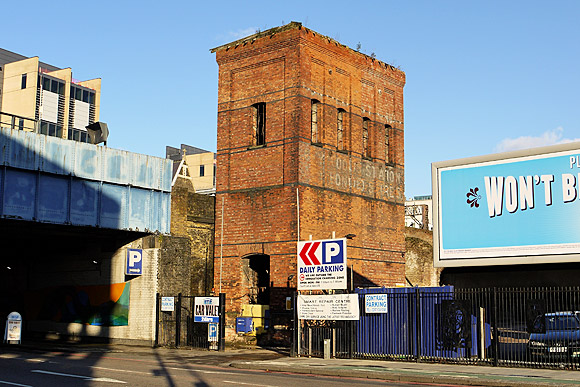 Abandoned for at least 30 years is this old ‘accumulator tower’ at Royal Mint St, by Tower Hill, London E1, which had been used for storing hydraulic power.

“An accumulator what?” you may ask, and I have to admit I didn’t have the foggiest either, but thanks to the wonders of the Internetz, I can reveal all:

A hydraulic accumulator is an energy storage device; a pressure storage reservoir in which a non-compressible hydraulic fluid is held under pressure from an external source.

That external source can be a spring or …a raised weight.
[Subbrit.org.uk] [Disused stations] 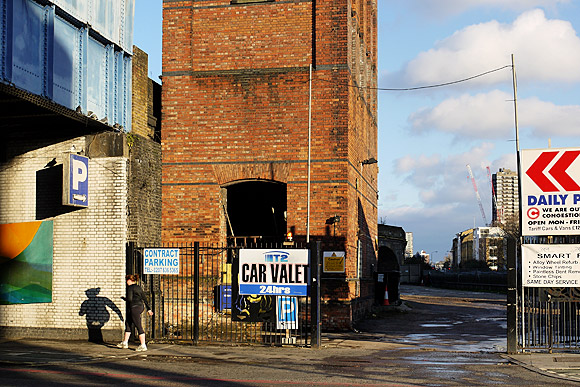 The Museum of London Archaeology Service has more about the internal workings of the tower:

The hydraulic accumulator tower was constructed at the W end of the site in at least two phases at some time between 1894 and 1913, when it was surveyed for the 3rd edition of the Ordnance Survey map. It held a large tank of water which was put under pressure by a weighted piston.

The pressurised water was forced through pipes to provide power to operate machinery such as turntables and a lift to move wagons on and off the viaduct. The depot closed in 1949 and the buildings on the site, with the exception of the accumulator tower and the viaduct, were demolished. 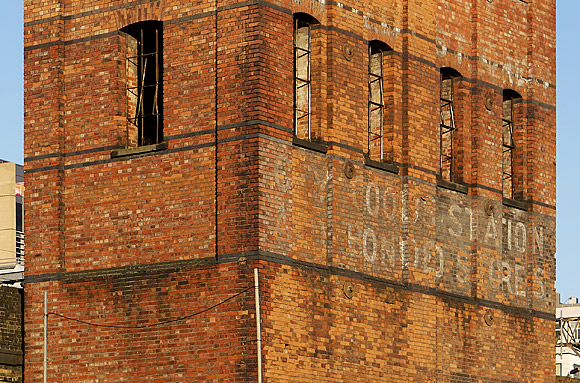 Originally proclaiming itself to be the “‘London Midland & Scottish Railway City Goods Station and Bonded Stores,’ the lettering on the side of the tower has slowly been fading over the decades.

Here’s all that remains today. It seems rather a shame that such a fine building should be left to rot.