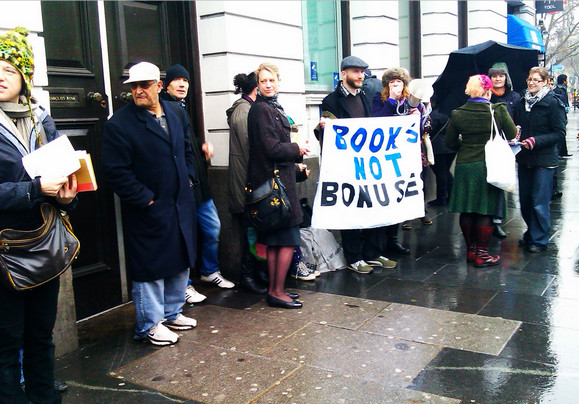 With Barclays Bank paying just 1% corporation tax in 2009 – a paltry sum of £113m after the company trousered record profits of £11.6bn – protesters have targeted their high street branches around the UK to highlight their dodgy tax avoidance shenanigans.

So far, 41 branches have been reported as closed around the UK, with actions still taking place.

Here’s some photos from the Brixton Road, SW9 branch which was closed down by protesters this morning at 11am.

The good part about these protests is that they’re getting the ordinarily dull and oft-ignored facts about Barclays’ tax avoidance antics into the mainstream at a time when we’re being told that we’re “all in it together” and communities are facing massive cuts to services. 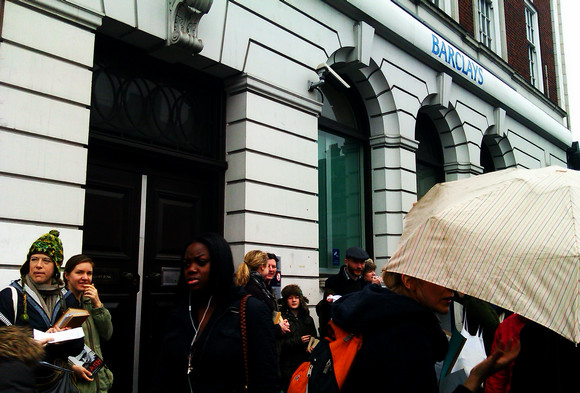 UK Uncut, the direct action group which has targeted companies such as Vodafone, Top Shop and Boots over tax avoidance, is planning nationwide protests against Barclays bank tomorrow.

Groups and individuals across the country have so far planned an estimated 35 protests in large cities such as London, Liverpool, Manchester and Birmingham, but also in small towns such as Millom, Hastings and Lewes [1].

Each protest is expected to come under the banner of the ‘Big Society Bail-In’, which UK Uncut recently launched, saying that the plan wasn’t to shut down bank branches, but to ‘open them up’. They continued, ‘teams of UK Uncut volunteers will be entering the banks, occupying them and transforming them into something that people need, but will be cut’.

In central London, hundreds are expected to set up a live stand-up comedy show, libraries, and a mothers’ breakfast club, all inside different branches of Barclays.

Barclays is being targeted in the same week that it announced profits of some £6 billion, and an enormous bonus pool of £3.4bn, with a personal bonus for the CEO Bob Diamond of £9million.

People are also incredibly angry over Bob Diamond’s refusal to apologise for the banks role in the crisis stating that ‘the time for apology and remorse was over’ .

On Barclays, Ruth Griffiths, 36, said, “The entire banking industry would have collapsed if it was not for the tax payer. It was their greed and reckless gambling that caused the economic crisis. Barclays’ bonuses alone could pay for half of all cuts to local government services.”

Aisha Atkins, 32 said, “There are alternatives to the cuts, for example, making the banks pay for a crisis they created or stopping tax dodging by corporations and the rich. But the government is making a political choice in asking ordinary people pay with job losses and savaged services.”

She continued, “We are transforming the banks into schools, leisure centres and libraries and forests to show that it’s our society that’s too big to fail, not a broken banking system.”

Next Saturday, 26th February, UK Uncut will be targeting bailed-out RBS, just days after it announces its bonus pool of £900m. 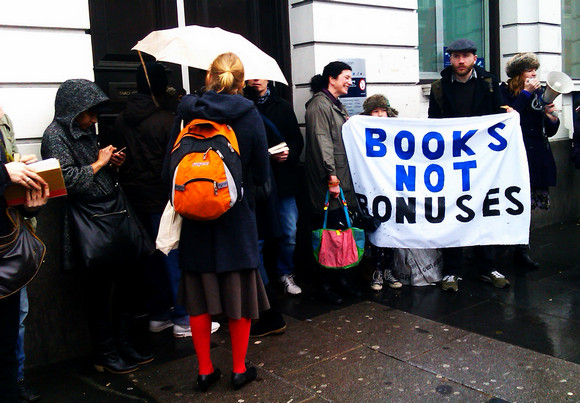 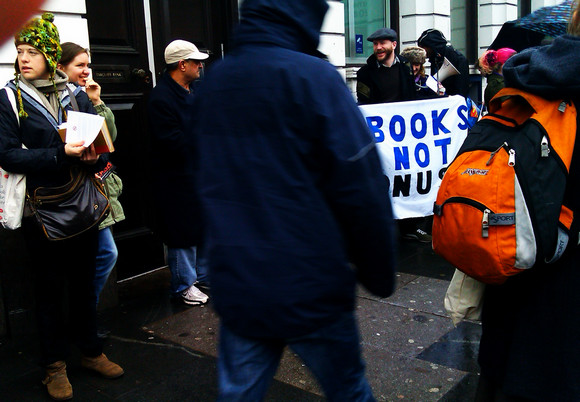 More:
[UK Uncut – Why Barclays Bank was targeted] – [UK Uncut]
[How the Guardian was gagged from revealing Barclays tax secrets]
[Barclays bank forced to admit it paid just £113m in corporation tax in 2009]