I’m saddened to hear that Brighton’s SchNEWS crew have decided to call it a day, after two decades of producing hard-hitting direct action newsletters. 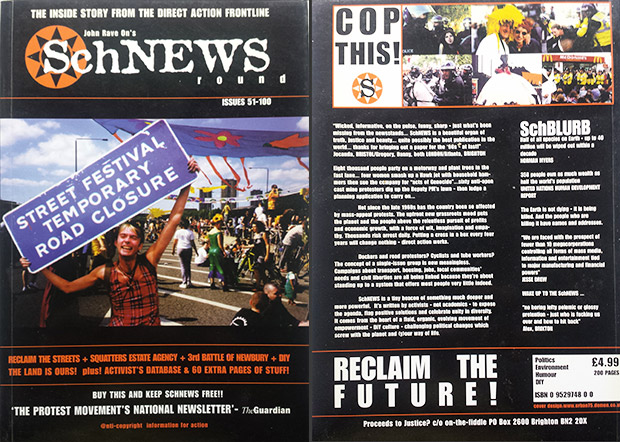 Starting life in the squatted Brighton Court House before moving on to a ramshackle office out the back of an anarchist social centre, SchNEWS proved to be an essential source of alternative party and protest news, covering ‘Reclaim the Streets to Reclaim the Power, from anti-globalisation to anti-fracking, from Bogota to Balcombe (via Newbury)’.

This year we blew the lid off the Infrastructure Bill (and even got a mention in the House of Lords), shone a light on the privatisation of probation, took on Michael Gove’s rewrite of the First World War, stood with Anti-Fascist massive in Tower Hamlets, and took aim how the British government was arming Israel during the bombing of Gaza.

I’ve had links with SchNEWS right from the start – we swapped stories and resources  when I was running the Football Fans Against the CJA campaign – and several of their writers became good friends. I even designed one of their book covers, featuring photos taken from the incredible M41 Reclaim the Streets party.

The SchNEWS collective say they’re now taking a break before launching back into the radical media world to forge new networks, with a new model and new enthusiasm.

So farewell then, SchNEWS. You were inspirational, important, funny and magnificent.