My feature about an old breakwater in Barry Island, south Wales has proved surprisingly popular, and I was pleased to learn more about this intriguing piece of railway history, thanks to Brian Mills.

Brian has sent me some fascinating details about the operation of the breakwater, which I’ve reproduced in full below, along with some archive postcard views. Thanks again, Brian! 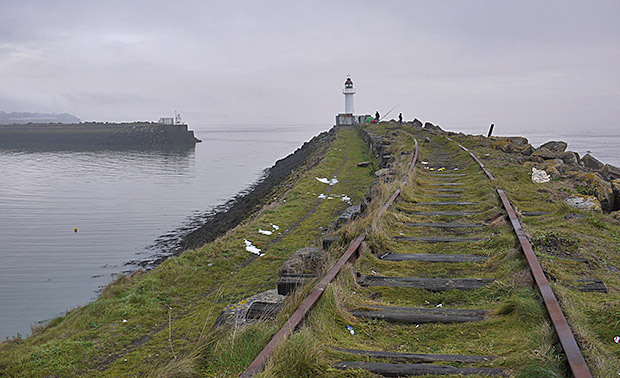 Brian writes: “There appears to be much speculation in relation to the south-west breakwater at the entrance to Barry Docks and the former Barry Pier Railway Station.

Colloquially, the structure was never called a pier and shipping was never loaded from the breakwater. 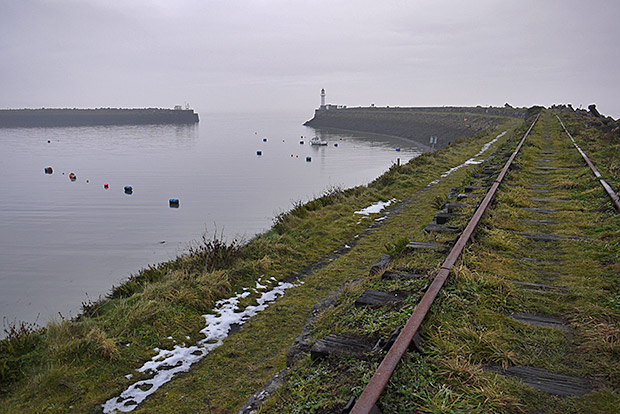 Principally the Barry Railway Company constructed the north-east and south-west breakwaters to promote a “calming” area for shipping entering and leaving the Lady Windsor or Basin locks during the possible ‘ravages’ of the Bristol channel during gales.

The ubiquitous steam crane seen in the early sepia record on this web page and many later photographs was generally used for maintenance/replacement of the heavy timber baulks surrounding the lighthouse and protecting the
masonry section of the breakwater toe. 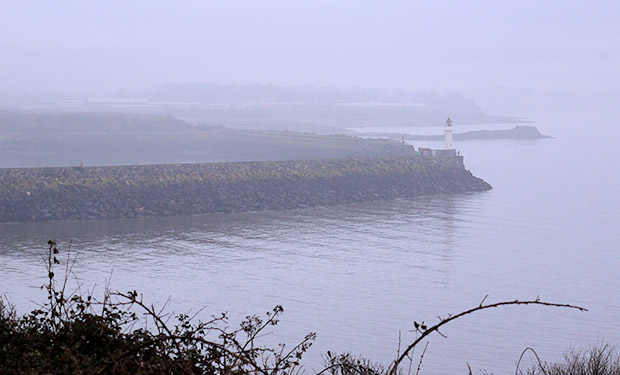 Similarly, the NW navigation beacon on the opposite breakwater was often accompanied by a small crane. After the second world war, a steam crane was often ‘marooned’ on the lighthouse breakwater and pre-1980 some further boulders were dumped along the length of the breakwater (seaward side) which carried a high and low level rail track and which split from a single line long siding near the present yacht club’s building.

Following collisions with ships entering the ‘calming’ area during rough weather after the 1950s, many timbers were damaged and never replaced.

This also applies to the timbers protecting the quays at the entrance to the Lady Windsor and Basin Locks and the NW breakwater and now at low tides one can see the masonry toes devoid of timbers and jutting into the entrance at low tides. 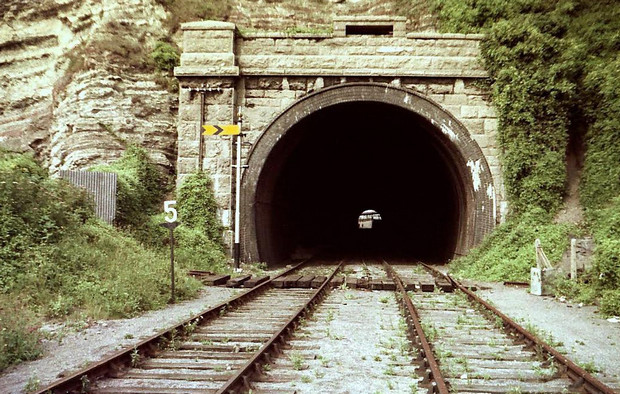 The line from the docks to the west breakwater, crossed at this point where the rails had to be temporarily fixed above the pier lines (delineated by the sleepers in the scene) so that traffic could pass from a natural rock tunnel on the right, to get to the breakwater line which split into a high & low level siding at the Barry Yacht Club building.

The telegraph wire link between Barry Island East ’box and the Pier ‘box was cabled through the tunnel but the short link from the latter to the Pier box was via aerial wires, the insulators and wooden arm still being visible, bolted to the stonework behind the signal.

After the abolition of Barry Pier signal box (behind camera), a ground frame was installed in the tunnel to work a set of points in the bore and the catch point seen in the right-hand line. The operating rodding is just visible running into the loose sleepers. The tunnel is now bricked up here and at the other end a rifle range is housed within the bore. Photo & text © Brian Mills] 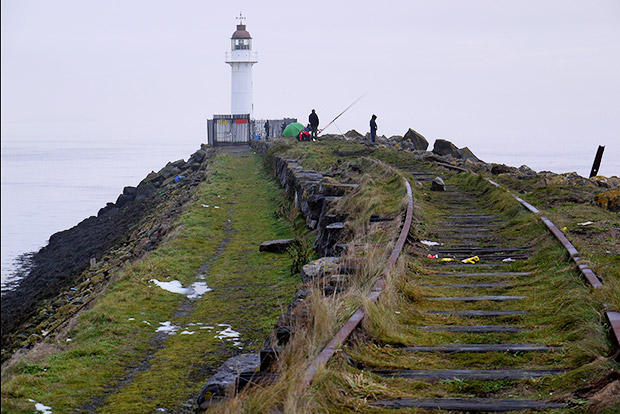 The line itself was fed from the south-east side of No.1 dock near the former C.H. Bailey’s commercial drydock
entrance and the track ran between their buildings and the sandstone cliff-face of the Redbrink Crescent promontory to then pass through an unlined sandstone tunnel to emerge at right-angles to the east portal of the former Barry Railway’s Barry Island (or Pier) tunnel.

The latter carried two tracks into the 4-track Pier station but to cross the two lines at the tunnel exit, a flat railway crossing was never laid.

Instead, when traffic to and from the breakwater was necessary, loose rails on timbers were laid with gauge-ties to ‘bridge’ the void across the passenger lines to the station and removed after a transit. 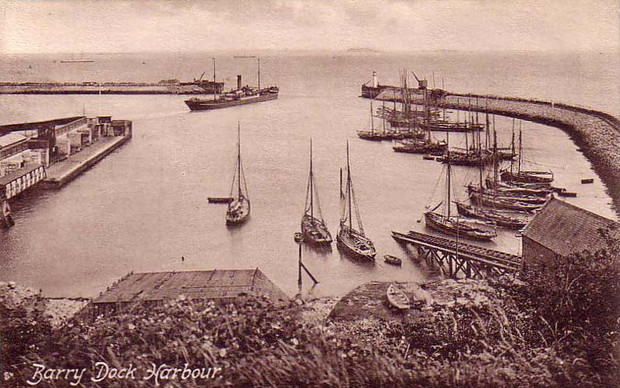 The very clear early sepia photograph (above) clearly shows on the left, the site of Barry Pier railway station with the floating pontoon which permitted boarding onto paddle-steamers at practically any state of the tide.

It also shows the former hydraulically-operated passenger lift which permitted loading of materials and carriage of disabled travellers from station platform level to the floating pontoon or vice versa. 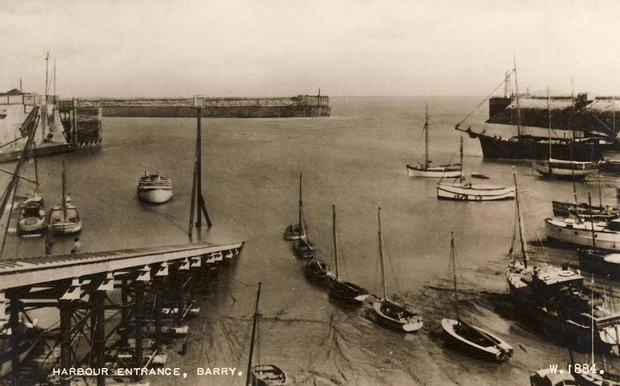 The pontoon was connected at the station booking office end via a two-section articulated bridge link connected to the floating pontoon. All of this is quite clear on the sepia.

It is alleged that some coal ‘bunkering’ of paddle-steamers may have been carried out by bringing coal by rail to the Barry Pier station and then transferring it to the floating pontoon via the lift. 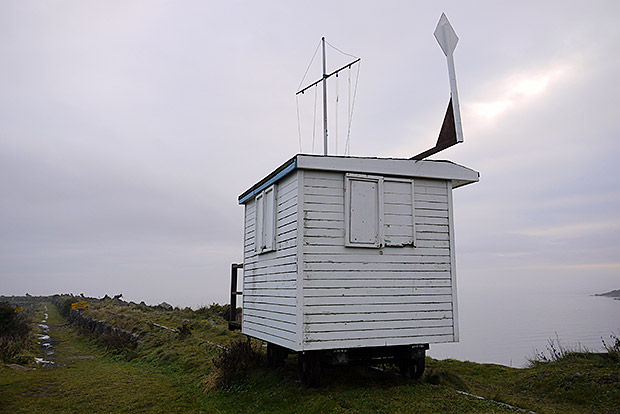 Another query relates to the wheeled white structure on later photographs of the higher level line on the breakwater. It was used when yacht races were set up and it is believed (but not confirmed) that a “canon-shot” was fired from the cabin to signify the start of a race.

There are pictures of the last main line special charter steam and DMU rail excursions to Barry Pier station and one shows the ‘cross-link’ near the tunnel east portal.

A colour record on TRACKBED.com shows the east portal of the pier tunnel with the timbers that previously bore the removable rail link.” 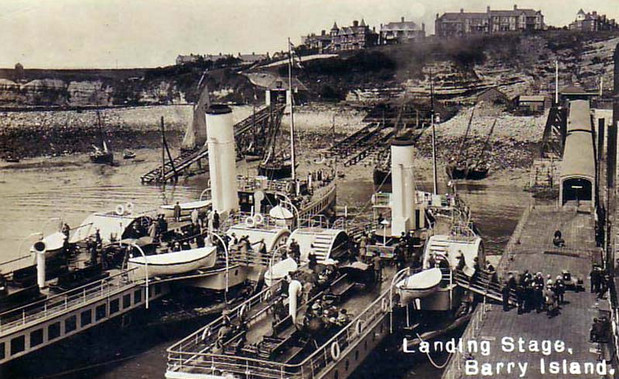 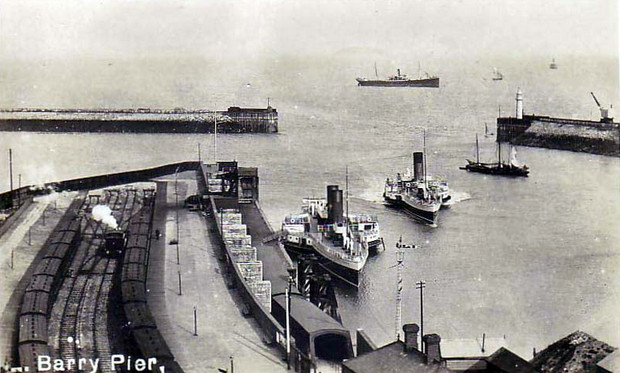 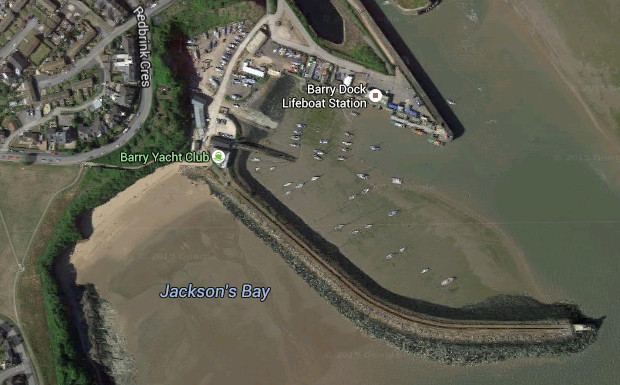 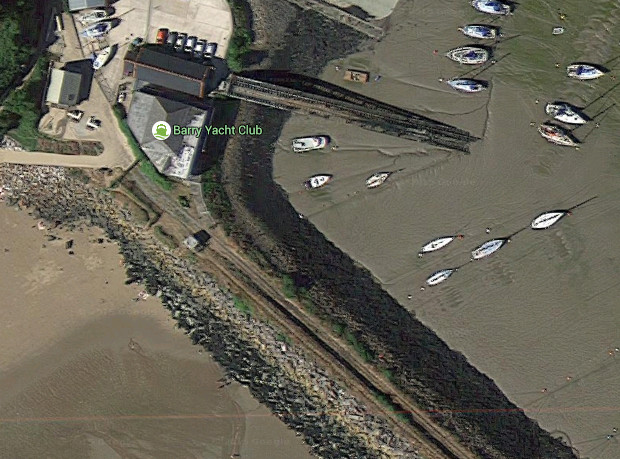 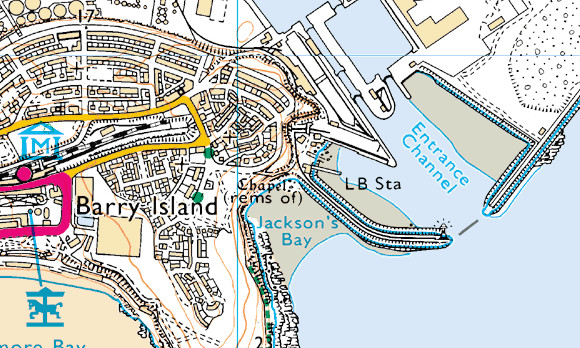 Pubs, a chalky penis and pavement history: a look around the streets of Chepstow, south Wales

One Comment on “Forgotten railways of south Wales: the south-west breakwater at the entrance to Barry Docks revisited”