Founded in 1903 by brothers William and Gilbert Foyle, the Foyles flagship bookstore on Charing Cross Road in central London recently relocated a few hundred yards down the road.

Leaving the premises that they had occupied for over a century, the new store is located in the former premises of Central St Martins College of Art and Design and is a world away from the fabulous disorganisation that used to be associated with Foyles. 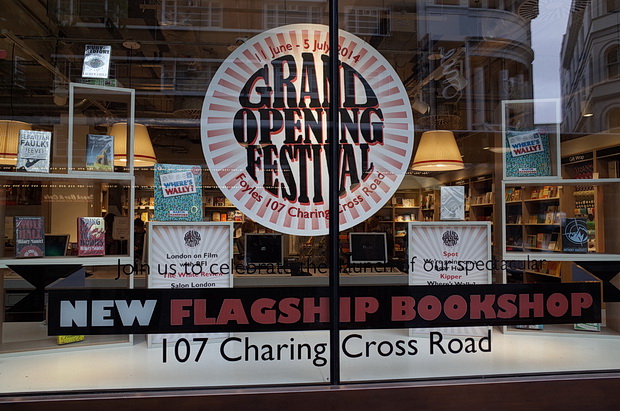 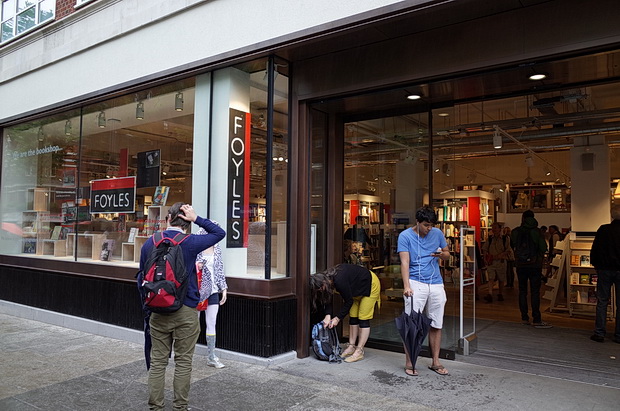 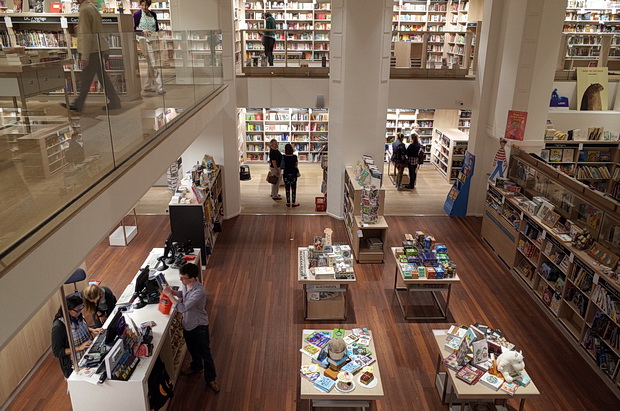 There’s no question that the new store offers a brighter and more enjoyable browsing experience.

The old Foyles: chaos and shoplifting 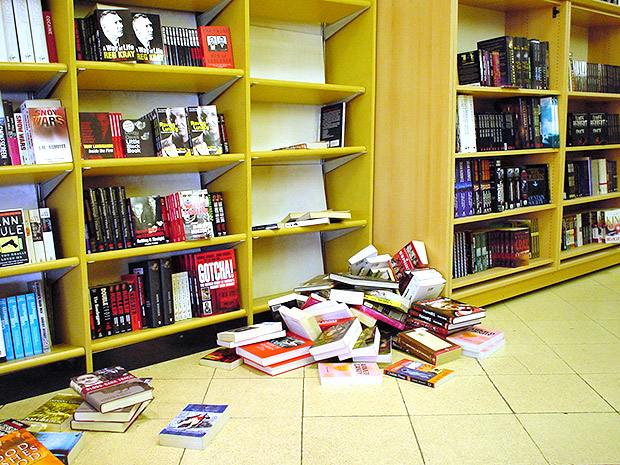 The slick new bookshop stands in stark contrast to the legendary state of chaos that existed in Foyles for decades (above: photo of the bookshop in June 2002).

After control of the shop passed to Christina, the daughter of founder William Foyle in 1945, things went seriously awry.

Staff were famously fired on a whim, and there was a staunch refusal to install any kind of modern convenience such as electronic tills or calculators, nor could any orders be taken by phone.

Visitors to the shop would have to queue up to three times too get their book, as Wikipedia retells:

The shop operated a payment system that required customers to queue three times: to collect an invoice for a book, to pay the invoice, then to collect the book, simply because sales staff were not allowed to handle cash. 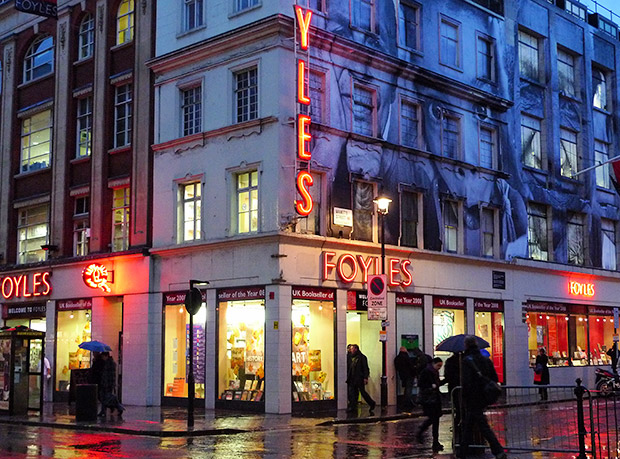 The Independent ran a piece on the bookstore in 2003 under the title, “Still driving customers up the wall after 100 years: Foyles, the bookshop that time forgot”:

For decades, Foyles has been a shopper’s nightmare, with miles and miles of haphazardly arranged titles, non-English-speaking student staff, and a payment system apparently designed by a Victorian lunatic. “It was a byword for dreadful bookselling,” said Nicholas Clee, editor of The Bookseller. “They never answered the phone, the assistants never knew anything, and were hired and fired in six months. You could never find any book you wanted.”

Would-be buyers had to queue twice. “There weren’t any tills or cash registers,” remembers The Independent’s Christina Patterson, who worked there (and was fired after five weeks) in the mid-80s, “You sat in a little wooden box, and people would have to bring you dockets hand-written by the assistants. I dreaded being asked for help. I couldn’t confidently have said which floor I was on.”

The trouble was Christina Foyle, who hated any signs of modernity. She refused to allow computers or electronic tills, and spent no money on refurbishments. Her attitude to staff was autocratic: once she fired 40 women for “talking too loudly”.

The chaotic purchasing system and loose stock control also made it extraordinarily easily for books to be taken without payment.

Even legendary actor Richard Burton took advantage of the opportunity to nab some freebies, as he wrote in his diaries:

I told [Elizabeth Taylor] that while up at Oxford and in the RAF I would, when ever I could, go to London for the weekends and steal books from the giant Foyles in Charing Cross Road. I told her how I used to do it. During the war, when I did my best stealing, there was an acute shortage of paper and Foyles couldn’t wrap the books up as they do nowadays. I would buy one book and pay for it. The assistant would give a receipt which I would ostentatiously leave hanging out of the pages of the legitimate purchase. Now whether one bought one book or ten you still had only the one slip of paper to show for it. I would then pick up one or two Everyman’s, taking a long long time – as much as an hour sometimes before I sauntered quietly out of the shop. I must have stolen scores of Everyman’s in this way. 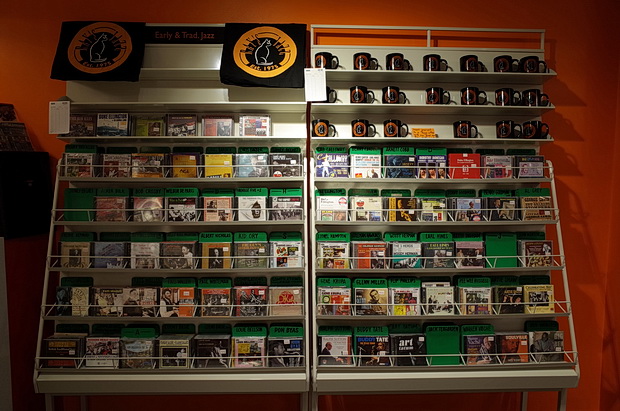 Back to the new store, Ray’s Jazz department  is now on the second level, but is sadly now divorced from the store cafe that used to bear its name. 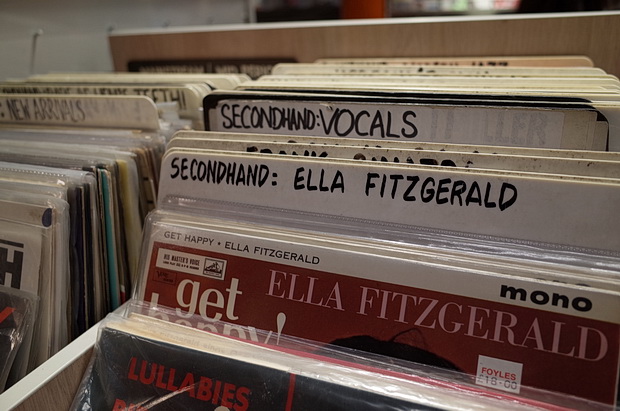 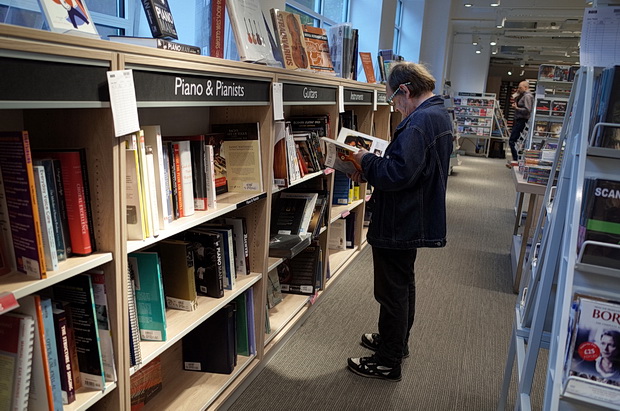 Foyles has an unrivalled selection of music books and scores. 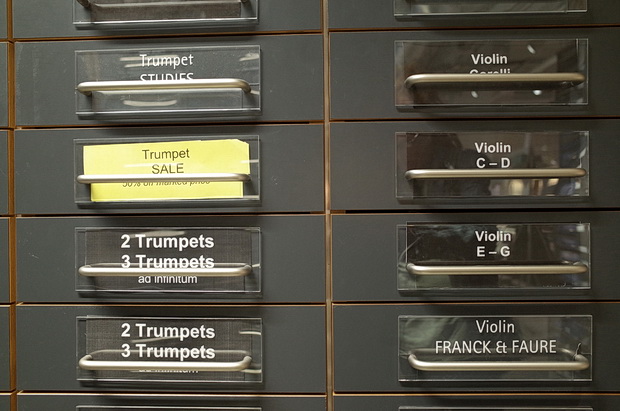 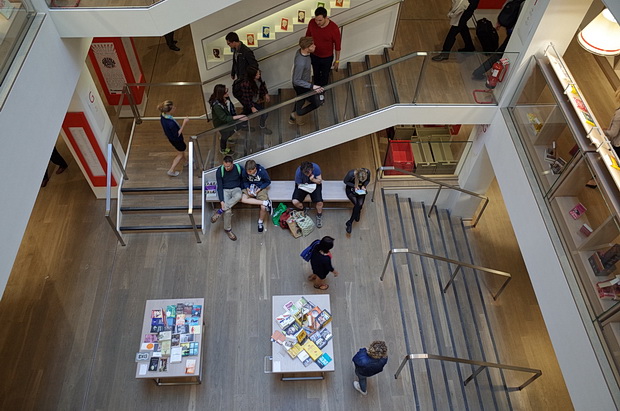 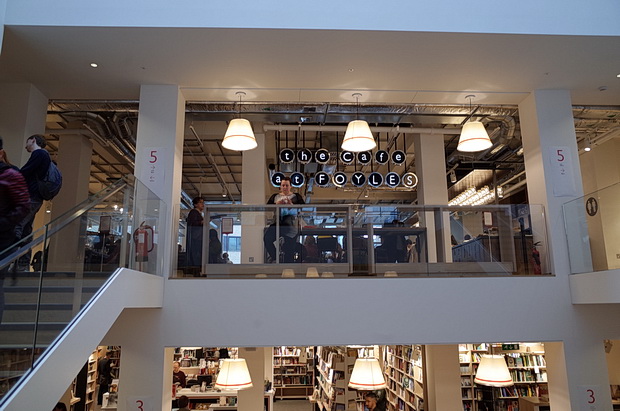 The cafe now sits on the top floor. It’s a shinier – and more expensive – kind of place, and much like the Photographers Gallery, has lost a lot of its character in the move.

The old Foyles cafe used to be one of my favourites, but I’m not sure I’ll be coming here that often. 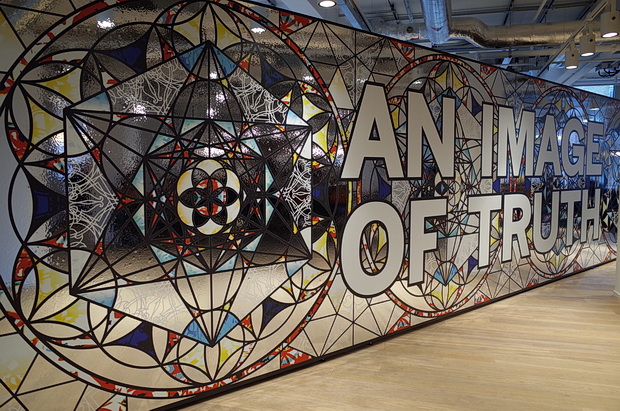 Artwork in the cafe. 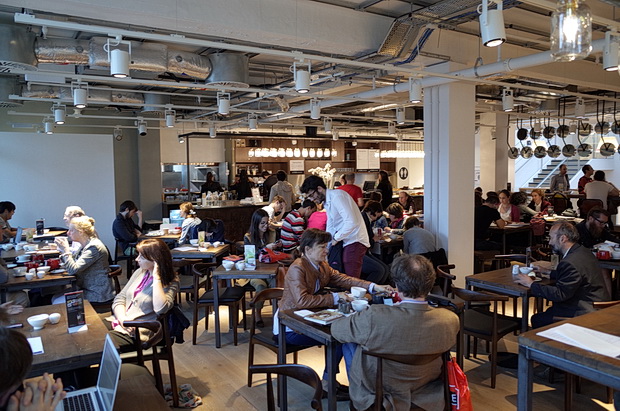 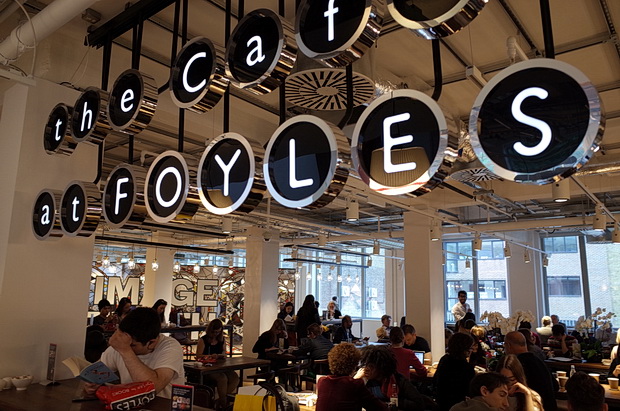 There were some mightily miffed customers when I was there.

They had ascended the heavens up to the 5th floor cafe only to be told that they had stopped serving at 5:05pm. The website says that the cafe closes at 5.30pm but you might have thought folks could at least get a coffee till 5.15pm or something. 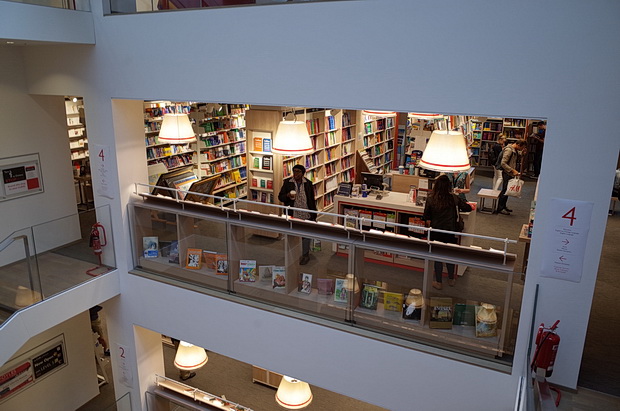 Looking down from the top floor. 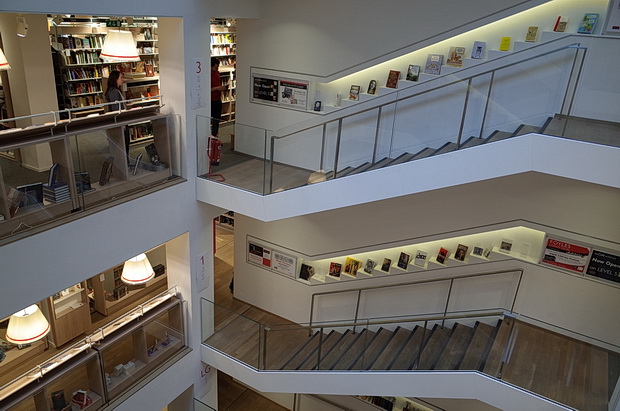 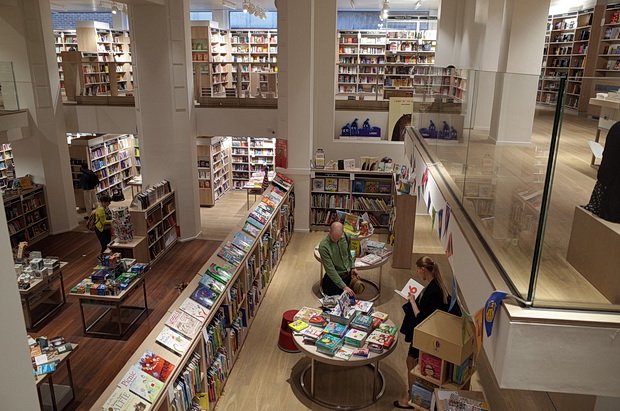 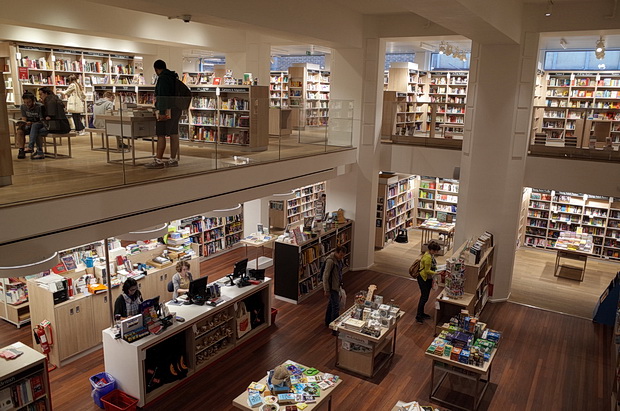 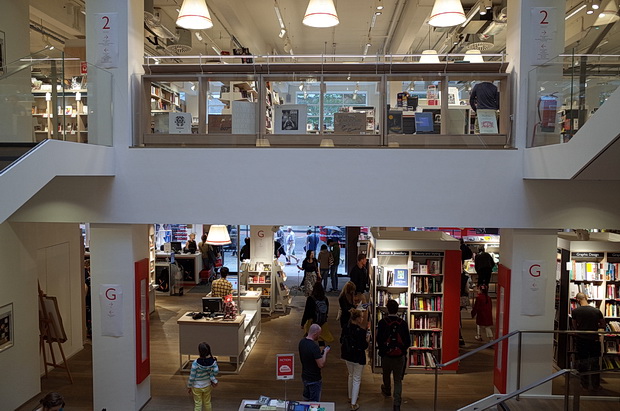 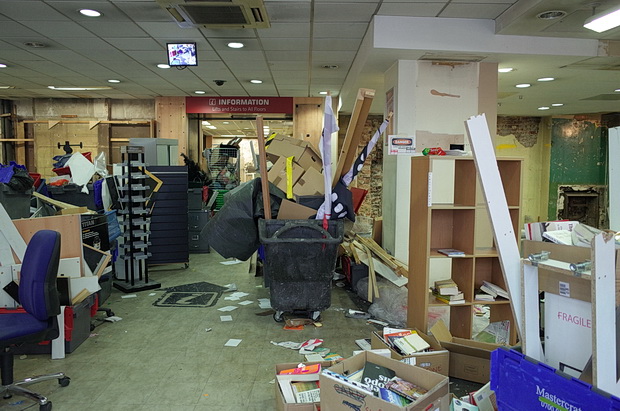 Situated a few doors up the road, the former bookstore has been thoroughly stripped. 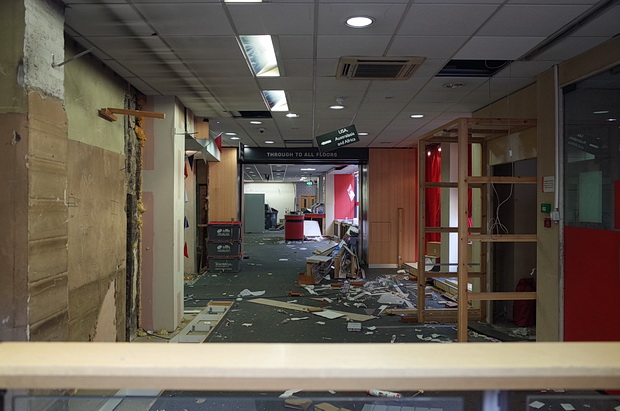 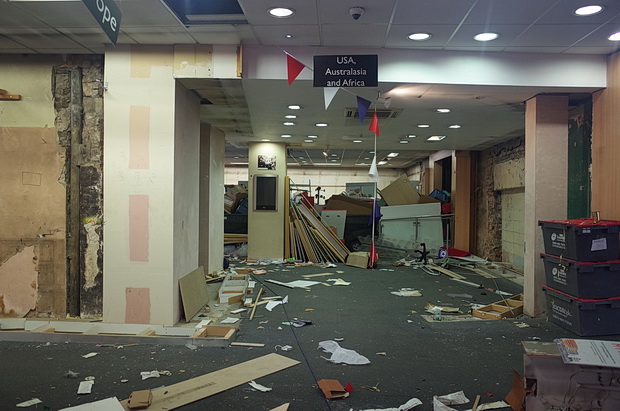