All the video and photographic evidence leaking through into the mainstream from the G20 protests is going to make it really hard for the police to try and stretch anti-terrorism legislation to cover banning photography at future demos. 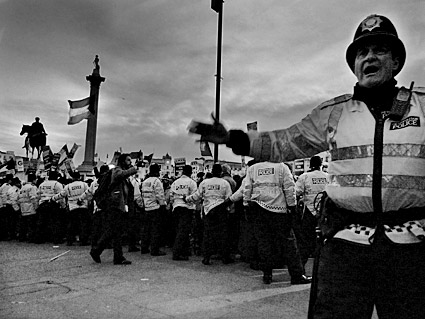 Surely even the most right wing media must now appreciate the importance of recording protests from all sides now.
Even if the police do try and implement terrorism laws to force photographers to hand over their cameras and video footage, new mobile streaming technologies will soon make it a redundant gesture.

Using fast 3G connections, protesters will be able to take movies/photos on their mobile phones and upload them directly onto YouTube from within the ‘kettle,’ so there’s no way the cops can stop the footage getting out (unless they delve even deeper into their dodgy powers and force a mobile signal blackout – a move which would surely prompt questions from the general public).

Quite a few phones are already capable of uploading videos directly on to websites and as the technology becomes more commonplace it’s going to become increasingly difficult for the police to try and suppress legitimate press and personal coverage of demonstrations.

More info: Photographers Rights And The Law In The UK

Photographing protests in the UK