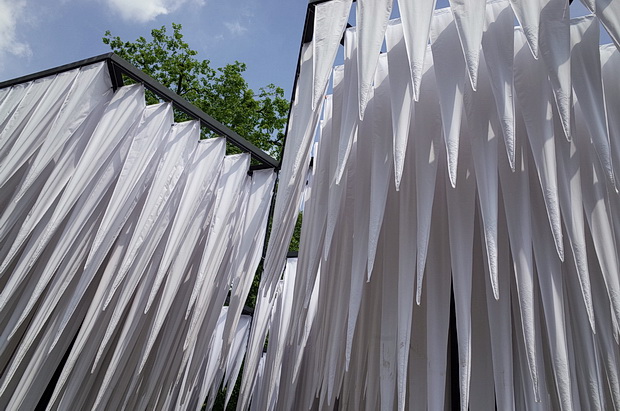 Standing outside the London’s Architectural Association’s offices in the square, here’s how their website describes the piece:

Rainforest is a public pavilion by Chilean-German architecture practice GUN Architects, installed in London’s Bedford Square during the Summer of 2014. An imposing five metre high micro-climate of minimal tree-like structures with a field of pyramidal fabric ‘stalactites’ which gently drip water – the pavilion is an oasis in the centre of London. Visitors can sit beneath a canopy of inverted prisms to enjoy a forest-like environment of raindrops, pools and plants.

Rainforest is part of GUN Architects’ exploration into natural dynamics in the diverse Chilean climate – making water a protagonist of the architecture, where the production of temporal atmospheres is based on water circulation and accumulation. The practice engages in architectural and urban projects rooted in the environmental and cultural context of Chile, attempting to develop design forms which are consistent with current urban expansion and its associated geographical conditions.

An exhibition in the main AA Gallery (until 14 June) accompanies the pavilion and describes the development of Rainforest through earlier research by GUN Architects, the pavilion’s conceptual evolution and technical engineering. The exhibition also features photographic works by Cristóbal Palma and Helene Binet. 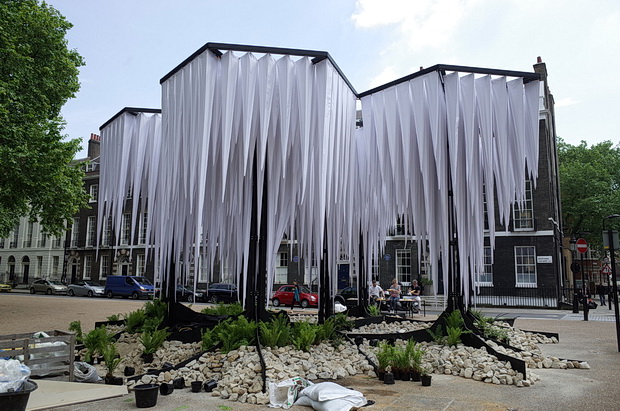 The installation forms part of the 2014 London Festival of Architecture, which is an annual event that “celebrates the city’s role as a global hub of architectural experimentation, thinking, learning and practice.”

The festival takes place between the 1st and 30th of June, while the pavilion will remain in Bedford Square until 19th July 2014. 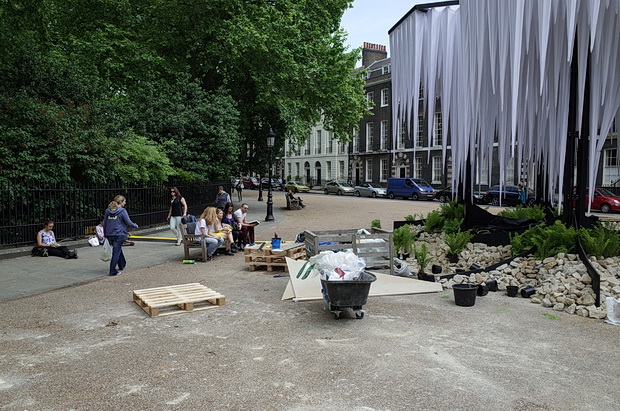 I wasn’t sure what to make of it myself  – to be fair it  hadn’t quite been completed when I saw it, but one Bloomsbury resident certainly wasn’t very keen at all:

You can see the sculpture for yourself at the south-west corner of Bedford Square, London, WC1B 3ES (nearest tubes: Tottenham Court Road/Warren Street).