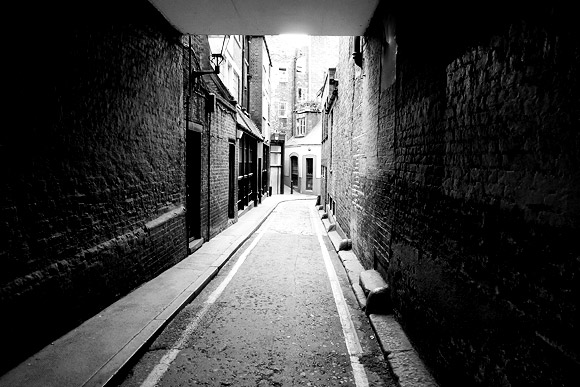 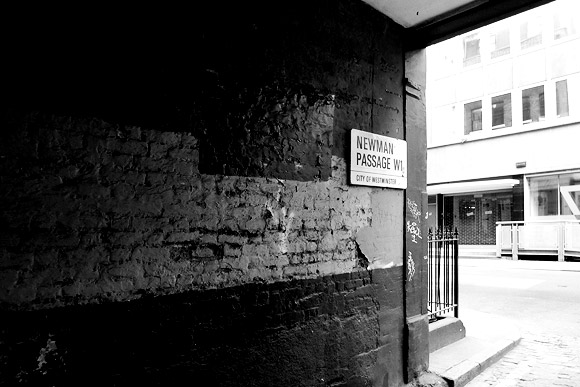 The passage winds east from Newman Street for a hundred yards or so, before splitting into two, with the cobbled lane turning sharply south to form a cul de sac, while a narrow alley to the left takes you into Rathbone Street, passing under the Newman Arms pub. 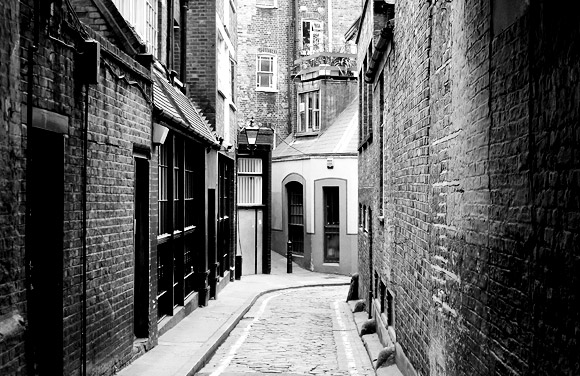 Approaching the bend in Newman Passage, with the alleyway branching out to the left. You almost expect to see Sherlock Holmes to come flapping into view. 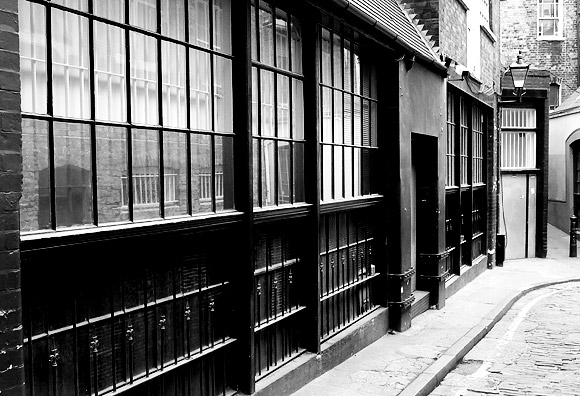 Dating from 1746, Newman Passage forms part of the Berners Estate, and in the late 19th Century – when  Bloomsbury was a hotbed of anarchist, radical and other political types – it housed a co-operative kitchen for communist refugees.

More recently, the passage was a setting for a murder in the 1959 film, film Peeping Tom, which saw the grisly tale of a prostitute being picked up a punter in the passage (try saying that after a few beers) before being promptly murdered above the pub. 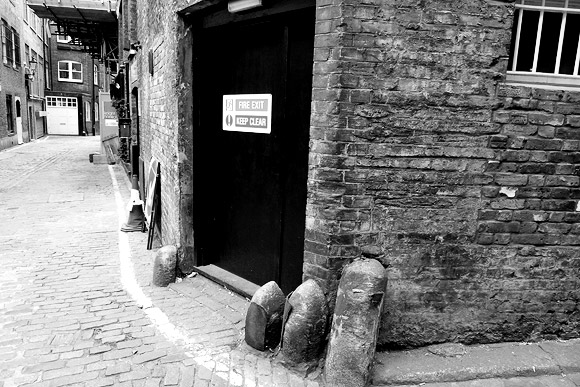 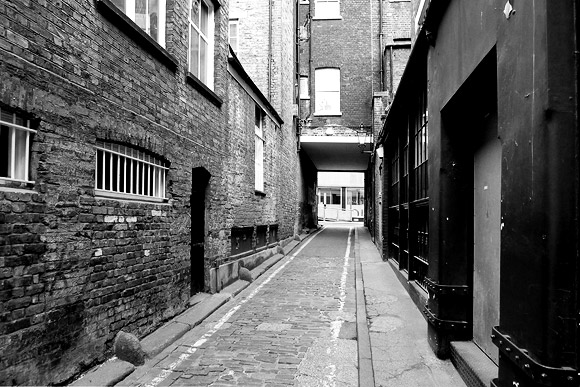 Looking back towards Rathbone Street. 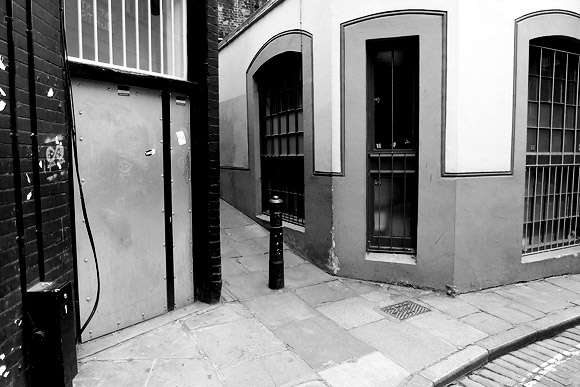 A crooked lampost used to stand in front of the bollard and was famously seen in the opening credits for the much-loved TV series ‘Minder.’ 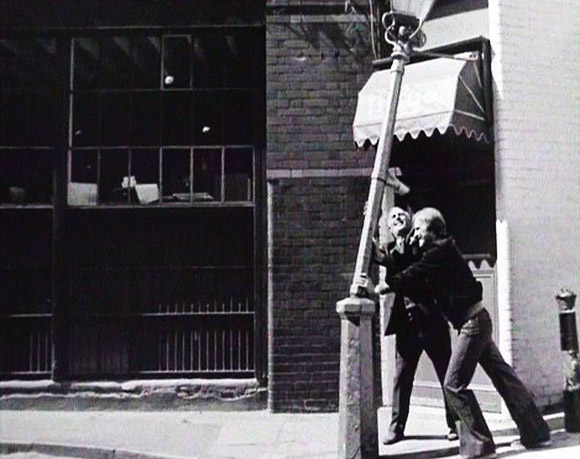 Still from ‘Minder’ opening credits, with Arthur’n’Terry ‘holding up’ the bent lamppost. 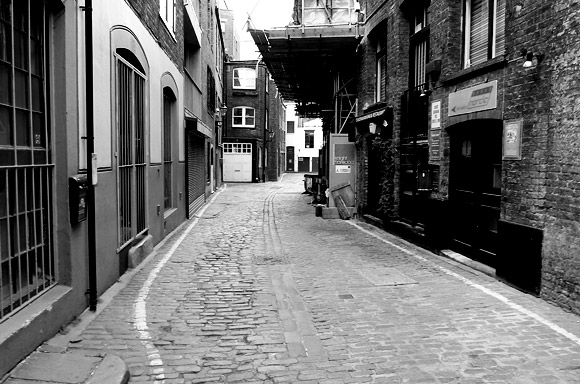 Looking south along the cobbled street to the cul de sac. 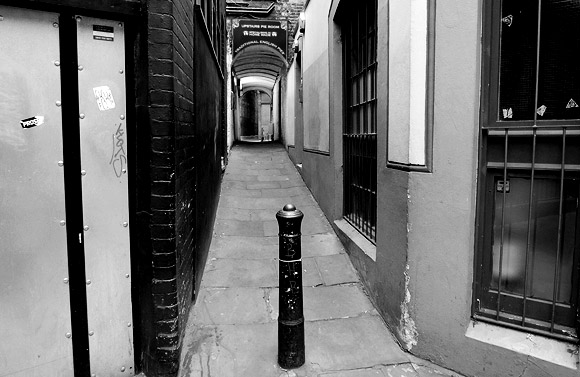 The alley heads east under the Newman Arms onto Rathbone Street.

In case you’re wondering, yes, there is enough space to manoeuvre a Barclays Bike past the bollard. Just! 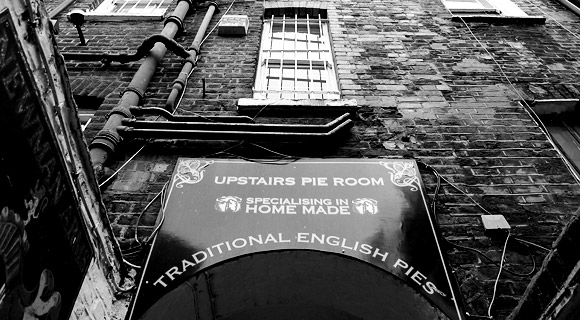 Looking up to the pub’s Pie Room on the first floor. 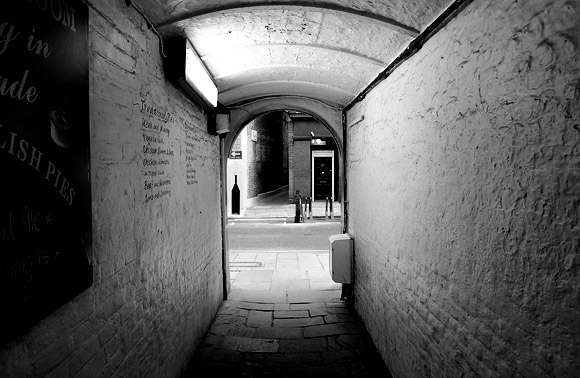 Rathbone Street ahead. You can cross the road and continue to Charlotte Street via the amusingly named Percy Passage. 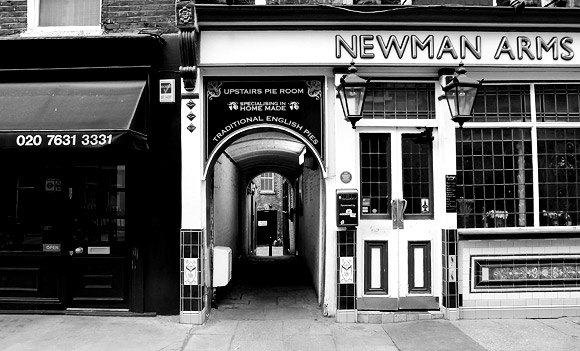 The Newman Arms on Rathbone Street. Built in 1730 and located at No. 23 Rathbone Street, the building became a pub in 1860, previously being used for housing a tallow chandler, an ironmonger, a picture framers and finally a brothel.

George Orwell and Dylan Thomas were said to be regulars, and  the pub claims to be the only family run hostelry in Fitzrovia.

Charles Dickens Walked Past Here, Big ships on big lorries and other pics 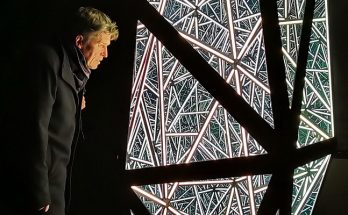 6 Comments on “Newman Passage, Fitrovia – a walk into London’s past”