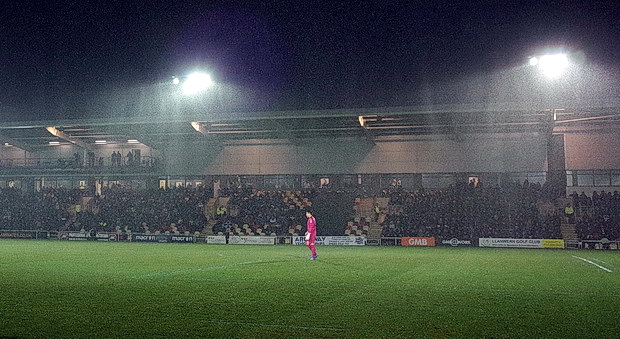 With the rebranded and corporatised Cardiff City no longer on my sporting agenda, we travelled to Newport on a wet and cold Boxing Day afternoon to watch the home team take on Plymouth Argyle in League 2. 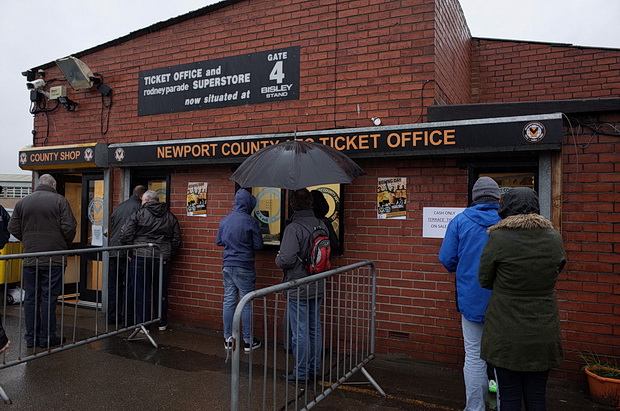 Ticket Office and notice for the, err, Superstore

Newport play at the Rodney Parade stadium, which is shared (and owned) by Newport Rugby Football Club.

Located close to the centre of town, it’s a curious affair, with the ticket office and main bar a considerable distance from the stands, being situated at the far end of the adjacent training pitch. 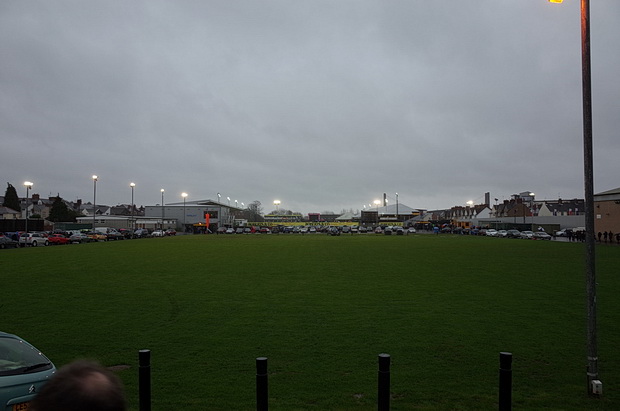 View from the bar

Last time I saw Newport County play was at their old Somerton Park ground, a splendidly knackered old ground that was full of character.

Unfortunately, Newport suffered a series of calamities from the late 1980s onwards, eventually going bust in 1989 and, after reforming, losing Somerton Park in 1993 over historic rent debts.  [—] 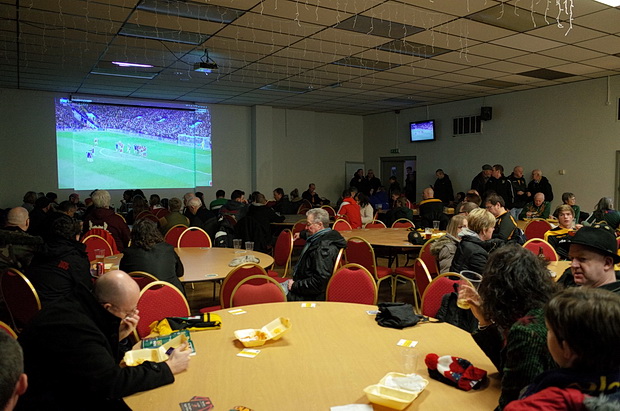 The weather outside was frightful, so much beer was needed for the upcoming 90 minutes. Here’s a view taken inside the large and rather soulless bar dominated by a large video screen that was set up in such a way that you couldn’t see the score in the top right hand corner.

Mind you, I liked the fact that the Chelsea game was immediately taken off and replaced by the Cardiff Blues vs Newport Gwent Dragons rugby game when it started. 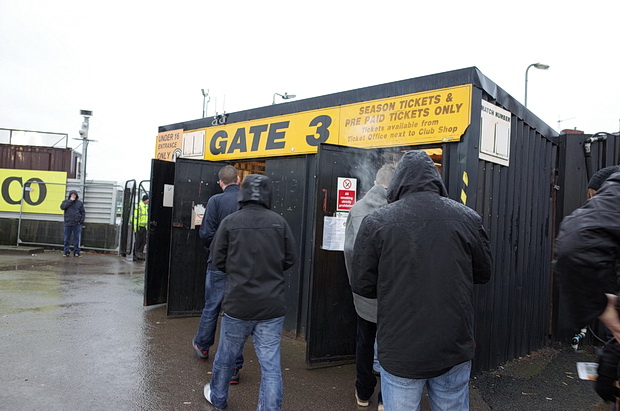 We quickly hiked to Gate 3 and took our place in the two-tier Hazell stand, which has just under 2,000 seats and a standing terrace.  Naturally, we opted to stand. 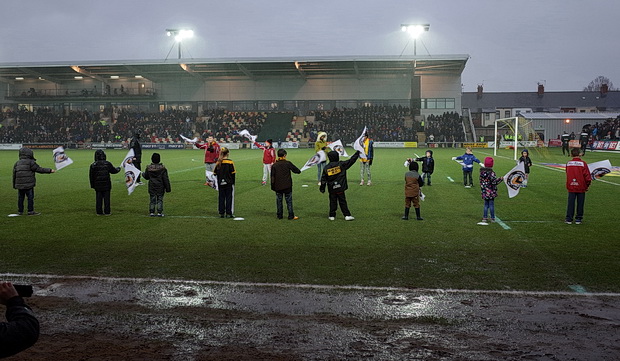 These poor kids had to wave flags about in the pouring rain. 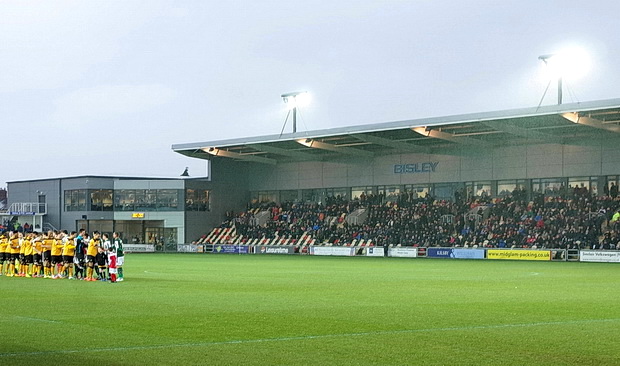 The new Bisley stand offers over 2,500 seats and 13 hospitality boxes for the brechdan corgimwch brigade.

The attendance of 5,020 was Newport’s highest this season. 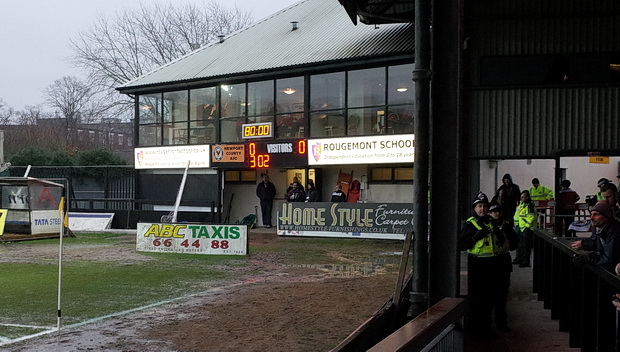 The ground’s rugby heritage is reflected in the electronic scoreboard, which remained stuck at 80 minutes. The lower board strangely added a 3 and a 4 to the first and second half times respectively. 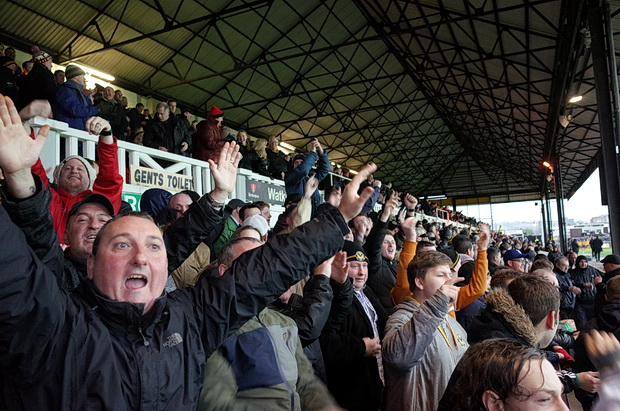 Newport scored in the 9th minute, prompting the home crowd to remind the travelling Plymouth support that it was “1-0 to the sheepshaggers.” 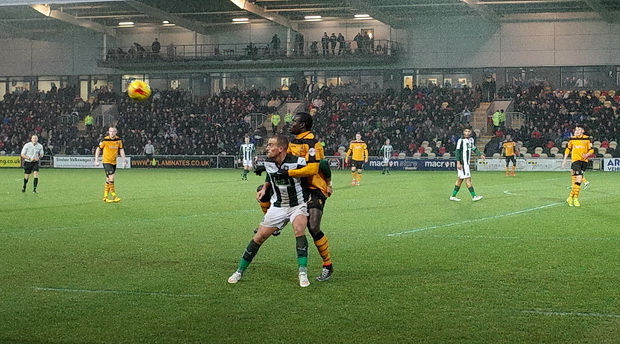 It was end to end stuff during the first half, with the rain never stopping. Newport looked the strongest team though, and launched a wave of attacks. 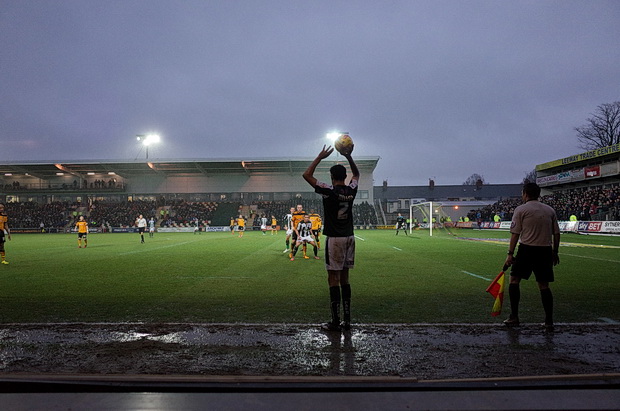 Despite the conditions, the pitch was on fabulous condition. 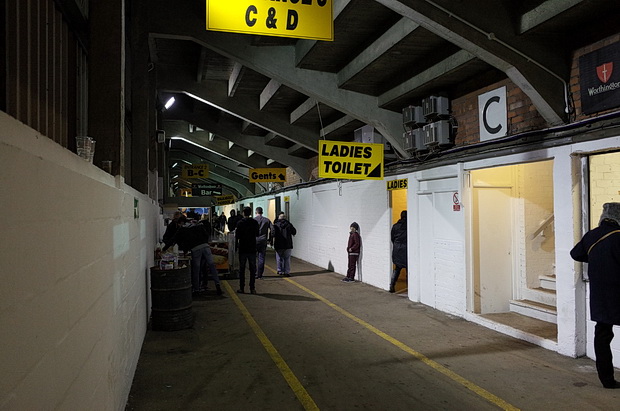 Here’s a view of the basic facilities behind the Hazell stand. 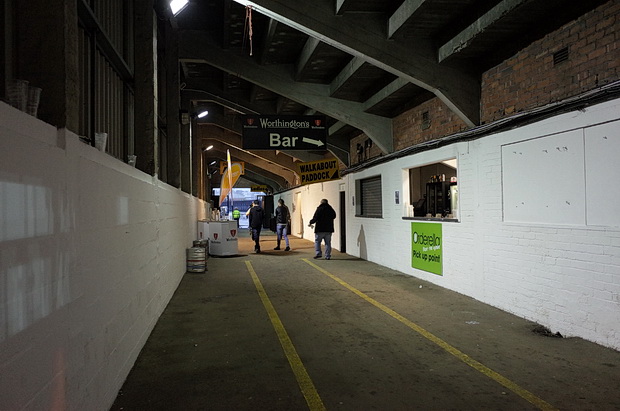 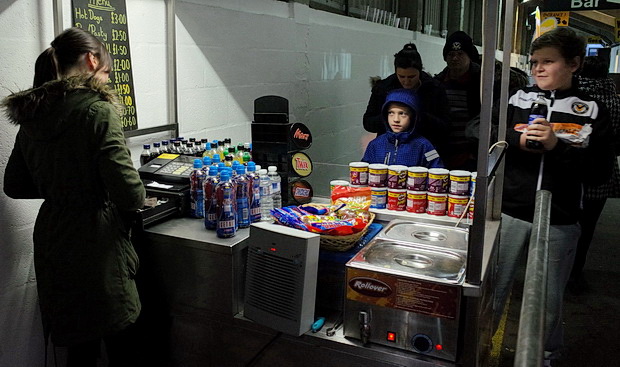 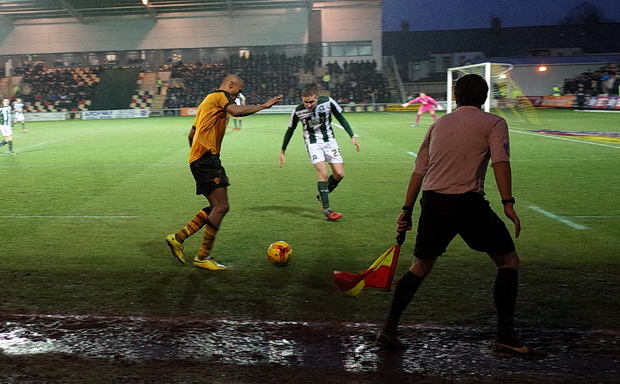 Newport continued the pressure as soon as the second half started. 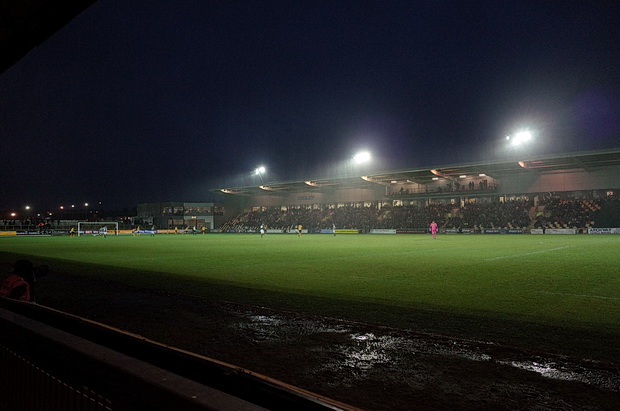 Plymouth came close not long after the break with their first effort on goal, and only a sprightly save by the Newport ‘keeper prevented them equalising in the 50th minute. 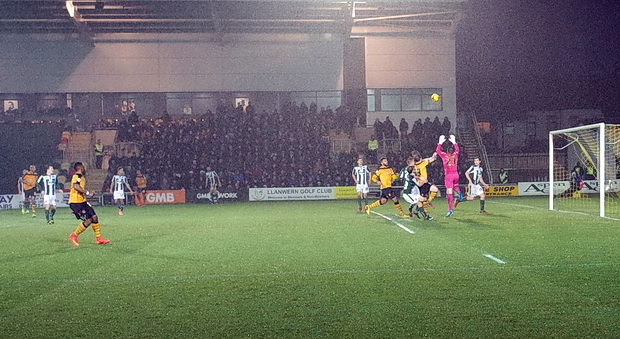 Newport still looked to be in command of the game though, and the fella in the bright pink outfit was kept busy all afternoon. 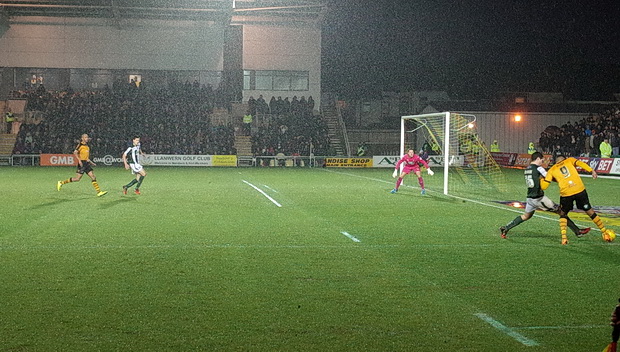 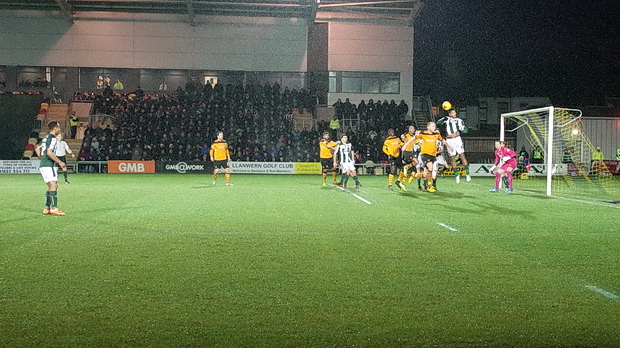 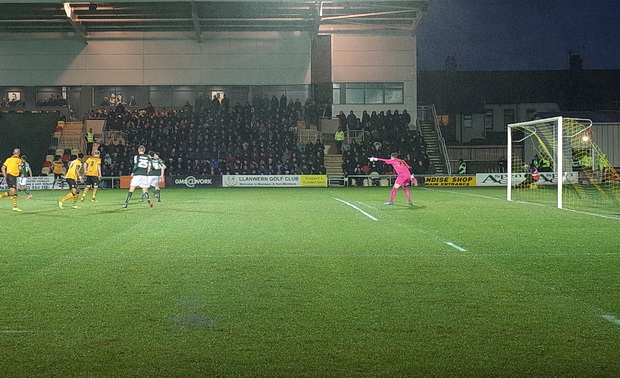 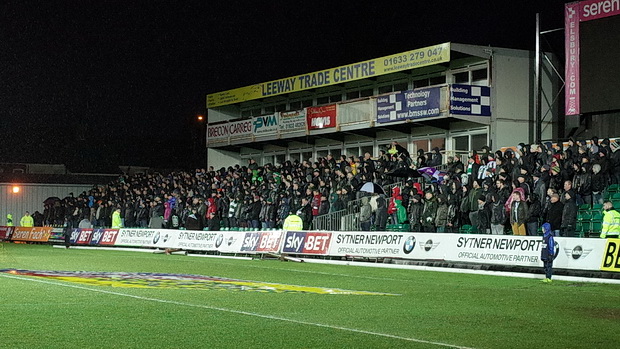 The Plymouth supporters were forced to stand on uncovered, open terracing, and with the rain pelting down all afternoon, it must have been a miserable experience.

They still made a pretty good noise though. 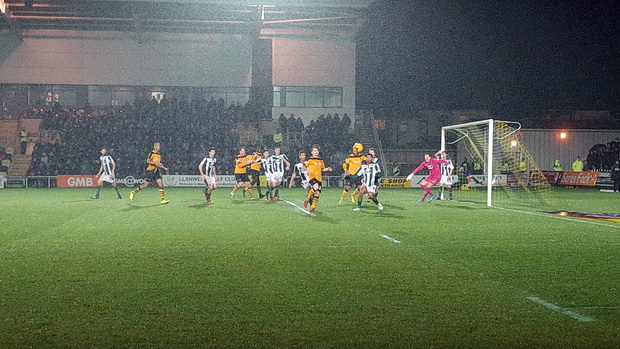 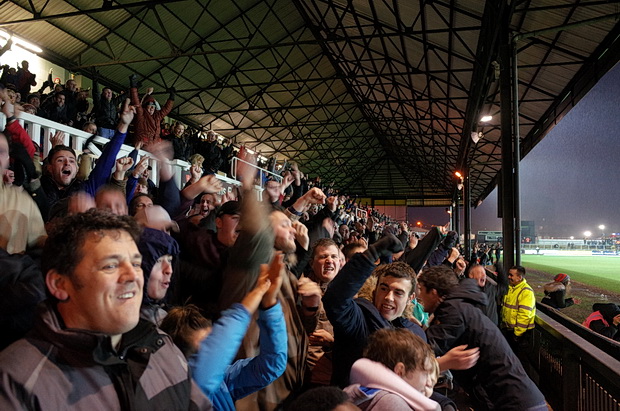 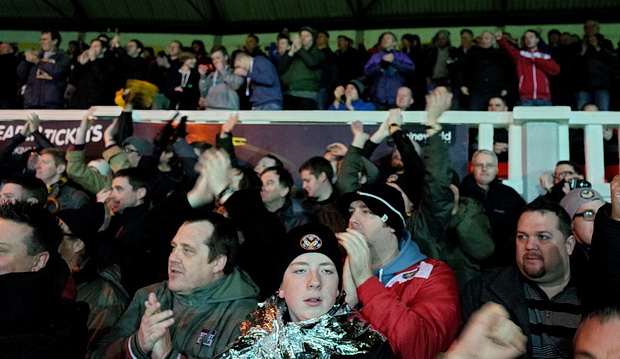 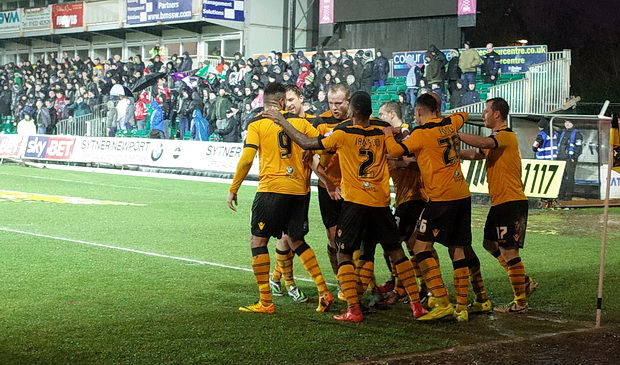 The second goal seemed to knock the stuffing out of Plymouth, who looked resigned to their fate for the final ten minutes. 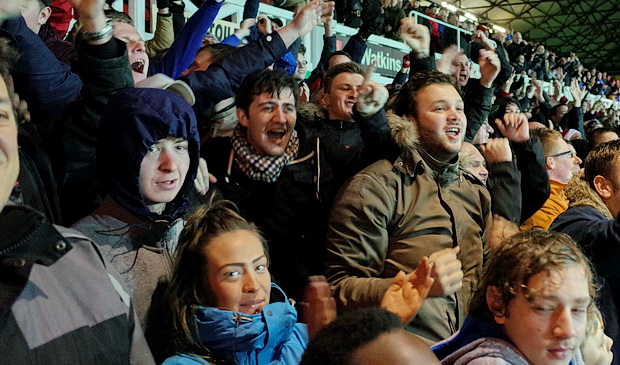 I enjoyed my trip to Rodney Parade – in many respects the atmosphere reminded me of Cardiff City when they were in the old Division Four – and once again I realised that I have no desire to ever go back to the higher divisions.

Standing on open terracing is an essential part of the football experience for me, although that experience is at its finest amongst the wonderful Dulwich Hamlet rabble.