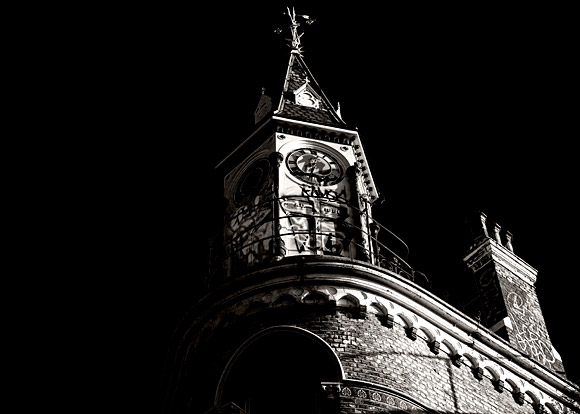 It’s long been one of my most loved Brixton landmarks, and it’s a tragedy to see the distinctive six sided clock tower of the old Railway Hotel (Brady’s), 20 Atlantic Road, Brixton continuing to decay after decades of neglect.

The clock’s hands stopped moving years ago – the internal workings had long seized up – and year after year more crap graffiti is daubed over the fine ironwork. 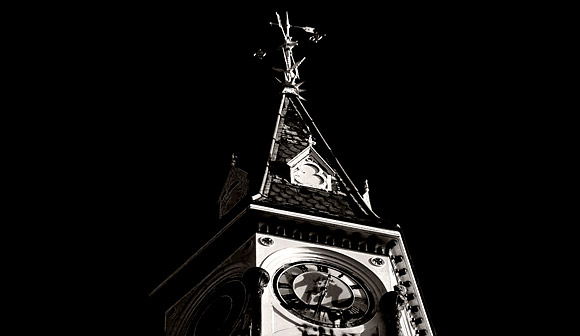 Built in 1880, the Railway Hotel has always operated as a hotel/pub, and by the 1990s had achieved a certain notoriety as a late night drinking destination with a distinctly Bacchanalian air about it.

Compulsorily purchased and closed in 1999, the building was squatted the following year with the front bar being reopened and art/poetry events put on for local artists (and drinkers).

The old music room at the back was slowly cleared up too – a truly fearsome task by all accounts – and events were also put on there (I gave a talk there about web design and activism just before the place was finally evicted in 2002).

Since then, the building has criminally been left empty, and  the plight of the Railway Hotel remains  a thorn in the side of many Brixtonians. 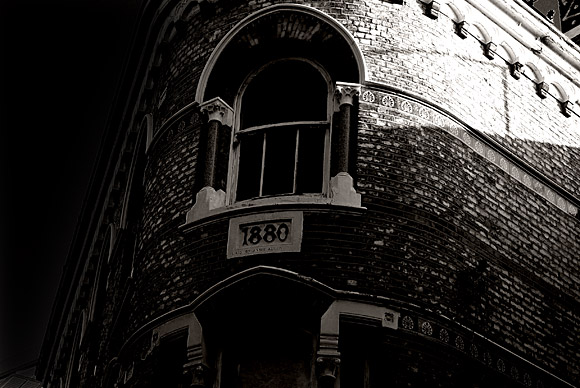 The tower is unusual in that it has six sides – designed so that passengers on the passing rail tracks could read the time – and the cast iron panels are both intricate and pleasing to the eye, with a delightful spire and weathervane capping off the construction.

I managed to get up inside the clock tower when the building was squatted and was disappointed to see that the clock mechanism seemed beyond repair.

Let’s hear it for Annie

On both the clock tower and above the first floor corner window can be seen the date of construction proudly displayed, with the latter adding, “LAID BY ANNIE ALLEN.”

I don’t expect that Ms Allen would have expected that this fine building would later play reputedly host to Jimi Hendrix and The Clash, and later on Alabama 3, but I’m pretty sure she wouldn’t be too chuffed with the people responsible for letting it get into its current parlous state.

I managed to find out a little bit about Annie: she was born in Norwood in 1863 – so would have been just 17 when she laid the stone – and she was married to James Cobb Pidgeon in Christchurch, Dorset in 1889.

They were both living at the Railway Hotel in 1891, but by a decade later they had moved onto Raleigh Lodge, Brixton Hill, Brixton with their three children, Emily, Annie and George, along with three servants. 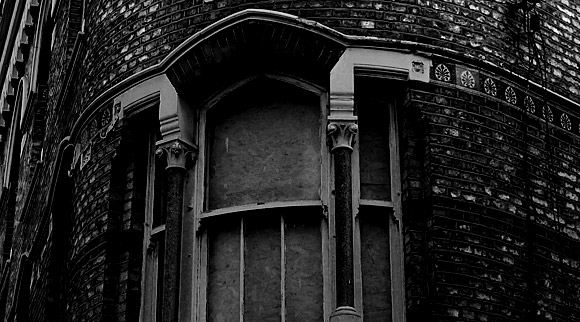 Let’s hope this beautiful Gothic Brixton landmark gets put into use again soon, before it’s too late.

There is some hope on the horizon though, with local campaign group ABC Brixton pushing ahead with plans to restore and regenerate the building. I wish them luck!

More: Read the History of Railway Hotel/Brady’s or discuss Brady’s on our bulletin boards or check out our Lost bars of Brixton feature.

Could Brixton Bradys (Railway Hotel) be coming back as a pub?

Direct action at Brixton Starbucks on 8th December – bring your kids and turn it into a One O’Clock Club!