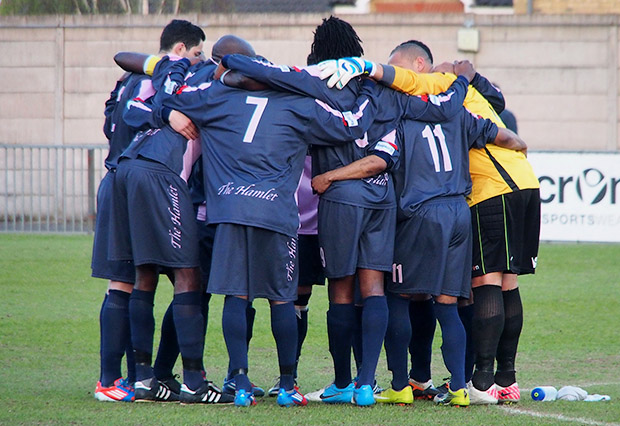 With just two games left in the season and promotion rivals Maidstone three points behind, this was a must-win game for Dulwich Hamlet. And win they did! 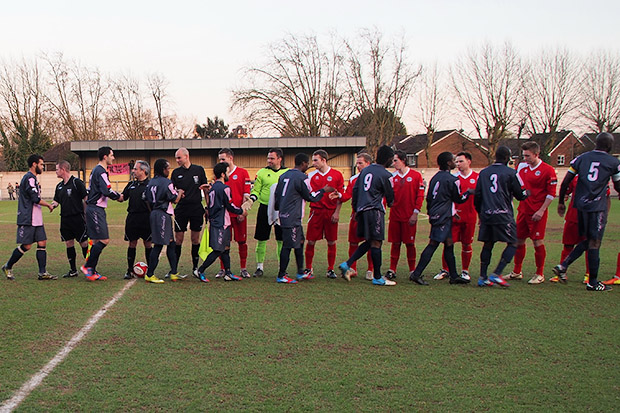 The weather was perfect for an evening of drinking and watching football, with the balmy conditions making a change from the rain and snow storms that have accompanied recent visits to Champion Hill.

Being April 23rd, fans were invited to create a ‘St. George’s celebration of colour,’ via this posting  on Dulwich’s website:

There are some out there who have their own agenda for St. George’s Day, in society, who use the occasion to peddle their myths and lies about asylum seekers, refugees and foreigners in general, to push their ‘ English’ cause. You won’t hear any of that at Dulwich Hamlet!

As a Club we are proud to be based in our great capital, where our fanbase is the most vibrant, buzzing & all-inclusive of the London non-league clubs.

We don’t care where you are from, or what your heritage is, as long as you love PINK & BLUE! Why not help the Hamlet celebrate the fact that London is the greatest city in the world, where people from all creeds and countries mix together, indeed play football in the same Dulwich Hamlet teams by bringing a St. George’s Dulwich Hamlet decorated flag to the Crawley Down Gatwick game, if you are proud to be English?

And if you are not English yourself, but love being in England then why not have your own flag behind the goal alongside, from the country you are from, or where you feel your roots are, and we can have a riot of colour behind the goal! 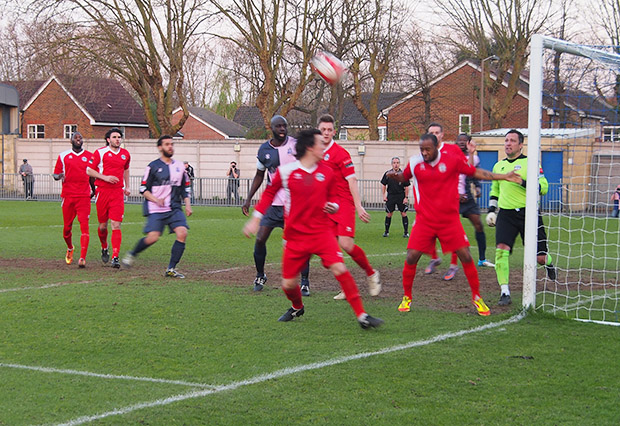 It was a nervy start again from Hamlet, with chances at both ends. 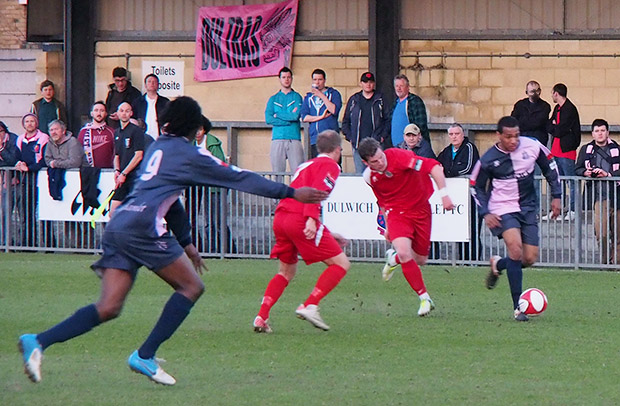 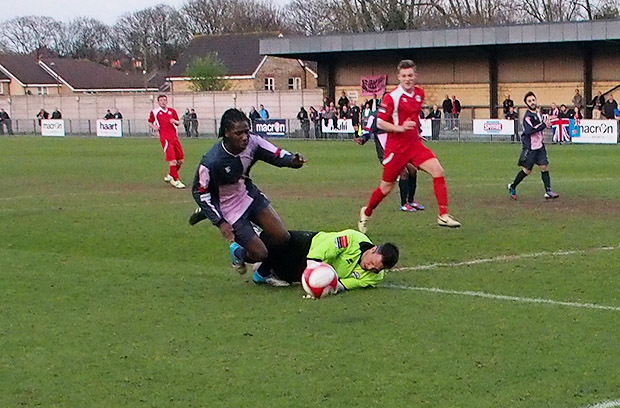 Both goalies put in excellent performances and Dulwich fans were indebted to their star keeper Chico Ramos who made some outstanding stops. 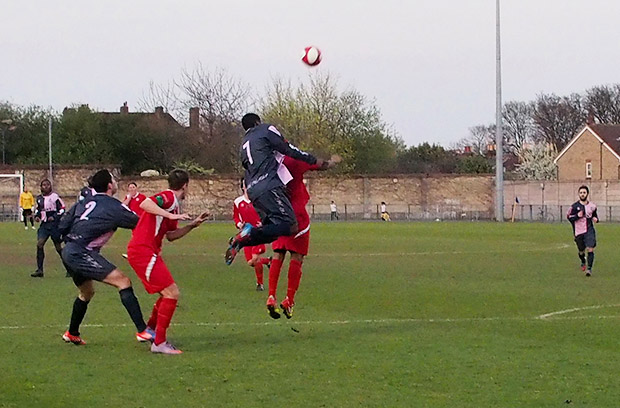 Despite some good attacking at both ends, neither team could make it count. 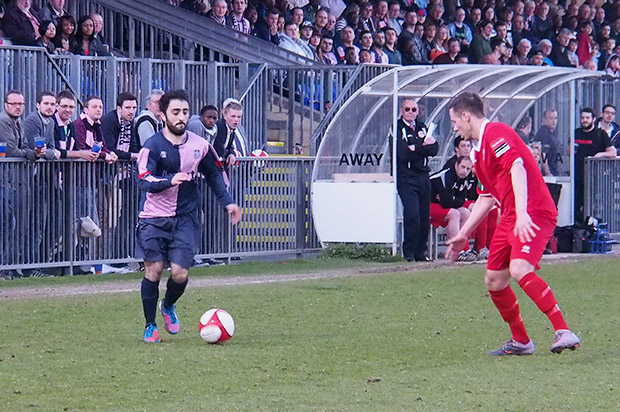 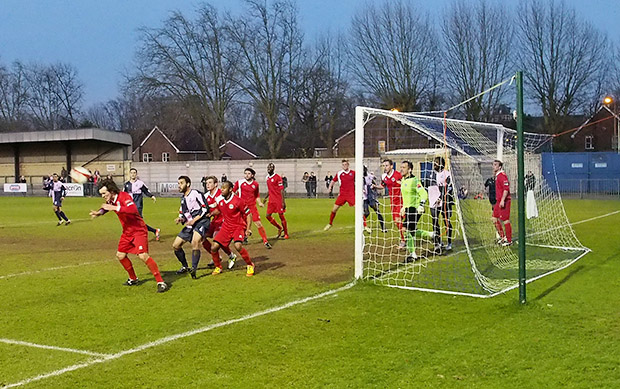 Hamlet grew stronger as the half progressed, but still couldn’t get the breakthrough, and the game stayed at 0-0 at half time. 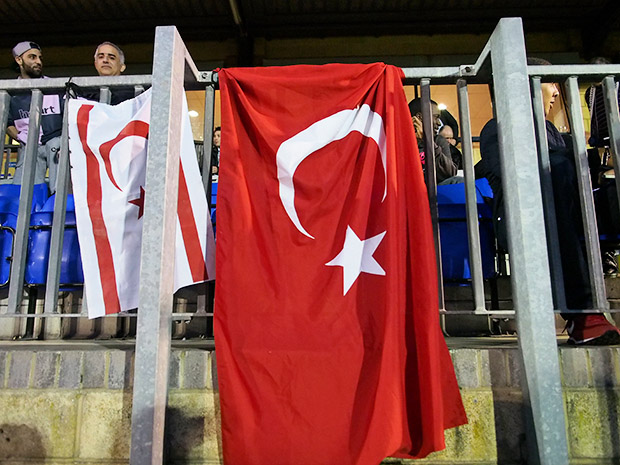 Fans had responded to the club’s message and there was a wide variety of flags draped around the stadium. 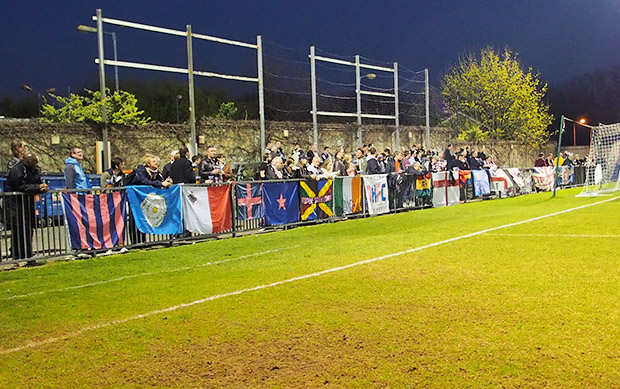 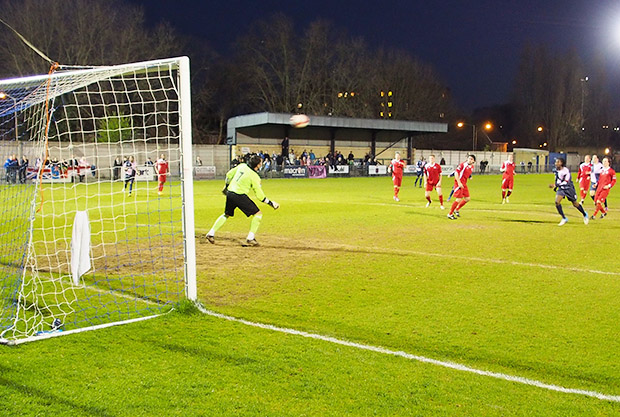 The second half was only four minutes old when Erhun Oztumer thumped in a shot that left Crawley goalie  Frankland stuck to the spot like a statue. 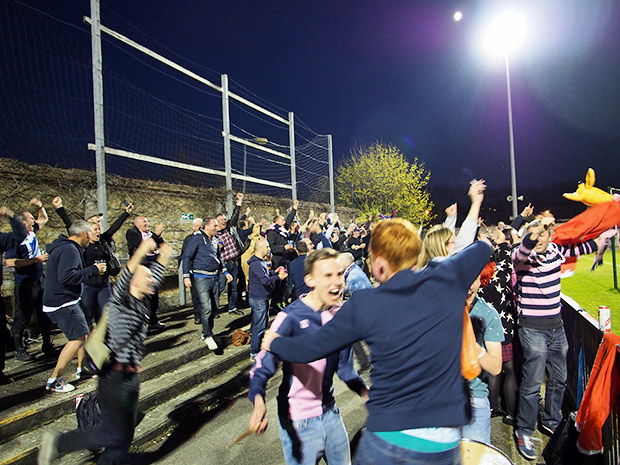 1-0 to the Hamlet and the crowd goes wild! 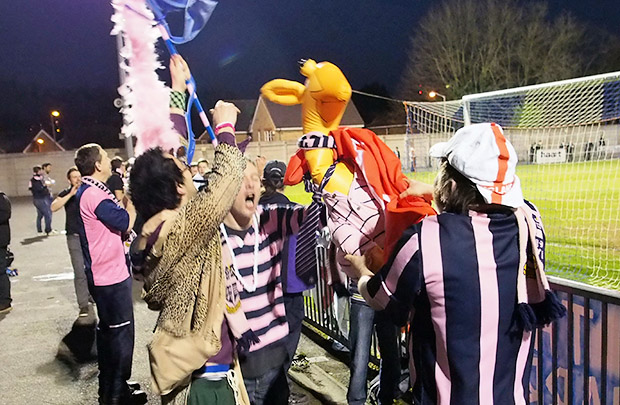 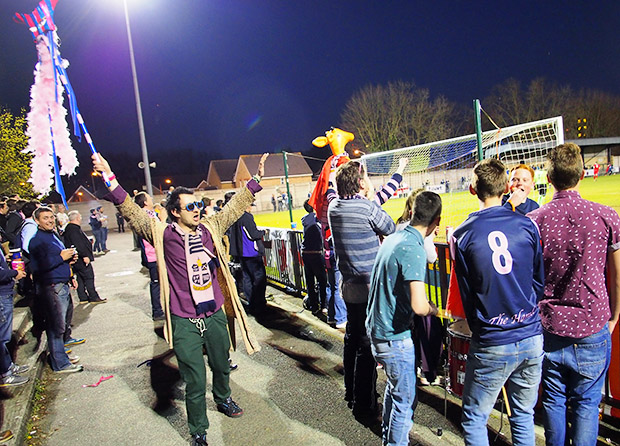 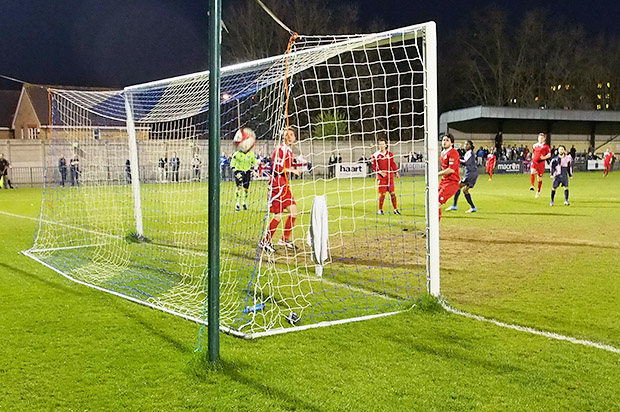 There was more Hamlet joy on the cards as Daniel Carr slammed home the second, just three minutes later. 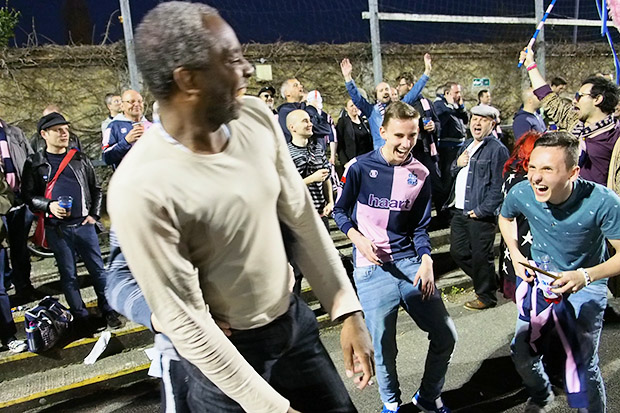 And the crowd goes wild again! 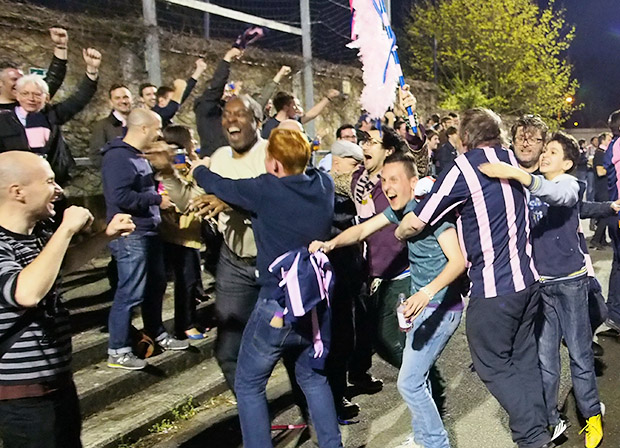 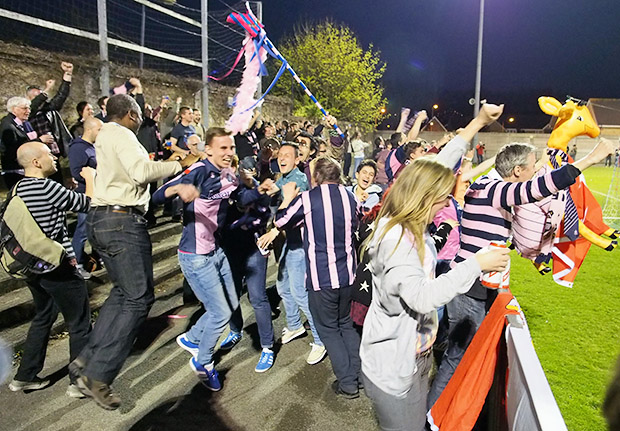 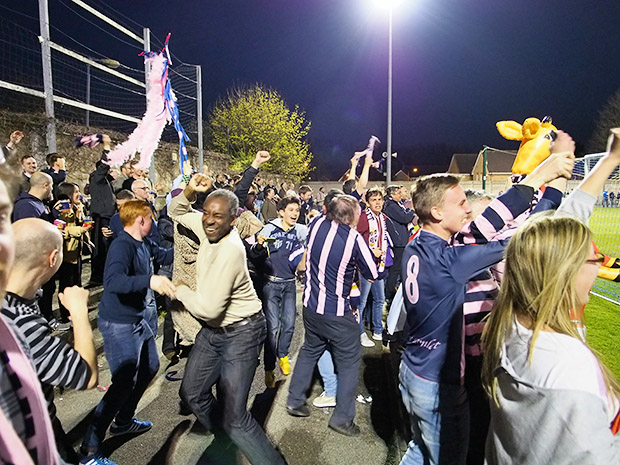 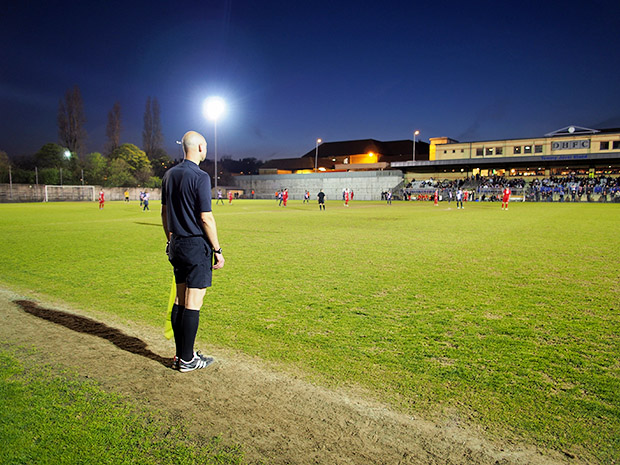 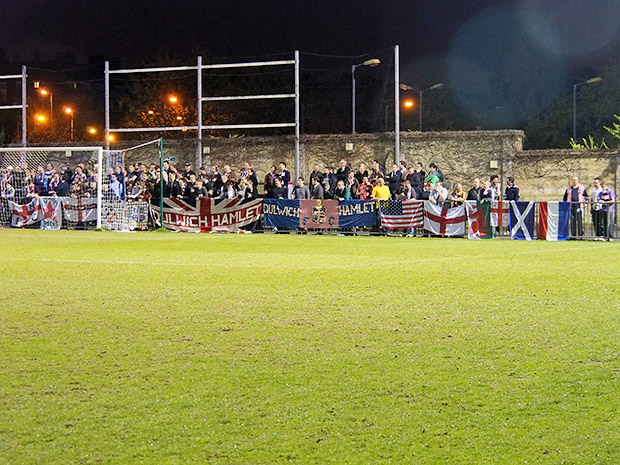 Some of the flags on display. 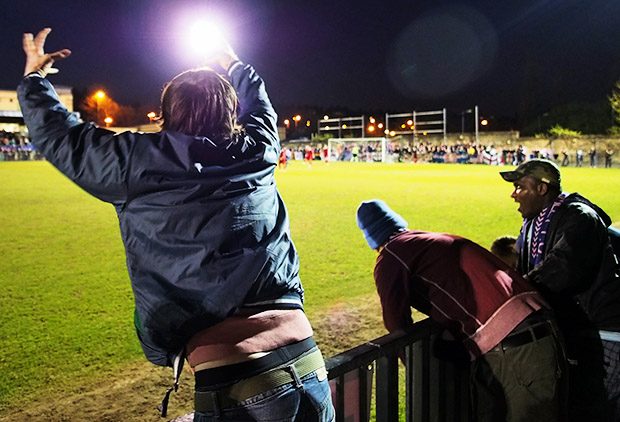 Just after the hour was up, Daniel Carr slotted home to make it 3-0, bringing the dreams of promotion almost unbearably close. 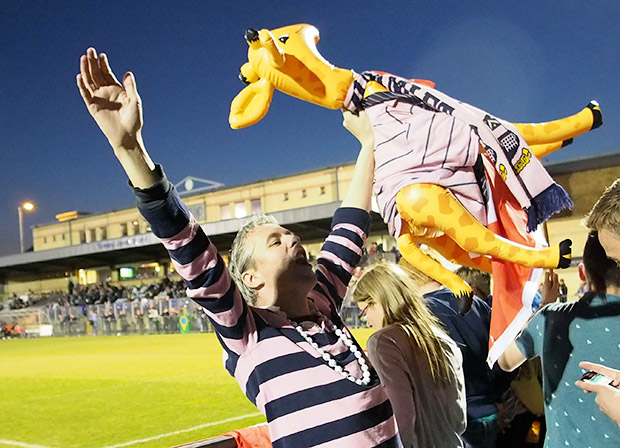 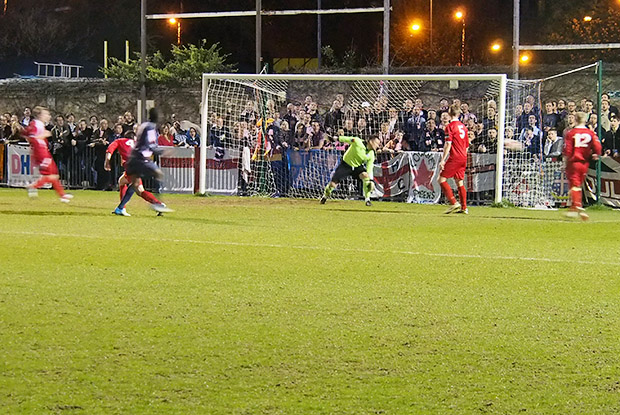 Hamlet kept up the pressure but some sloppy defending at the other end let Crawley snatch a consolation goal to make it 3-1. 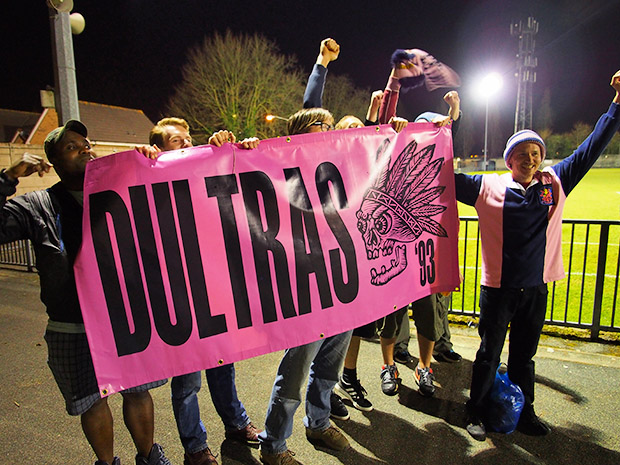 Post match celebrations – and what a banner that is! 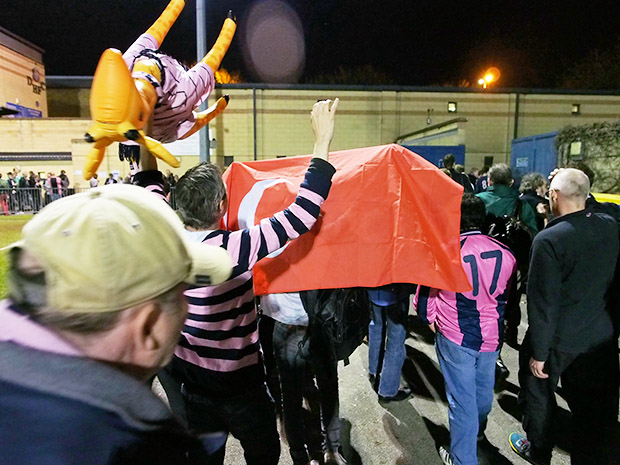 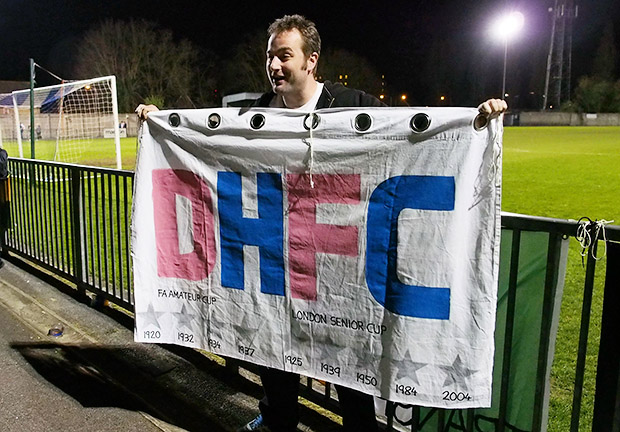 The last game of the season is this Saturday 27th April – assuming that Maidstone win their last game, Hamlet only have to draw or win and the title is theirs!