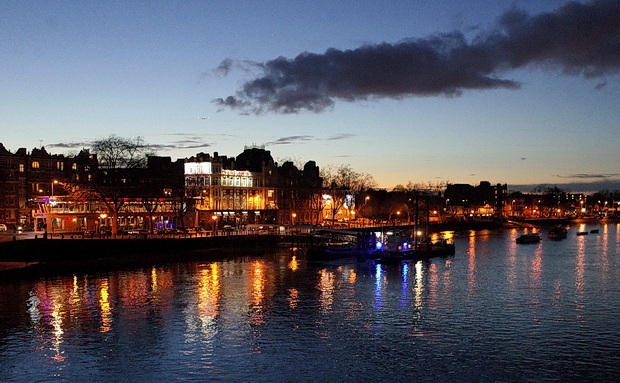 Here’s a selection of night-time views of Putney in south London, taken on a chilly Friday night at the end of January. 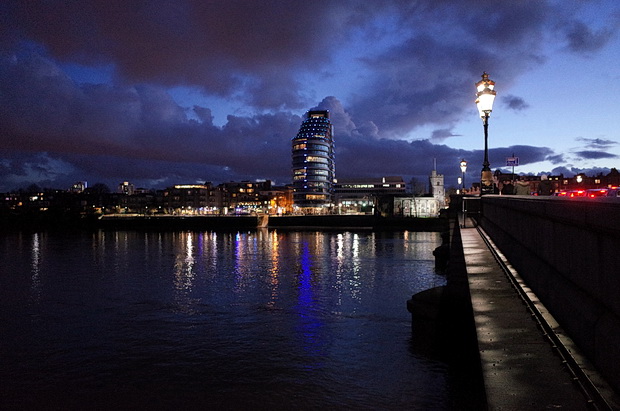 Wikipedia tells how Putney was once linked to Brixton and part of Surrey:

Putney is an ancient parish which covered 9.11 square kilometres (3.52 sq mi) and was until 1889 in the Hundred of Brixton in the county of Surrey. Its area has been reduced by the loss of Roehampton to the south-west, an offshoot hamlet that conserved more of its own clustered historic core.

In 1855 the parish was included in the area of responsibility of the Metropolitan Board of Works and was grouped into the Wandsworth District. In 1889 the area was removed from Surrey and became part of the County of London. 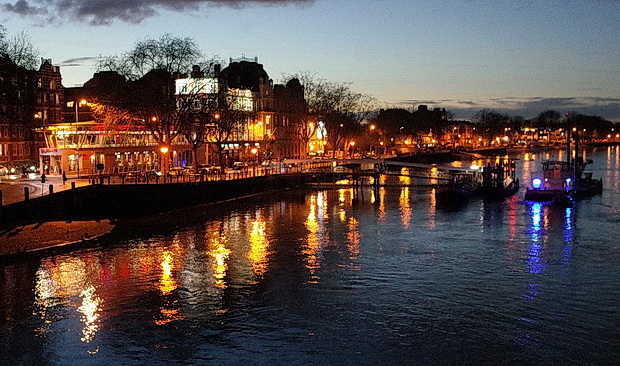 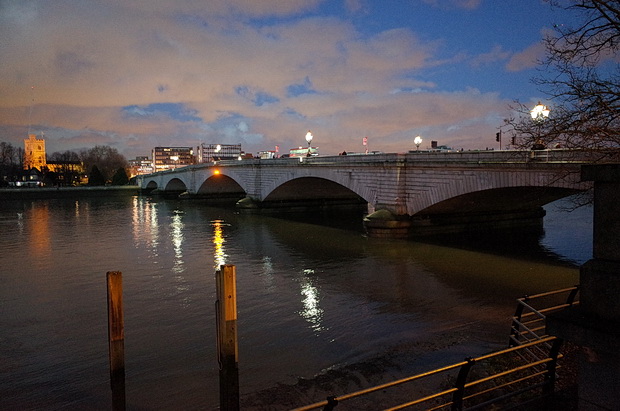 Designed by civil engineer Sir Joseph Bazalgette as a five-span structure, Putney Bridge is built of stone and Cornish granite and was constructed by John Waddell of Edinburgh, whose tender of £240,433 (equivalent to £21,839,173 in 2015) was accepted on 15 April 1882. 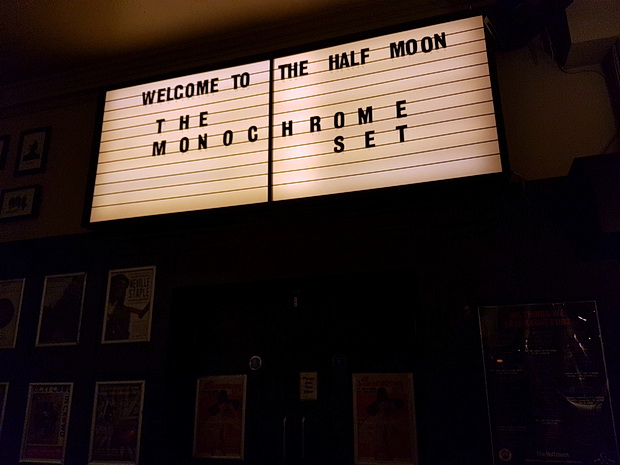 I was in Putney to play a gig with the Monochrome Set at the Half Moon on Lower Richmond Road.

One of London’s longest running, and most respected live music venues, the Half Moon has hosted some of the biggest names in popular music since the early 1960s, so I found myself on the very stage that witnessed Kate Bush’s first ever public performance.

Putting on live music every night since 1963, the small stage has also groaned under the weight of mahoosive acts such The Rolling Stones, The Who, U2, Ralph McTell, John Martyn, Bert Jansch, Roy Harper, Fairport Convention, Van Morrison, Dr. Feelgood, Elvis Costello and Nick Cave. 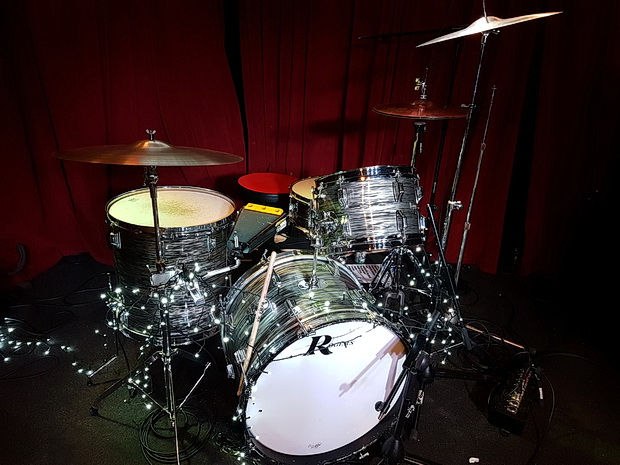 I was playing on this lovely vintage retro Rogers drum kit, courtesy of the support band’s stand-in drummer. Thanks again! 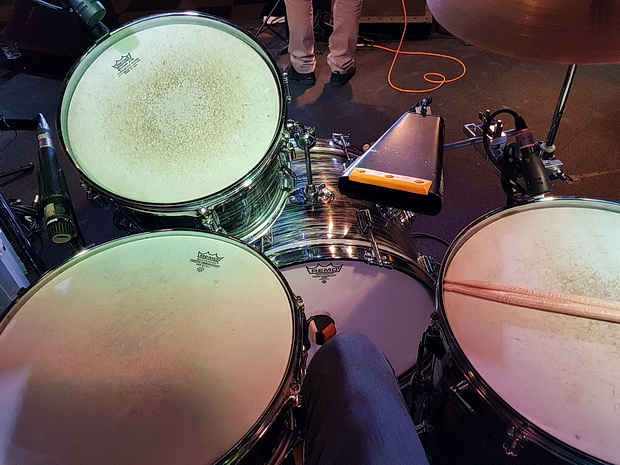 As always, I brought along my Ridge Rider cowbell and fairy lights to supplement the kit. There’s never enough cowbell in my world. Or fairy lights, for that matter. 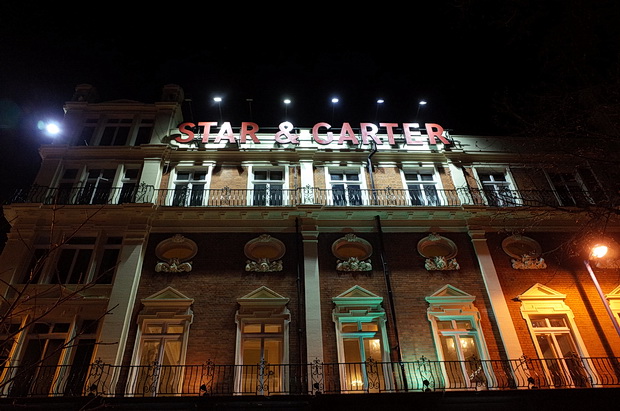 After the soundcheck, I took a stroll around Putney, passing the large facade of the river-facing Star & Garter pub. 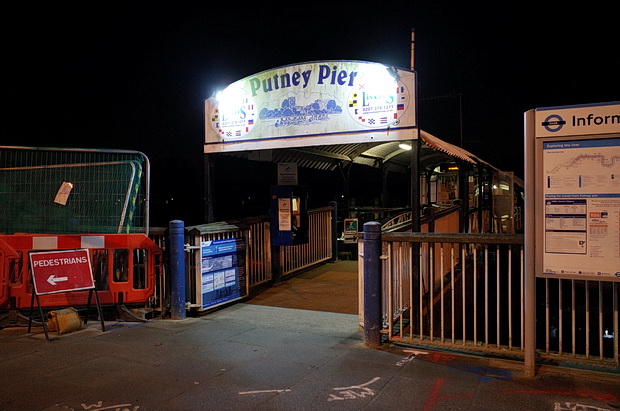 Located on Putney Embankment just to the west of Putney Bridge, Putney Pier services by Livett’s Launches and Thames Clippers. 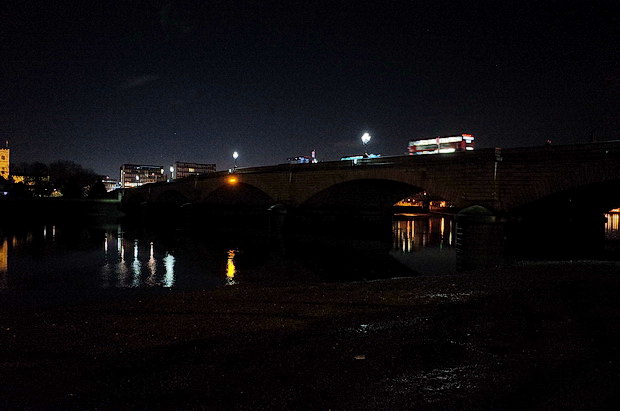 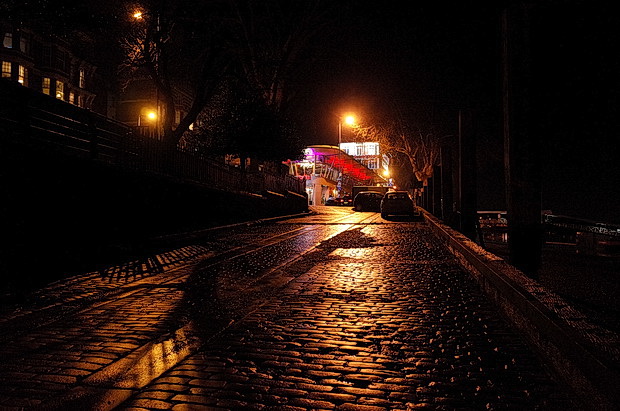 Alas, the Facebook group that documented the plight of these cars is no more, but you can see plenty of waterlogged and river-bound cars on the Twitter feed.

God Bless You, May God Bless These Great Tides Of Putney. pic.twitter.com/UR4x7jgo89 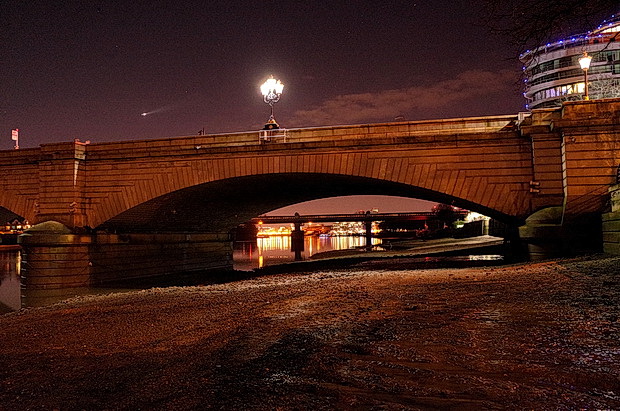 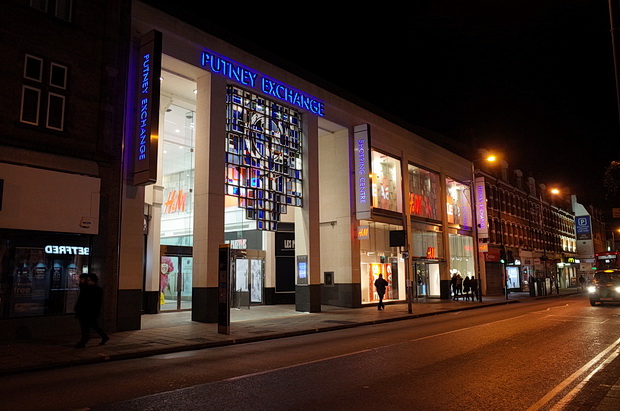 Putney High Street on a Saturday night is a pretty soulless affair. 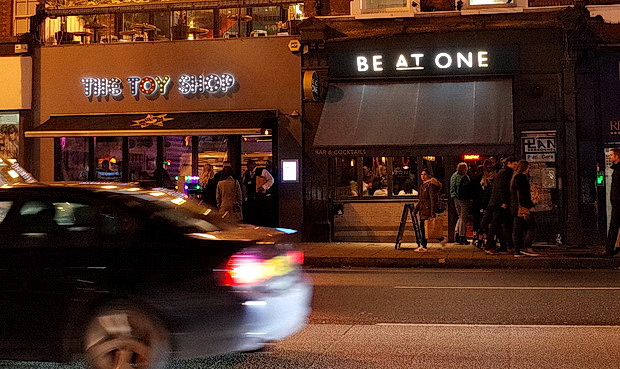 I passed these venues and saw burly bouncers eagerly examining the contents of people’s bags before they were allowed in. Definitely not my kind of place, then.

The Toy Shop has a cocktail menu that sounds like it was designed for 5 year olds (“Moopy’s Milk Bottle, Revenge of The Gingerbread Man, Swizzle Diddle, Jim Jam Very Berry Bash”) but the prices are very grown up, starting at £8.50.

Next door is a branch of the Be At One cocktail chain, where prices are even more expensive. 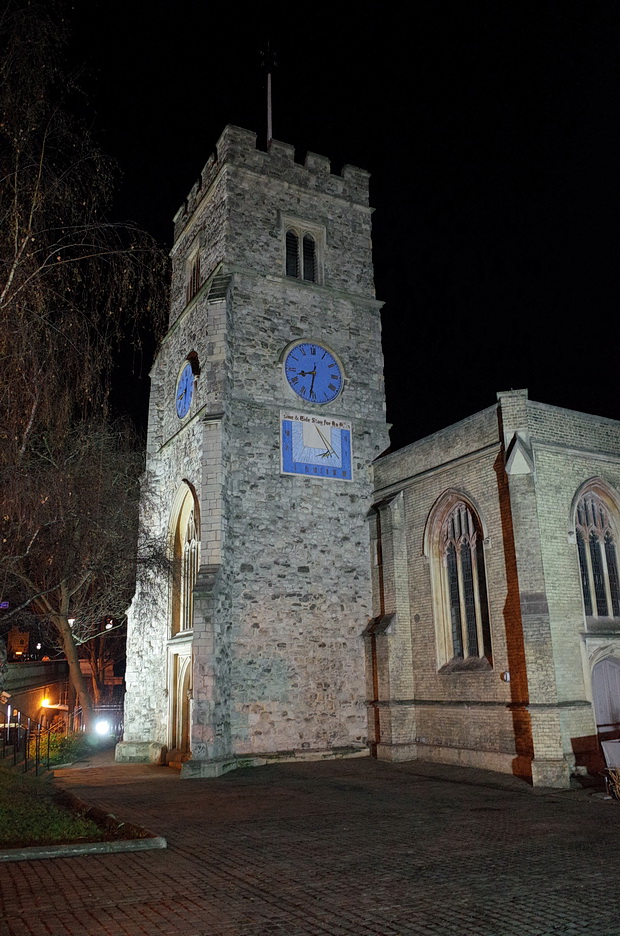 Sited next to the River Thames, beside the southern approach to Putney Bridge, St Mary’s Church dates back to the 13th century.

The current, Grade II listed building, has parts dating back to medieval times. 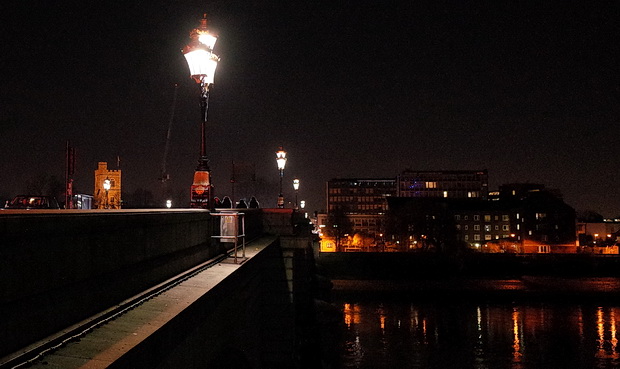 To the left can be seen the tower of All Saints Church, Fulham. There has been a church on the same site for more than 900 years. 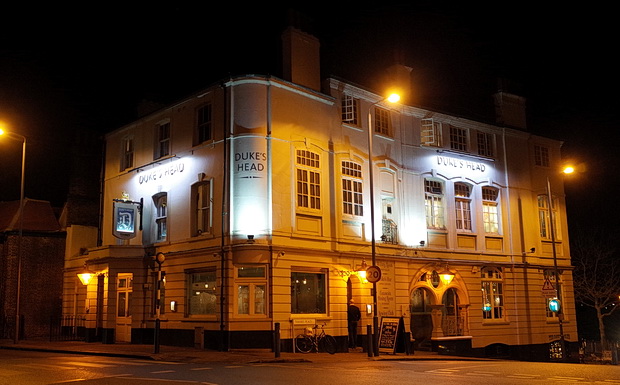 The Duke’s Head is a large Victorian grade II listed pub that has overlooked the River Thames in Putney for nearly 150 years, and is sited at the start of the annual Oxford and Cambridge University Boat Race. 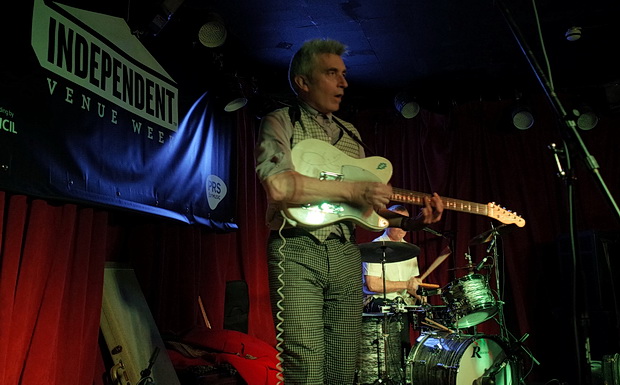 We were supported by the excellent Fallen Leaves. 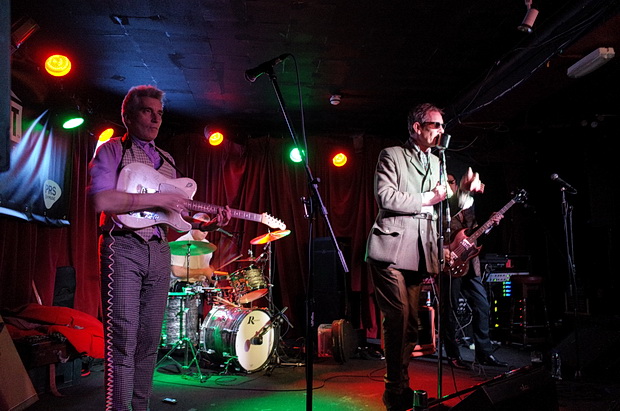 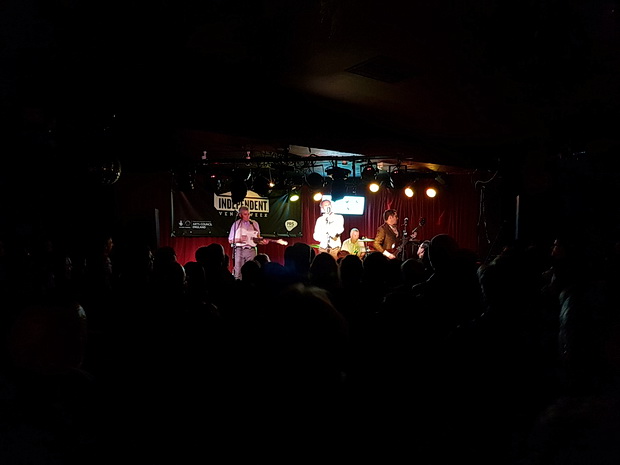 The crowd was a sell out. 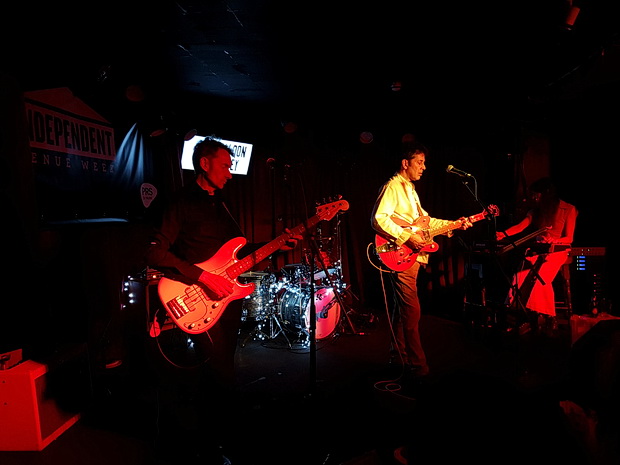 I managed to grab this shot during the one song that doesn’t feature drums, giving me time to dash back stage for more beers, chat to a few friends in the crowd and heckle the band 🙂

A night at the Half Moon, Herne Hill, south London