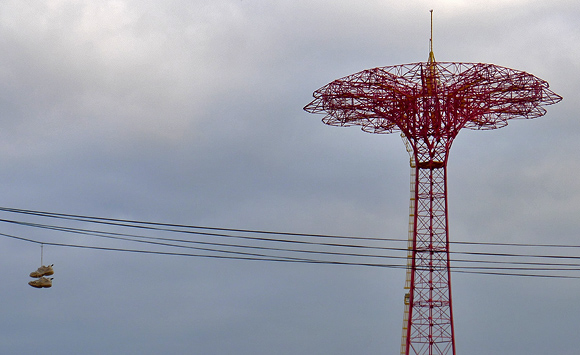 Standing 262 feet (80 m) tall and weighing 170 tons, the amusement ride was once known as the ‘Eiffel Tower of Brooklyn,’ and was built for the 1939 New York World’s Fair in Flushing Meadows Park, Queens. It was moved to its current location in Coney Island (then known as Steeplechase Park amusement park) in 1941. 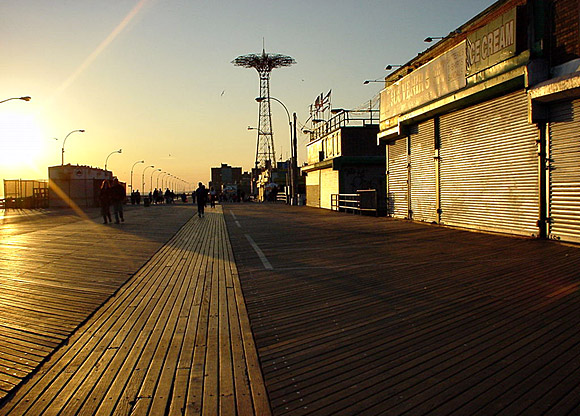 Based on an army parachute training  tower, this health and safety-troubling ride featured twelve cantilevered steel arms, each one supporting a two-person parachute which was hoisted to the top of the tower and released to float back to earth. With a bump. 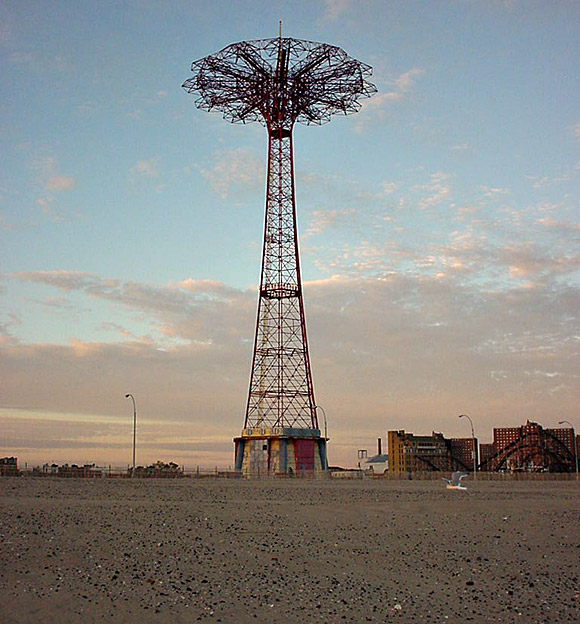 The ride finally ceased operations in 1968, with the New York City Parks Department putting it up for sale in 1971, but there were no takers.

The tower deteriorated  so badly in the following years that one reporter was compelled to note, “it is scarier now to stand under it than it ever was to ride it.”

Dodging various threats of demolition, the Parachute Jump was declared a city landmark for a second time in 1988, and in 1992, the structure was made safe and repainted in its original colours [source].

Check out the video from the 1939-1940 New York World’s Fair to see what a precarious ride it was.

This 67 year old color film was taken by my father (copyright) at the 1939-1940 New York World’s Fair. A short clip from this movie includes the infamous Parachute Ride in the Amusement Zone at the World’s Fair. Riders paid about $.40 a ticket to be hoisted up by a cable system in essentially a park bench affair, with just a few straps, up 25 stories until the chute reached the top of the steel structure. Cables released the chute, a free fall occurred unitl the chute opened in the floating descent to the base

I’ll be posting up a big Coney Island photo feature soon, so check back soon, or subscribe to my Twitter feed for updates!