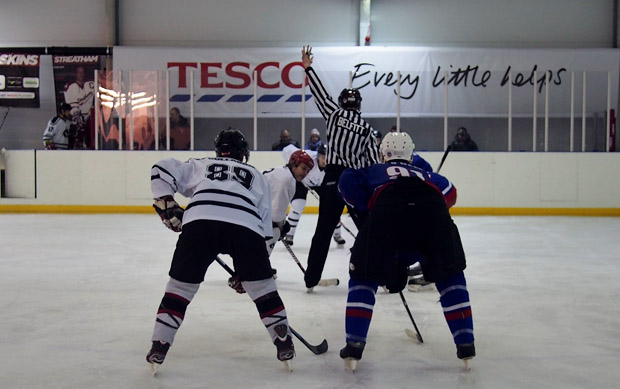 I’ve never been to an ice hockey game, so when I heard that a friend was playing a match at the Brixton Ice Rink on Friday night, it seemed too good an opportunity to miss. 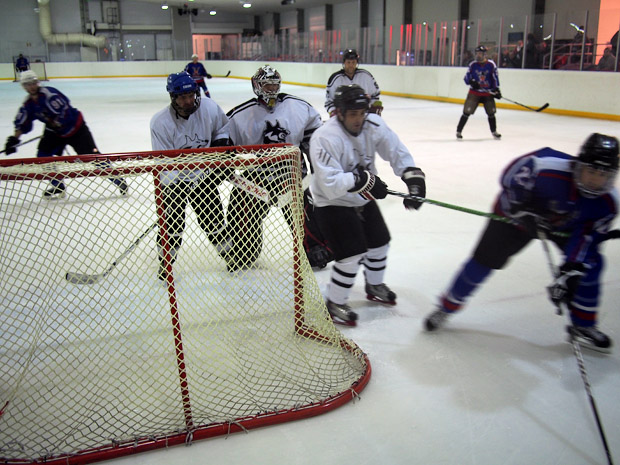 Suitably refreshed by a pre-match drink in the Albert, a gang of us went down the rink to cheer on the Streatham Wolves who were playing the Statesmen. The game started late at 10pm.

It was free to get in and we joined a rather intimate crowd in the chilly stadium. This was the first time I’d visited Brixton’s rink and I was rather impressed with the place (apart from the huge Tesco banner hanging along one side). 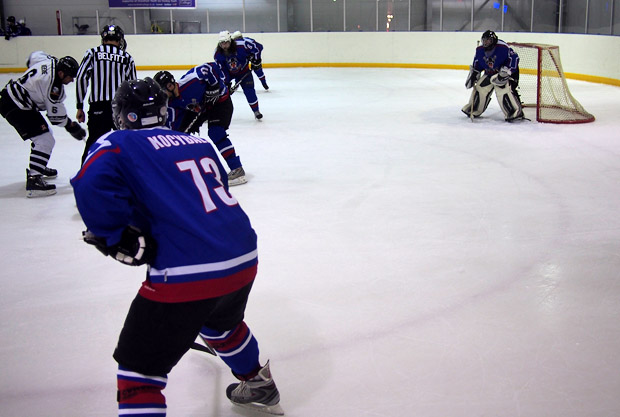 My mate was playing for the Streatham Night Wolves, so this would have counted as a home game.

Presumably to take make the most of the home disadvantage,  a rather mutant sounding wolf howl would occasionally trickle though the PA. I don’t think it scared the opposition much. 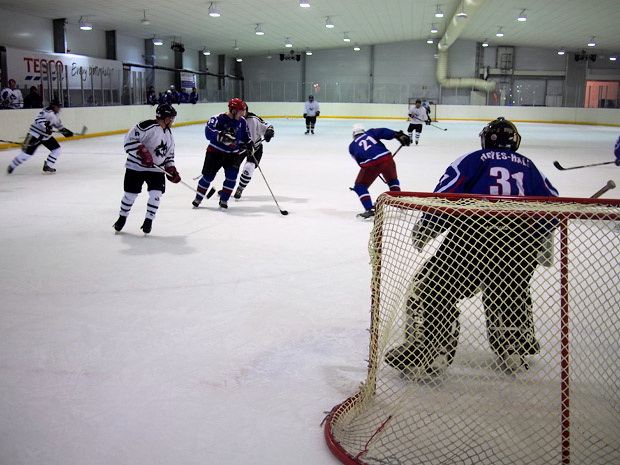 I know next to nothing about the sport so it was interesting to see how it all works.  My first thoughts was that it’s fast, furious and rather exciting. I like it!

What I didn’t like so much was the super-cheesy blasts of music that accompanied certain events during the game. Comically, song snippets ended as abruptly as they started with no fade outs, so it sounded like the ‘DJ’ was playing the music on an old cassette deck. 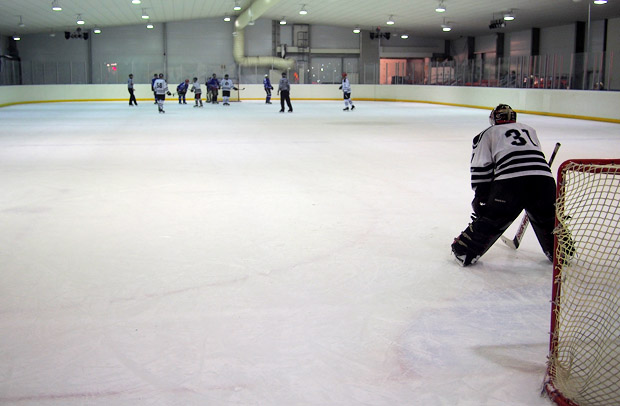 It took us a while to find our friend as the players have so much padding and protection on that it’s hard to make out who’s who.

It’s made more difficult by the fact that the players are always swapping over, with gangs of up to five players from each team suddenly charging off the rink to curt blasts of music. 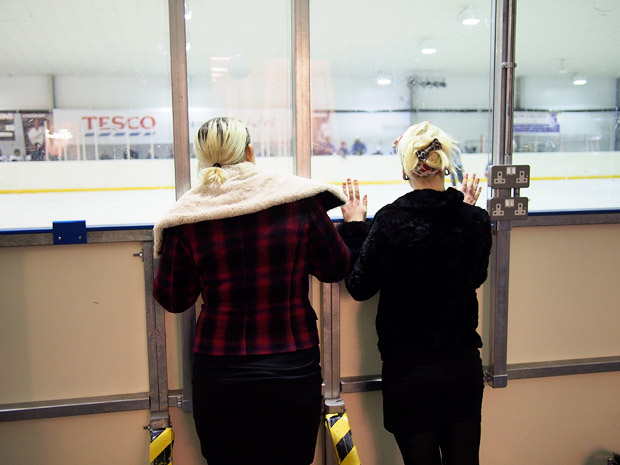 Inside the rink, there’s a small amount of raised seating around the rink providing good views, with a transparent plastic wall protecting spectators from an airborne puck.

You can also stand and watch the action, although it’s a bit disconcerting when a puck slams into the wall right next to you with an almighty thud. 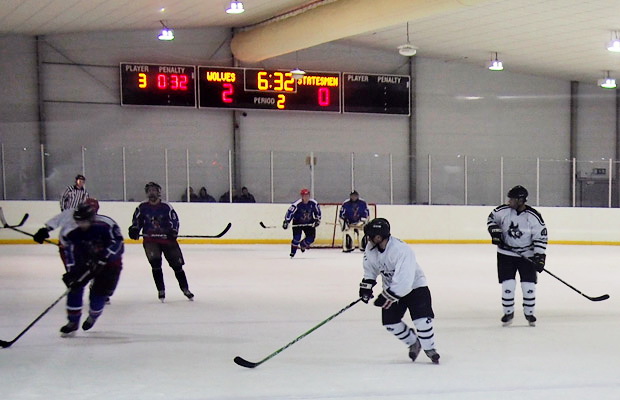 The game was fast –  really fast – and in the first period, all the action was coming from the Wolves who seemed to be cruising. Go Wolves!

They went one up in the first period and when they scored again in the second period, it looked like the game was in the bag. 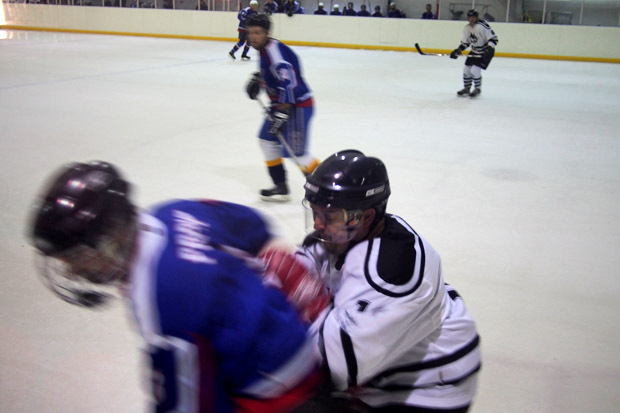 I have to be honest: there wasn’t any where near as much argy bargy as I was hoping for, but here’s a little scuffle-ette – and there’s another one below. 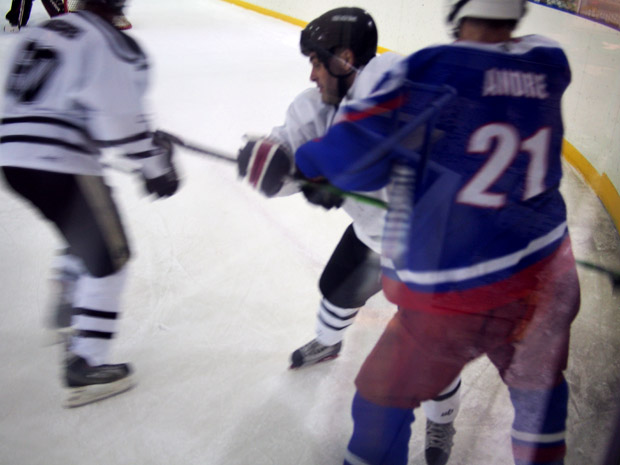 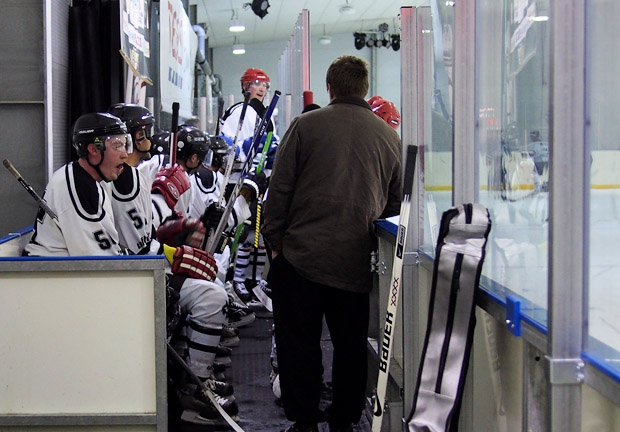 The subs (or whatever they’re called) lined up ready to take their turn. As far as I could work out, very few players take part in the entire game. 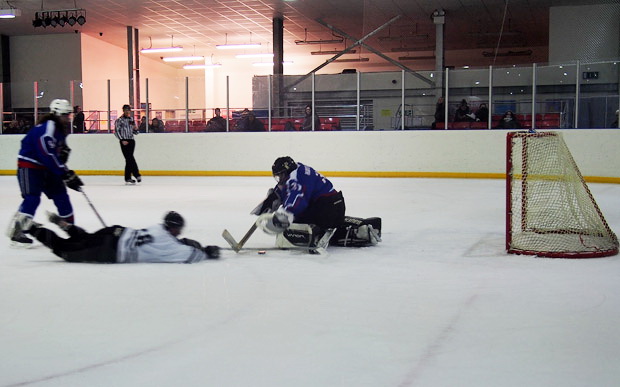 In the third period, the Statesmen were a changed team, and took control of the match and swiftly pulled a goal back.

With minutes on the clock, the Wolves were desperately hanging on to their lead as the Statesmen piled on the pressure. This was tense stuff! 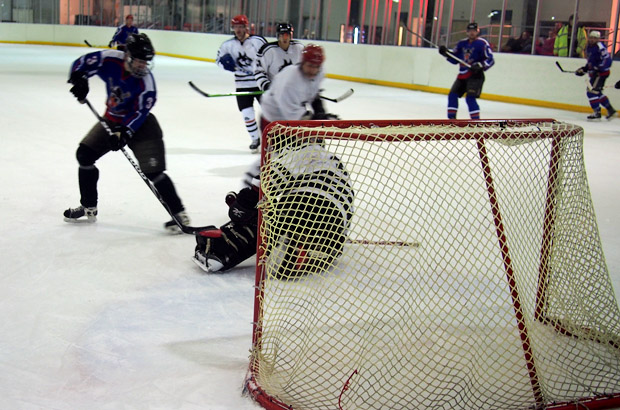 A fierce attack is launched in the dying minutes and the Statesmen slam home the equaliser after a goal mouth scramble. Boo! 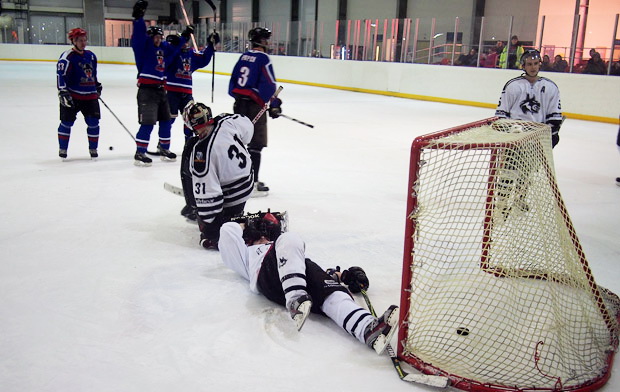 The Statesman cheer while the Wolves look deeply unchuffed. 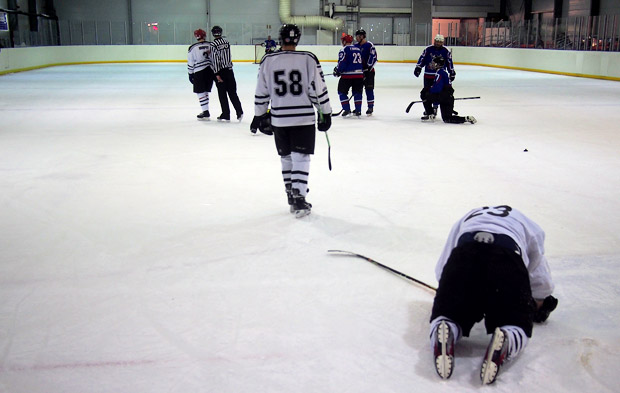 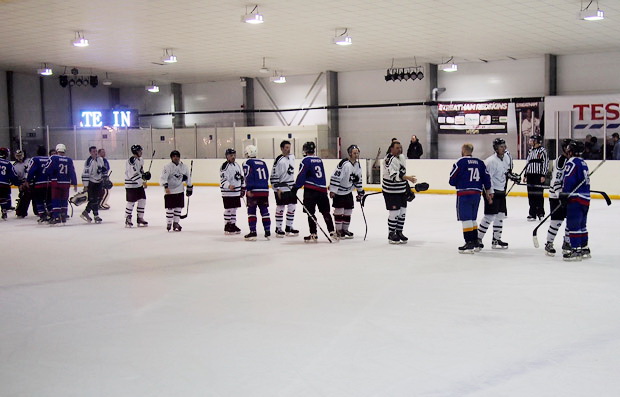 The game ended 2-2.  I really enjoyed watching the match and reckon I’ll be along for another one soon.

A little bit of background to Brixton Ice Rink. It opened almost exactly a year ago, and was built on the site of a multi-story car park – a move that stirred up considerable controversy among local traders and businesses at the time.

The rink is only a temporary fixture in Brixton, and is set to move back to Streatham through a much-criticised deal with Tesco. Read the full story on the urban75 bulletin boards.

Streatham struggles to keep its leisure and entertainment venues