Fifteen years ago, you could barely walk around the centre of London without banging into some poor soul hanging on to an oversized placard advertising a computer fair, golf sale, ticket sale or perpetual ‘closing down sale.’ 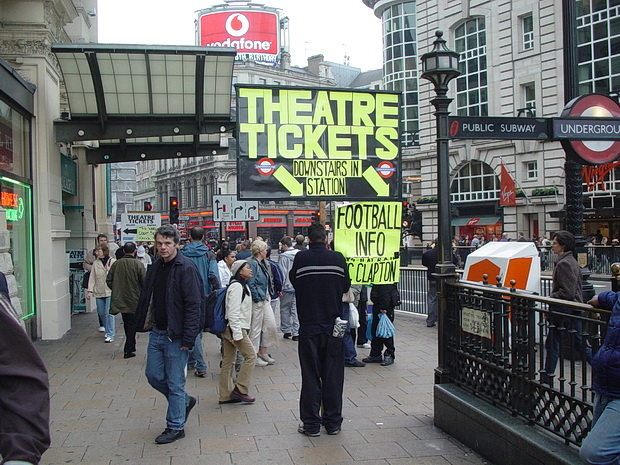 As time went by, the human billboards multiplied in number with some placards taking on immense, pavement blocking proportions.

Eventually, Westminster council had enough, and in August 2008 a ban on ‘portable signs’ was implemented in the West End:

From next month anyone found using a board to advertise their wares or religious message will face fines of up to £2,500.

Daniel Astaire, a Westminster councillor, said that “cheap and ugly” signs were blighting areas such as Oxford Street and Covent Garden.

“This is a world-class city, not a junk yard,” he said.

“No one wants to fight their way past neon-coloured makeshift signs.”

The change is part of a £10 million plan, spearheaded by New West End Company, a retailer association, to improve the ambience of the shopping district. [—] 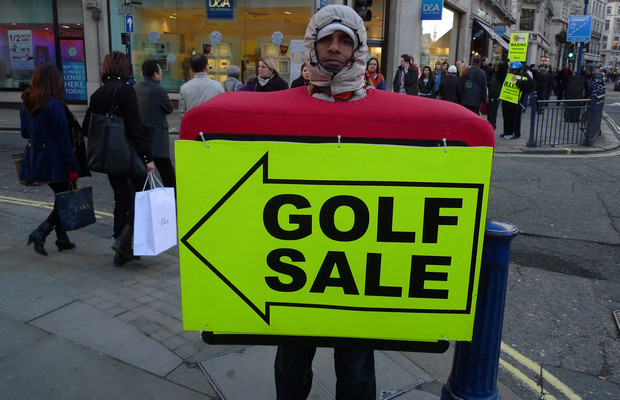 Advertisers were, however, quick to adapt and curious and innovative outfits like this were seen around the West End two years later.

Human billboards of the past 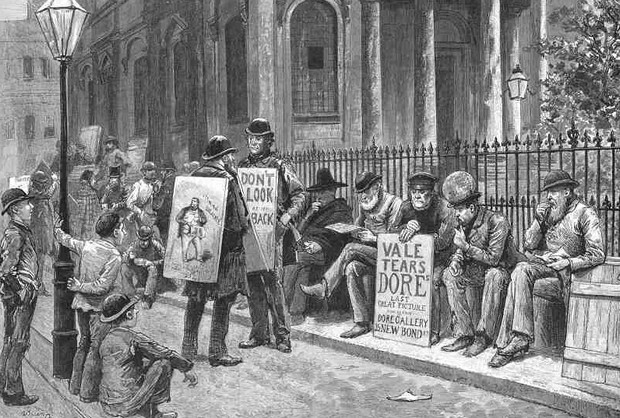 I documented the rise and fall of ‘sandwich men’ in an earlier article on urban75:

Much like today, London was plastered with advertising, with armies of chalkers and ‘external paper hangers’ decorating blank walls, empty shops and wooden hoardings with advertisements.

The combined inconveniences of an advertising tax and increased competition for poster space led advertisers to a simple conclusion – make the messages become mobile!

Described by the writer William Weir as ‘peripatetic placards’, Prince Pückler-Muskae gives an interesting account of how the technique was employed in the 1820s:

“Formerly people were content to paste them up; now they are ambulant. One man had a pasteboard hat, three times as high as other hats, on which is written in great letters, ‘Boots at twelve shillings a pair – warranted’.

Another carried a sort of banner on which is represented a washerwoman and the inscription, ‘Only three-pence a shirt’.” 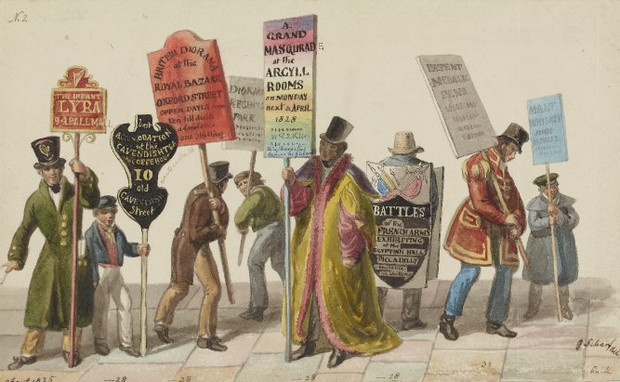 Men and boys with advertising boards; standing on footpath, with boards including advertisements for Patent medallic pens and a masquerade at the Argyll Rooms. c.1825 Watercolour by George Scharf  [—]

Charles Dickens described these advertisers as “a piece of human flesh between two slices of paste board.”

It was claimed in The Times in mid-1823 that such human billboards were a London invention – while a familiar sight in London, the “biped advertisement” was new in Paris at that time. [—] 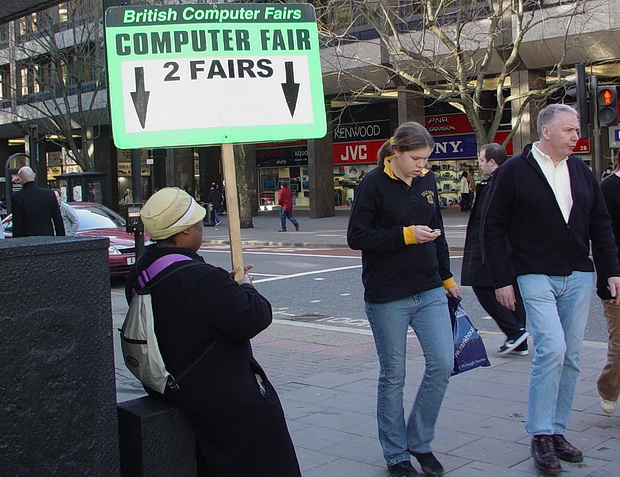 The big hotspots for human billboards in 2004 were Piccadilly Circus, Leicester Square, Oxford Street and Tottenham Court Road, which was then the place to go for consumer electronics and the ubiquitous ‘computer fairs.’ 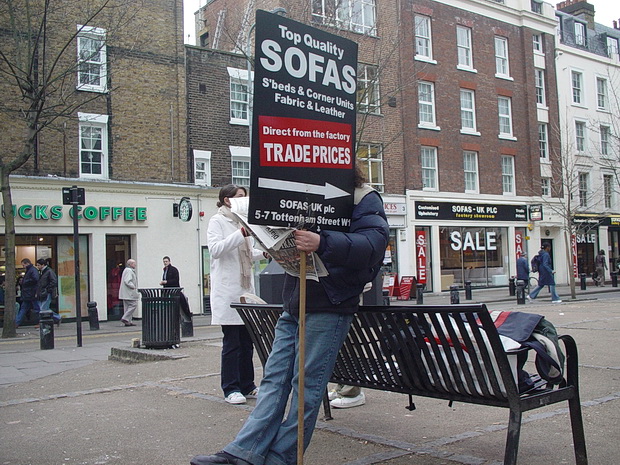 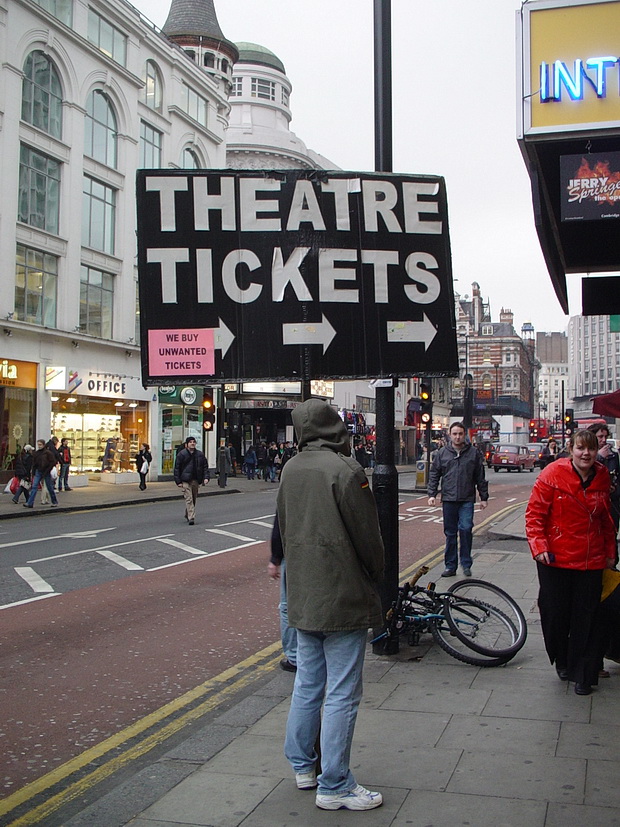 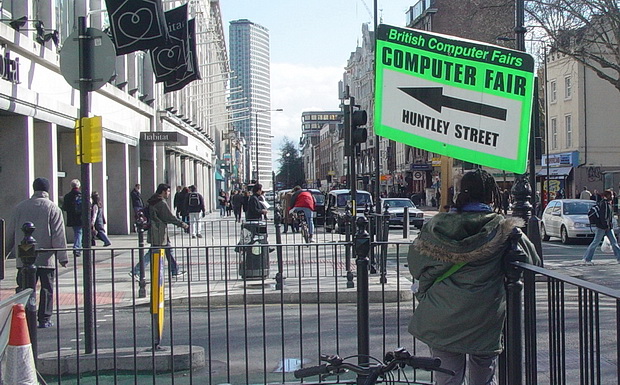 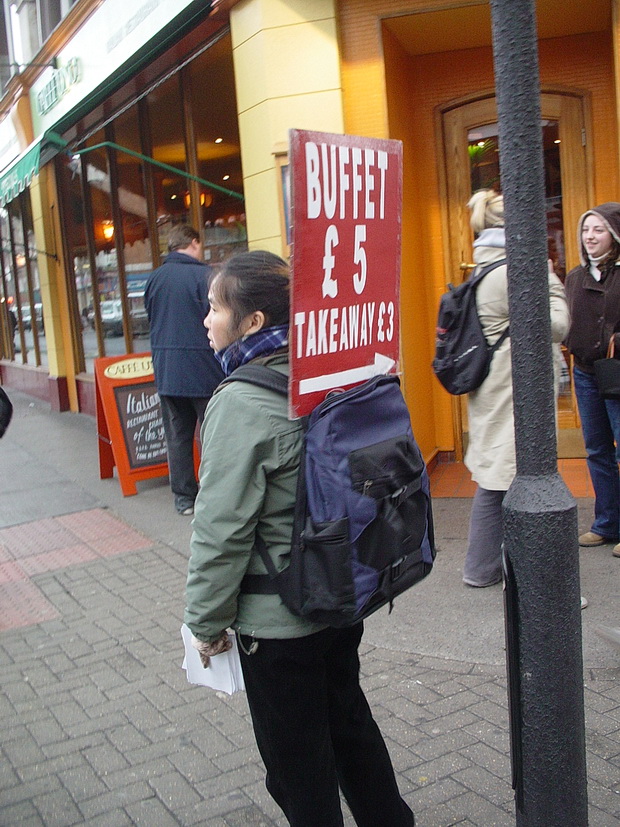 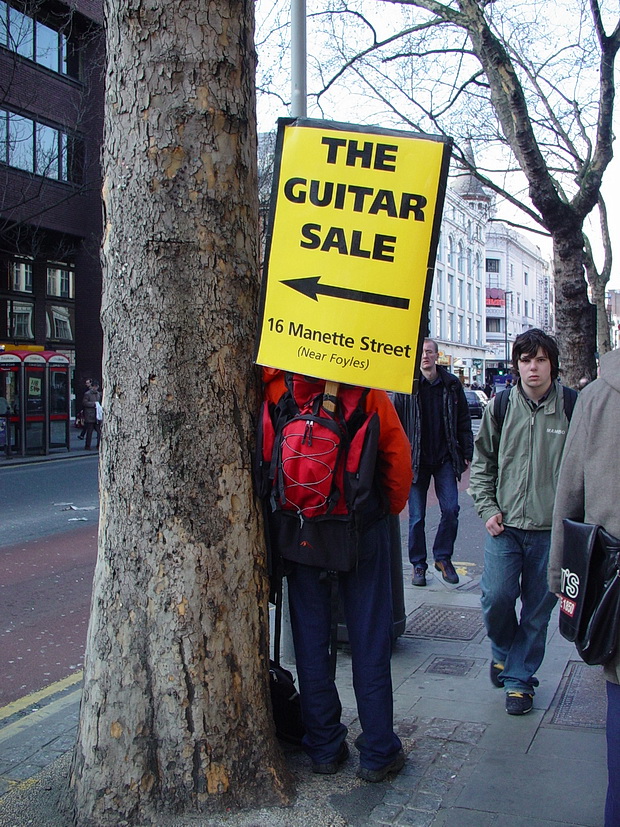 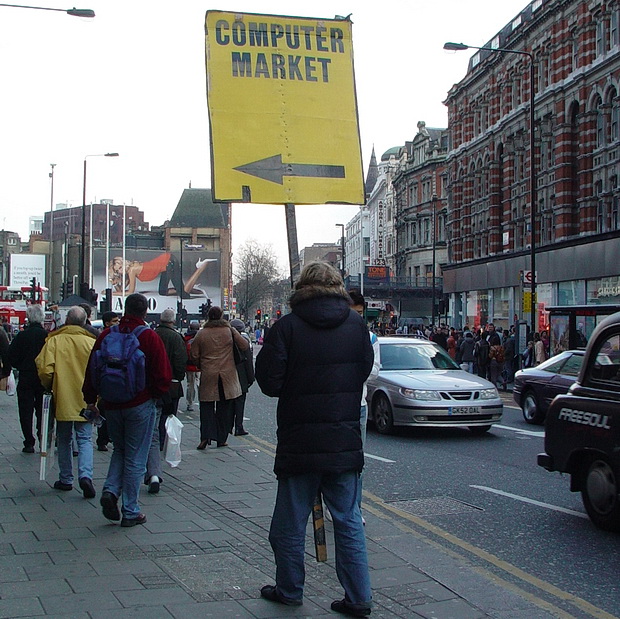 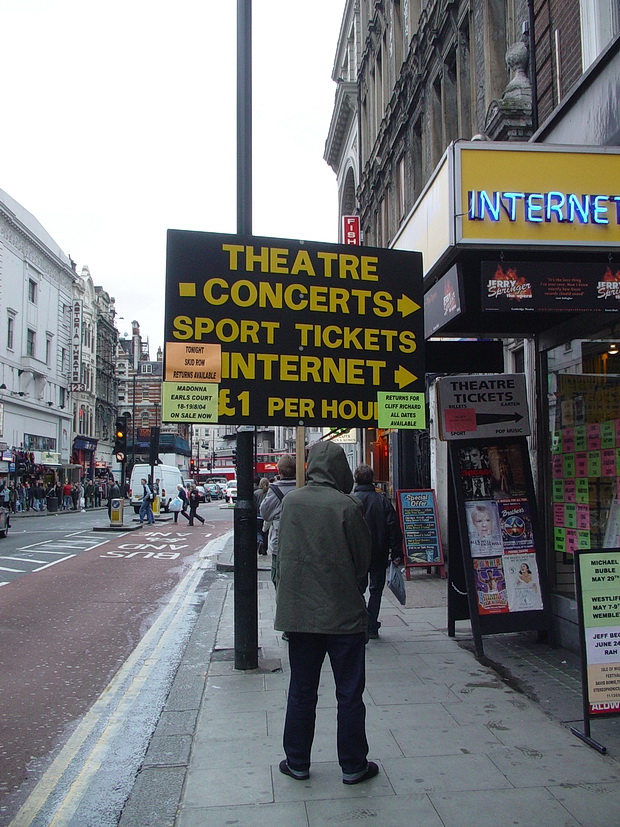 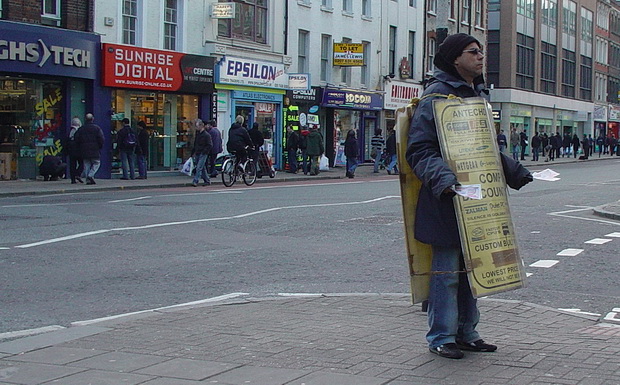 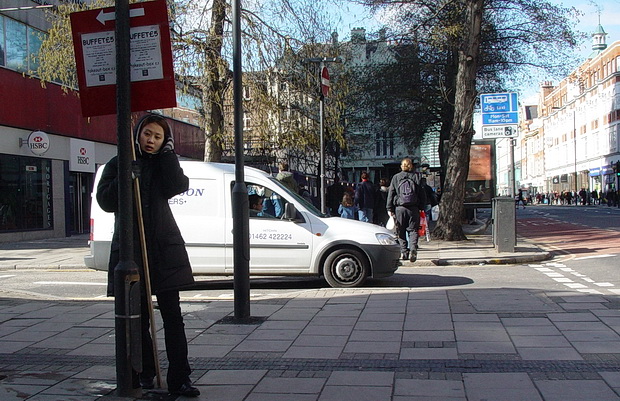 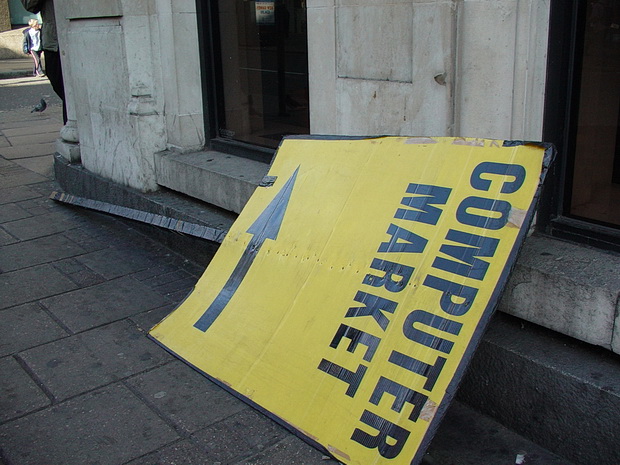 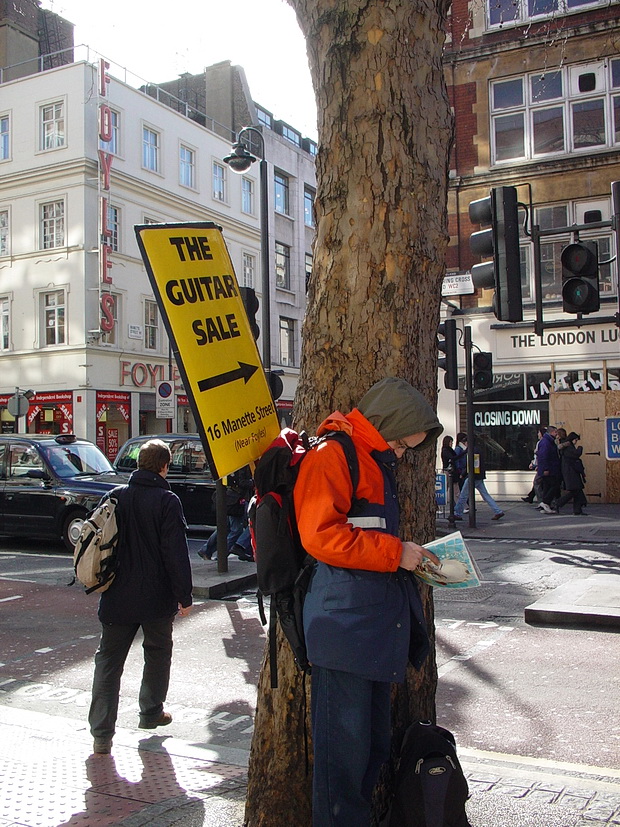 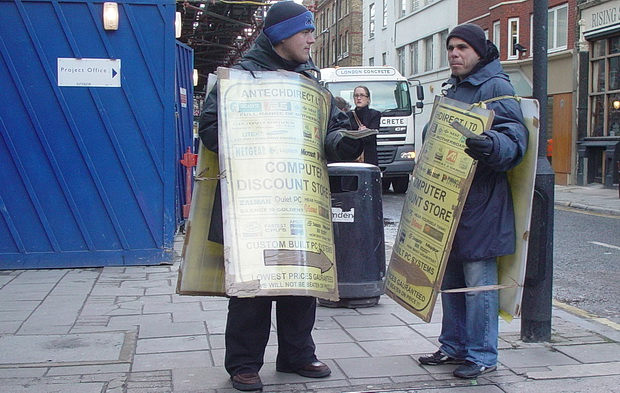 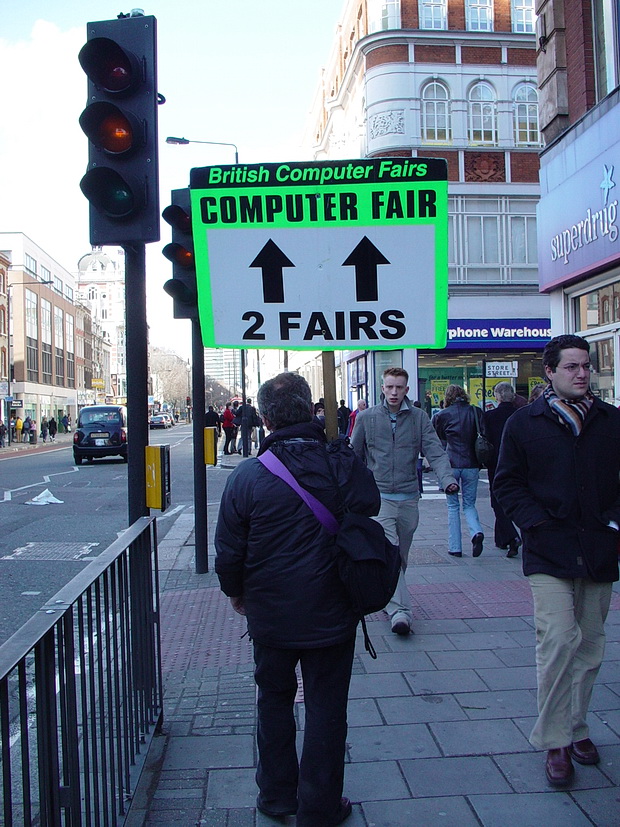 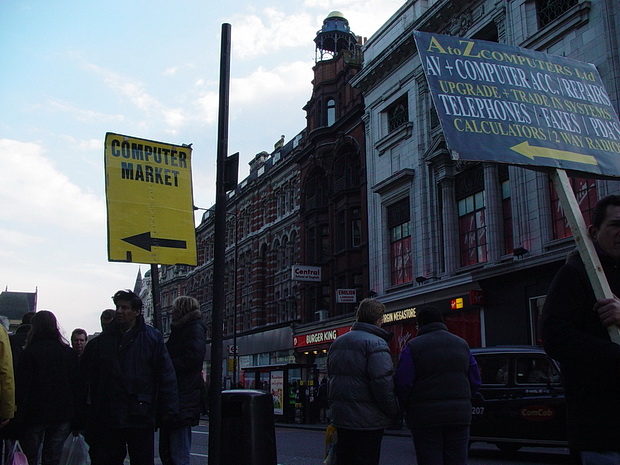 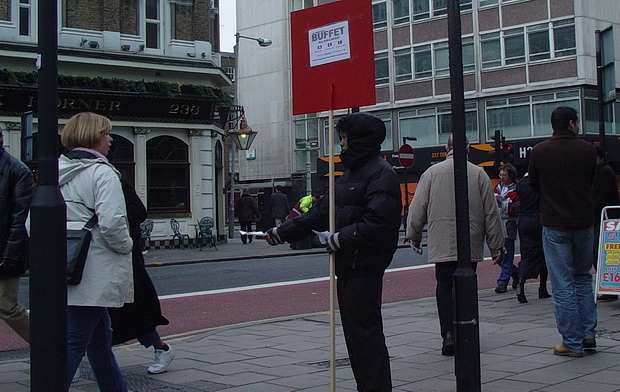 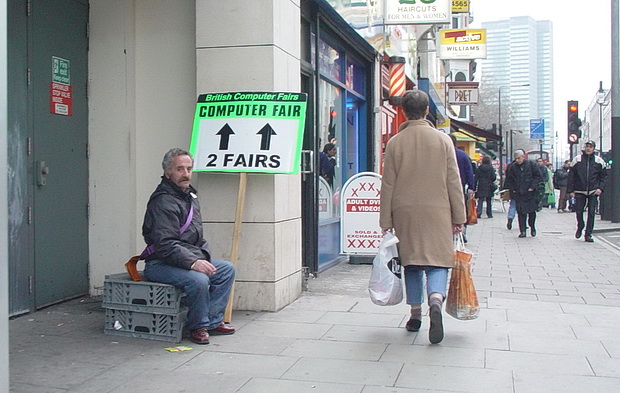 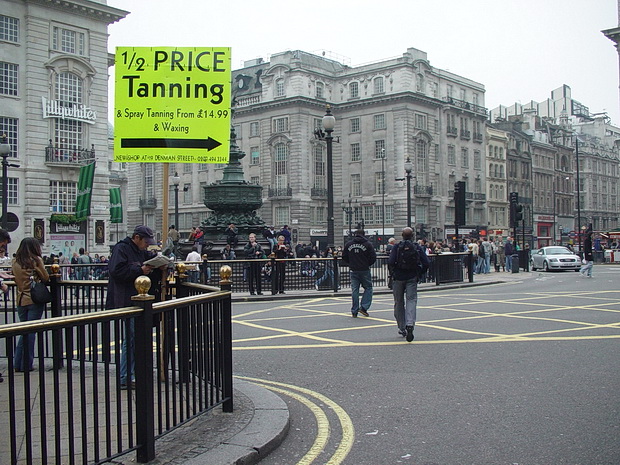 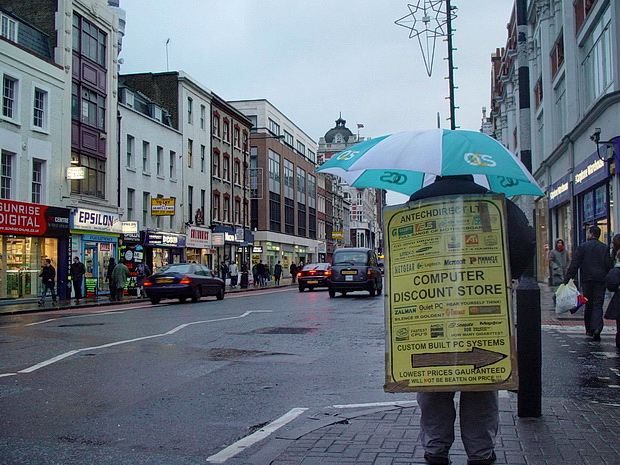 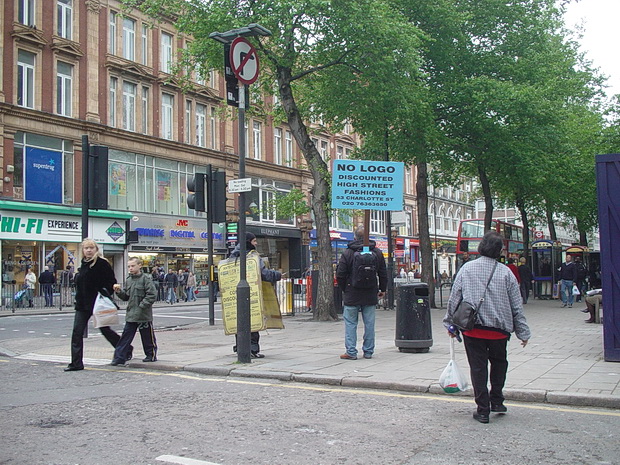 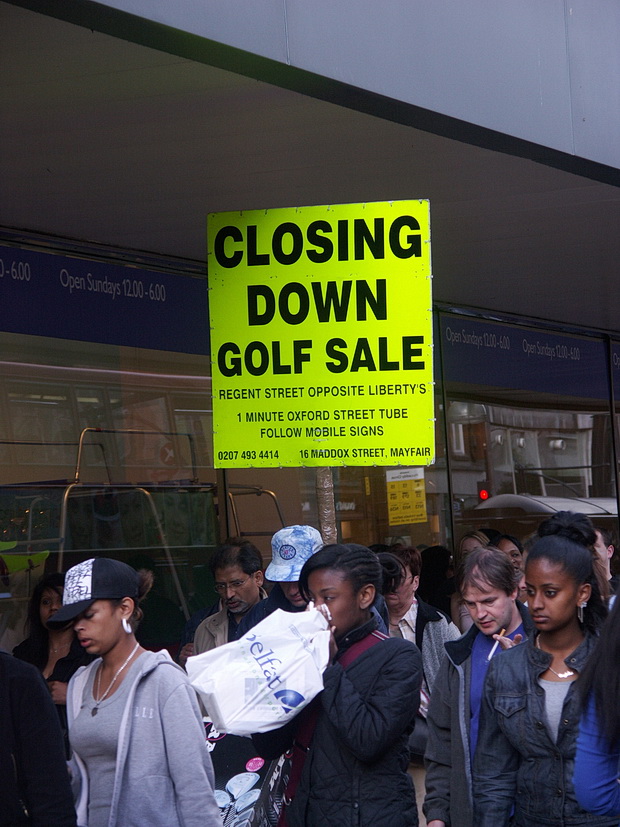 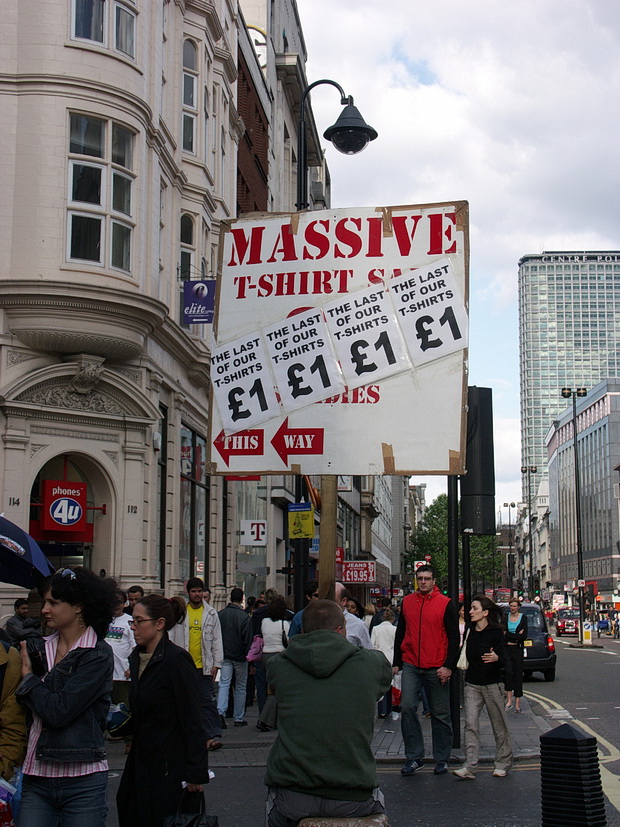 Perhaps the most famous human billboard of all was Stanley Owen Green (1915-1993), known as the Protein Man, who patrolled Oxford Street with a placard recommending “protein wisdom” for 25 years, from 1968 until 1993. 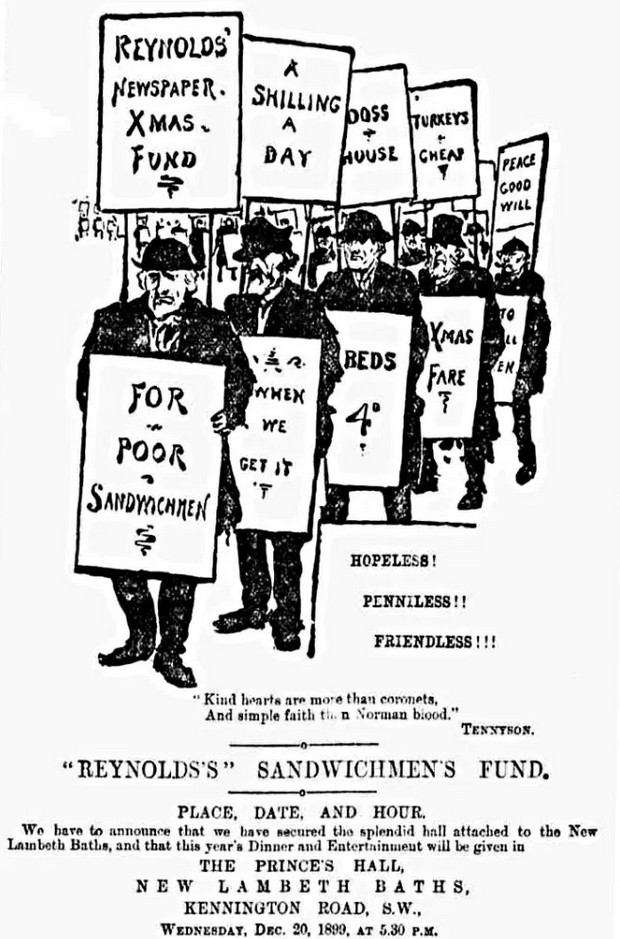 This late Victorian pamphlet advertises a ‘Sandwichmen’s Fund’ with a Christmas dinner for the ‘hopeless, penniless and friendless’ workers.

Join in the discussion on London street advertising here