As readers of this blog may know, I reluctantly abandoned my lifelong support for Cardiff City a while ago.

I posted up the reasons for my decision in a post that rapidly went viral, registering over 25,000 page views in 48 hours and sparking debates across many football forums. 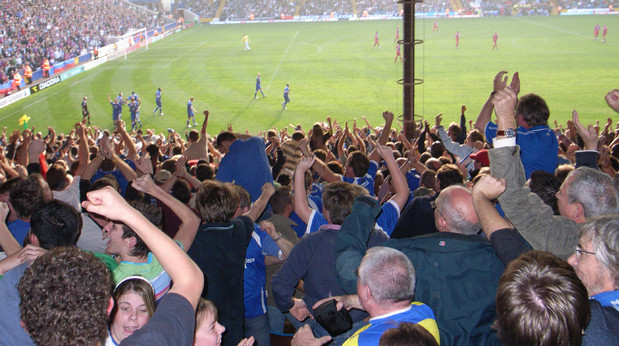 What had pushed me into writing the piece was the ongoing discussion about Cardiff City on the urban75 bulletin boards.

There’s been some interesting commentary about Cardiff’s situation added to the 650+ post thread, but I felt that this contribution from Bristol Rovers fan ‘strung out’ deserved a wider audience, so I’ve reproduced it below:

I’ve had my run ins with the Cardiff fans on this board, through many years of ‘lively’ rivalry with my own club. I hope my views on this as a fellow football fan are worthwhile though, despite the fact that Cardiff aren’t and never have been one of my favourite clubs!

For a club like Liverpool, your identity and history are based primarily on long periods of success. 18 league titles, 7 FA Cups and 5 European cups rightly give you a large amount of pride and memories based on the success of various teams and managers over the years. While there have been a few periods of adversity (Hillsborough obviously) the identity of LFC is largely based on domestic success and near misses.

For a club like Cardiff (or my own club) though, identity is made up of a far more complex mixture of events spread over a far smaller number of fans. While moments of success are fleeting, the ups and downs add up to a unique and complicated identity that makes the (comparatively) smaller groups of fans care far more about ‘silly’ things like nicknames, colours and the culture of the club.

The die hard fans have supported the club through the lows of the bottom division, the various instances of nearly going out of business, the various incompetencies of owners who have not only led to disasters like ‘not qualifying for Europe’, but threatened the very existence of the institution that binds the people and communities of Cardiff (or wherever) together.

So when someone comes along and tries to change that identity, to rip that history up and start again, to do whatever he likes to the club to suit his passing whims, of course it fucking hurts to see that identity and those shared histories trodden all over by some twat who thinks that he can do what he likes because he’s got more money than anyone else.

It’s all well and good pointing to the success on the pitch and saying – ‘well isn’t it worth it?’. Well that depends on what you value. If all you’re interested is trophies in the cabinet and success on the pitch, by all means go ahead and buy your red shirts and cheer on Tan’s red dragons.

If being a football fan means valuing your identity, remembering where you’ve come from and using that to build a more successful future for the club and the community it owes its existence to, then there’s no way that any true fan should be wearing those red colours and cheerleading the actions of Tan.

As a lower league football fan who’s got some idea of the place Cardiff have come from, I know exactly what I’d think of anyone who came in to Rovers and tried to do the same.

Through reading various forums and chatting on the terraces, I’m pretty sure that most Rovers fans would feel exactly the same. I’ve never really like Cardiff, but as a football fan, people like Tan coming in and ruining the identities, histories and cultures of football clubs in this country are sickening.

I support all true Cardiff fans in their opposition to Tan’s rebranding and wilful alienation of the lifeblood of the club. I hope they fail miserably this season, because I want a message to be sent that you can’t do this to football clubs here.