A few weeks ago, I invested an inordinately large sum of money in a new Nikon D70 dSLR camera and I’m happy to say that it’s starting to repay itself already! 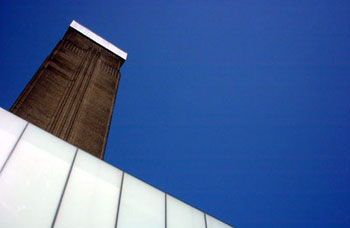 A New York agency got in touch saying that they had a client who loved this abstract photo of the Tate Modern and asked if I could mail over a high res version of the file, with the deadline being Wednesday.

Sadly, the photo was taken on a decidely low res digital cam, but I suggested that if they were prepared to grease my palm with some extra spondulas, I’d go out and retake the picture.

They agreed and then the stupidity of my offer sunk in. The original picture had a deep, blue sky behind it. This is London where blue skies can’t be guaranteed. Not even in summer.

Thursday was crap weather. So was Friday. But when I woke on Saturday morning, the sun was out! So I rushed out of the house but by the time I’d got out of the tube, it had gone cloudy again.
Arse!

In desperation, I took a load of rubbish grey photos, before sulking off into central London in a hissy fit. I hung about, grabbed some coffee and flipped through some record stores before giving up and walking up to Warren Street.

And then the bastard sun came out again! I quickly legged it all the way back to the Tate, managing to grab only 20 shots before the sun vanished again. 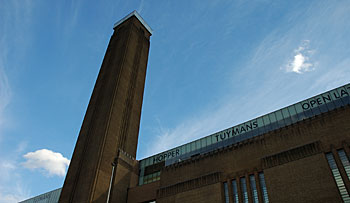 Happily, I’ve just heard from the client that they’re well chuffed with the photos, payment’s on the way, so I’m going to have some beers tonight.

The Thames, theatres, Tate Modern and a tutu