After the full-on anarchist argy-bargy of previous Mayday protests, this was rather a sedate and curious affair.

The main protest had been cancelled beforehand and replaced by a picnic in St James Park. This sounded like fun to me, so we popped along mid-afternoon and found a ball-less cricket game in progress, put on by those mischievous chaps, the Space Hijackers. 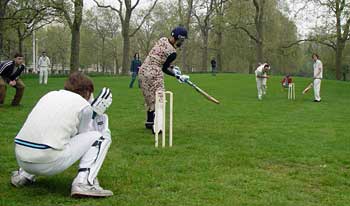 The players were nicely turned out in full cricket whites, with a small gazebo serving as a club house and pavilion (with pimms available).

Billed as ‘Smash Capitalism for Six!’, their accompanying leaflet implored you to “Bring your trusty wooden bat, swing for glory and whack capitalism across the boundary”. Wonderful stuff!

Because ball games are outlawed in the park by-laws, the cricketers played with an imaginary ball instead and took the virtual game very seriously indeed while the police looked on, baffled.

A large and unruly football game kicked off nearby, starring several urban75-ers with differing states of fitness and skill. 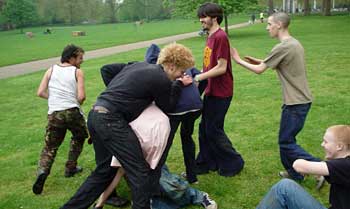 An ad hoc adherence to the rules was adopted, with the occasional ‘pile-on’ adding interest. I scored a fantastic goal (well, OK, the defender was only 11 years old and the goalkeeper was on the phone, but it still felt good).

Sadly, the football action was accompanied by some of the worst singing I’ve ever heard with painful ‘interpretations’ of punk classics being delivered by a tuneless woman, a trumpet player and – to add insult to injury – a fucking clown in full costume.

Happily a mobile sound system turned up later and pumped out some restorative ska tunes.

To be honest, I’ve no idea what the point of this year’s Mayday was.

But it was a hell of a lot of fun.