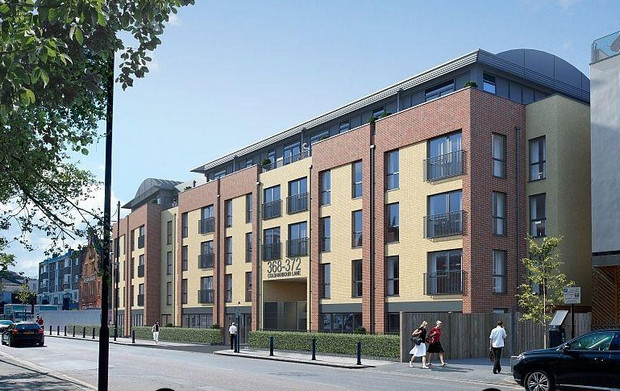 I’ll be honest: I walked right past Brixton Square tonight when Barratt Homes were holding their marketing day event.

I couldn’t bring myself to walk in when I saw the clipboard-toting, super-smarmy, swivel action suits doing their thing, but an intrepid reporter for urban75 bravely ventured in and has posted up what he saw.

And yes, they really are naming one of the upmarket blocks after one of Brixton’s most loved old pubs/squats (“Bradys“).  Another will be called ‘Windrush’ because that’s really appropriate for a block where the cheapest one bedroom flat starts at £265,000.

I went in, posed as a buyer and drank their free bubbly. I felt a bit dirty tbh.

Two Jamaican guys were stood on the pavement outside looking in and muttering something about “bloodclart rich workers.”

They are giving free ipads to people who make a reservation.

There are 5 blocks of flats in the development, which will be called “Windrush”, “Academy”, “Ritzy”, “Brady” and “Village”.

Flicking through their glossy brochures (full of pics of Brixton Village, pics of people raving it up in the Academy, and pics of parks which aren’t even in Brixton) I was soon cornered by an agent who started giving me the spiel.

I was probably the scruffiest person in there but she still asked me if I was a buy-to-let investor (!) and handed me a sheet showing potential rental income and annual gross yields etc.

I was interested in their reaction about the “affordable homes” thing and was about to ask when she handed me a plan of the building showing the make up of affordable, private, commercial etc (I’ll scan it and post it up if anyone’s interested?)

The ‘affordable’ bits of the building seem to be stuck in the back corner of the development (next to the railway lines) on each floor.

There are some flats on the ground floor (which face Coldharbour Lane) which were marked “planning to be agreed” which I assume are the flats in question re: the change in planning we’ve been discussing.

I made my excuses and left. I felt pretty miserable about the whole thing, which was compounded when I got back outside and saw one of the agents had parked their car right across the pavement. A guy in a wheelchair was coming along the pavement and had to go out into the road in rush hour traffic to get past the car.

And how much will these flats cost to rent? Take a deep breath and scroll down:

Read more and join in with the discussion on Brixton Square on the urban75 bulletin boards.