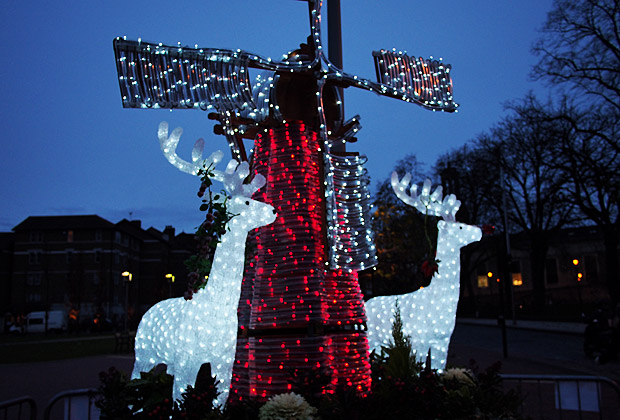 Here’s my review of the Christmas lights seen around Brixton. Sad to say, they seem to be getting meaner and meaner with every year.

Above is the rather curious windmill/reindeer combo that can be found marooned in an expanse of concrete in Windrush Square. 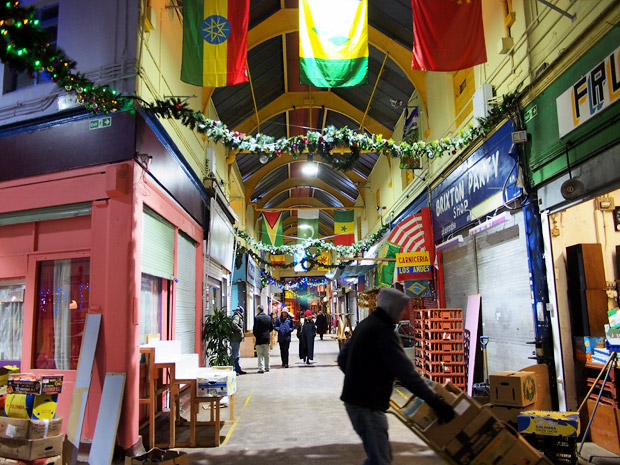 Brixton Village/Granville Arcade has made a rather fine effort this year, with some rather lovely understated decorations hanging above the Avenues. 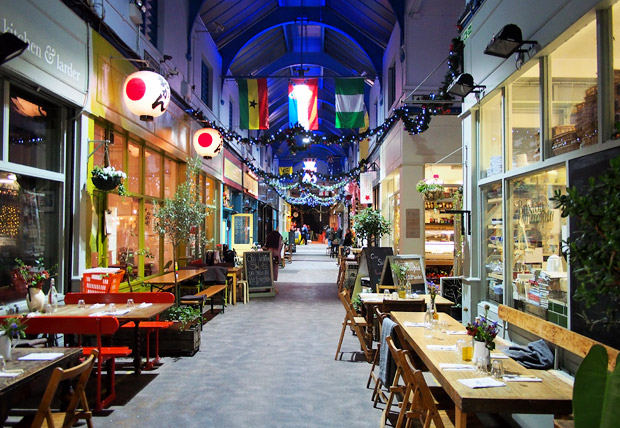 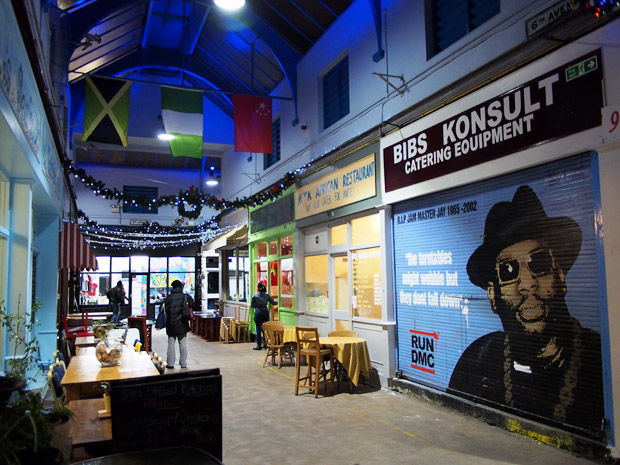 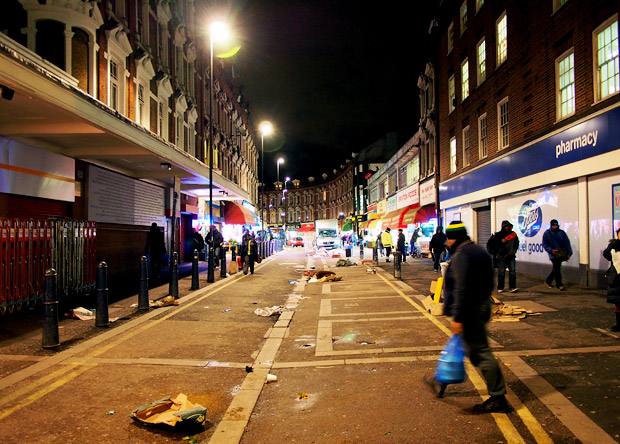 There’s not even a hint of festive cheer to be found on Brixton’s Electric Avenue – a street that was once famed for its elaborate Christmas decorations. 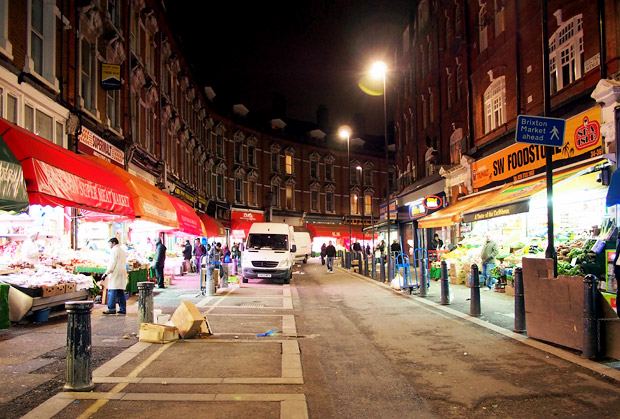 Here’s the equally bleak view from the Atlantic Road end. 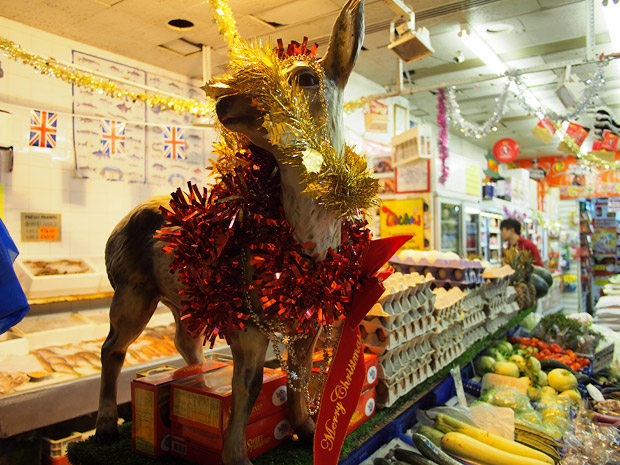 At least some of the shopkeepers had made some effort! 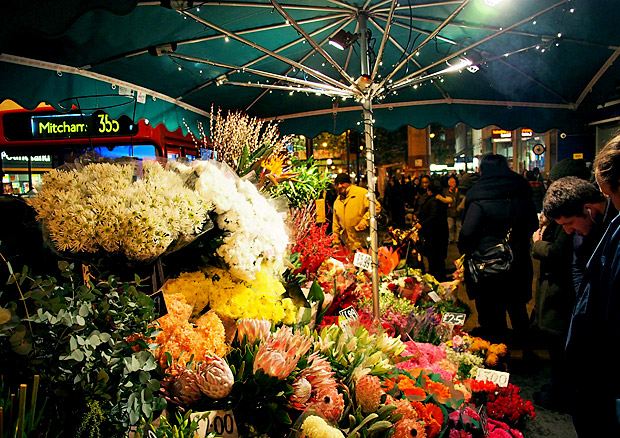 Christmas lights on the flower seller stall opposite the tube station. 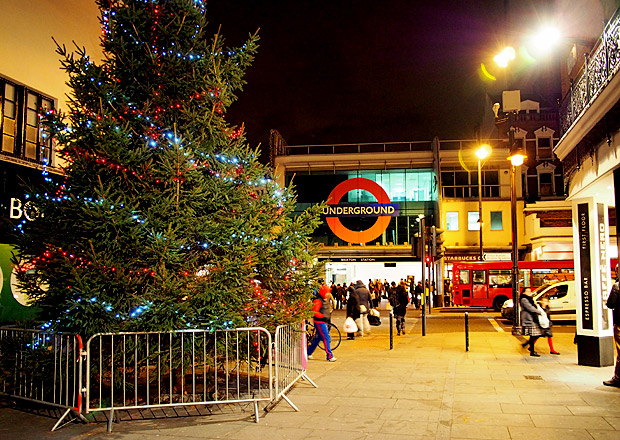 Morleys can always be relied upon to put up a rather splendid traditional tree, even if the Council’s effort get less and less festive with each passing year. 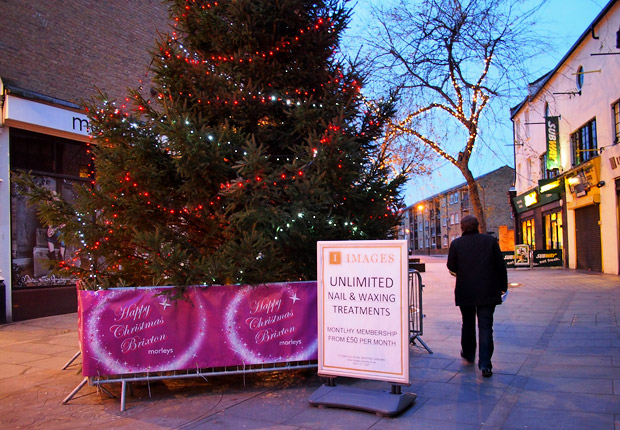 It’s something of a shame that a great big tacky sign advertising nail and waxing treatments seems to be permanently stuck in front of the tree. 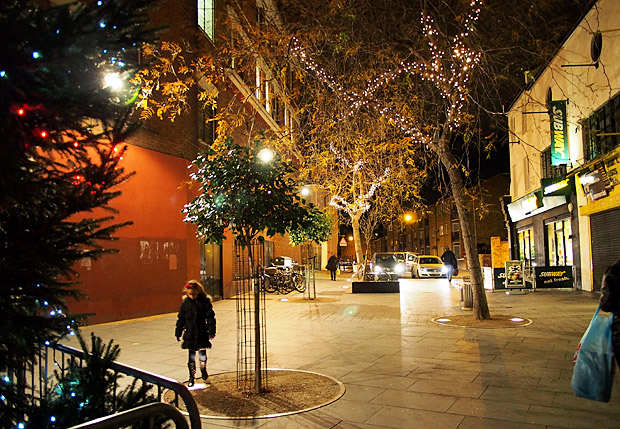 Lights on the trees by Morleys. 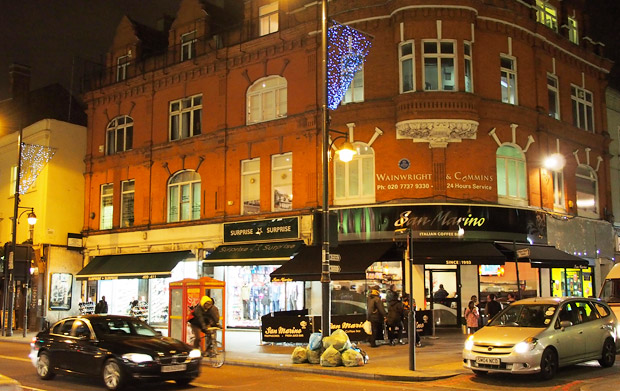 Those little triangles of LED lights are as good as it gets on Brixton Road. 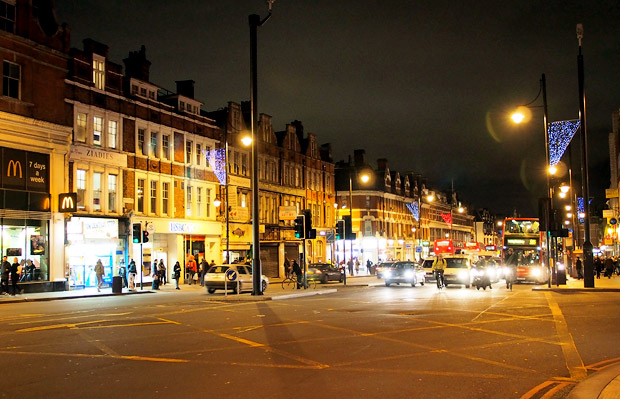 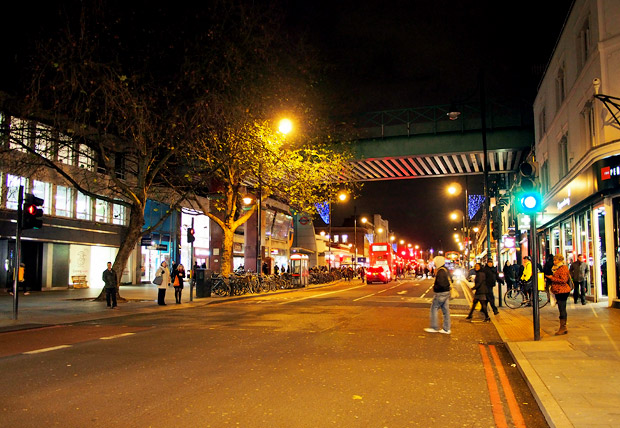 Let’s face it. It’s not looking very festive at all in the centre of Brixton, is it? 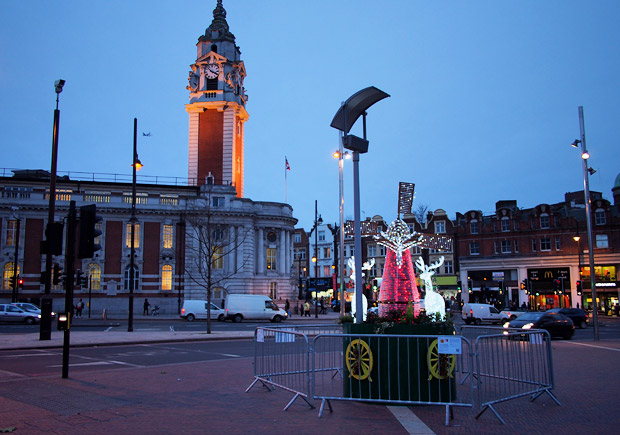 Here’s the Windmill decoration, plonked opposite the Town Hall and surrounded by railings. 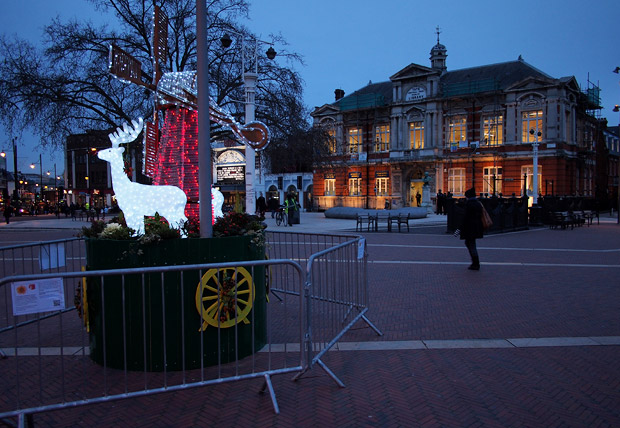 It’s a pretty grim scenario on Windrush Square – surely it couldn’t have been too much trouble to sling some lights on the big tree opposite the Ritzy. And a proper Christmas tree might have been nice too. 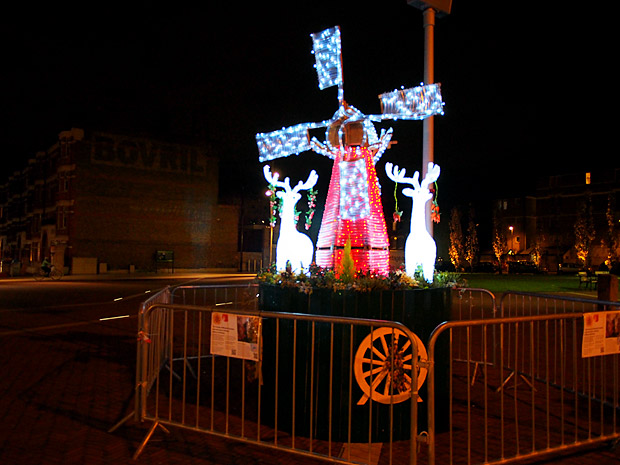 The illuminated windmill and reindeer in Windrush Square. 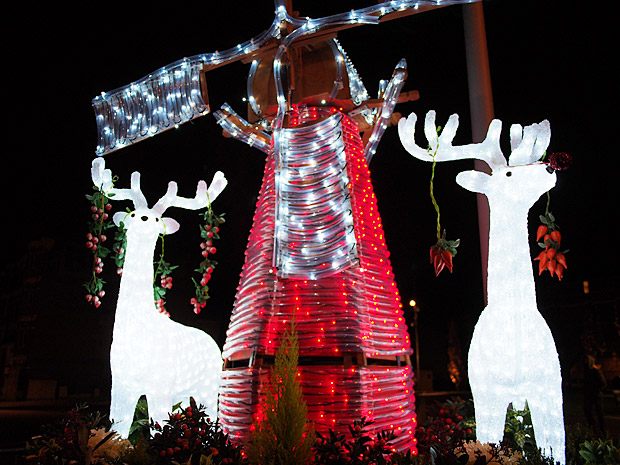 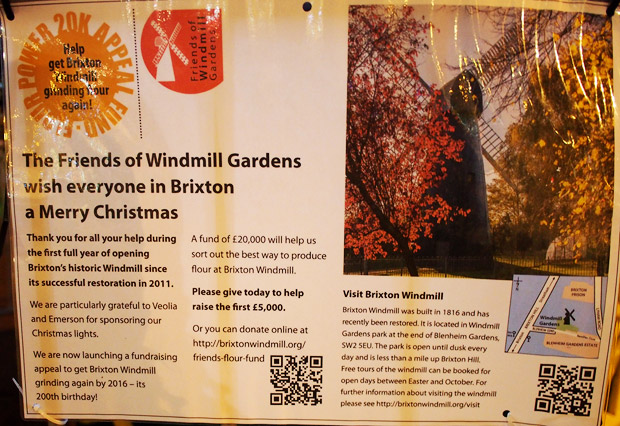 Info about the Windmill. 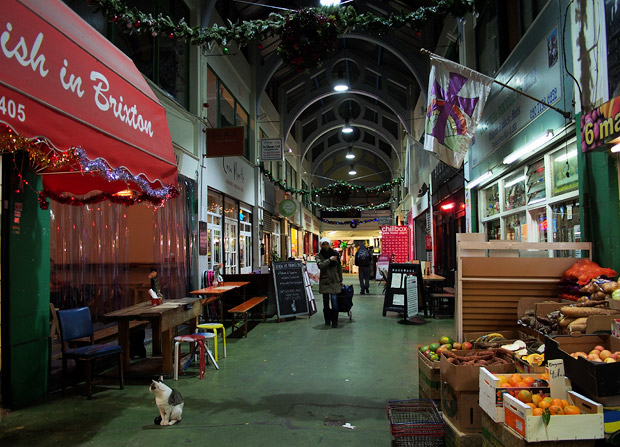 The rapidly gentrifying Market Row had made some effort too. Note one of the market cats in the foreground being camera-shy! 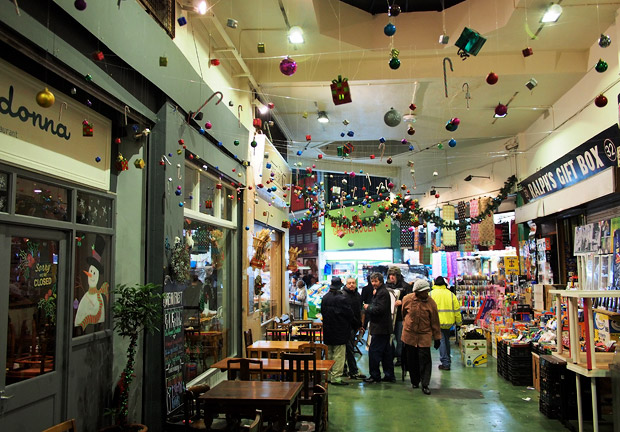 Hanging baubles opposite Ralph’s Gift Box. Let’s hope the shop is still here next year, but with rents rising through the roof, many residents are fearful for the future of the traditional stores in the market. 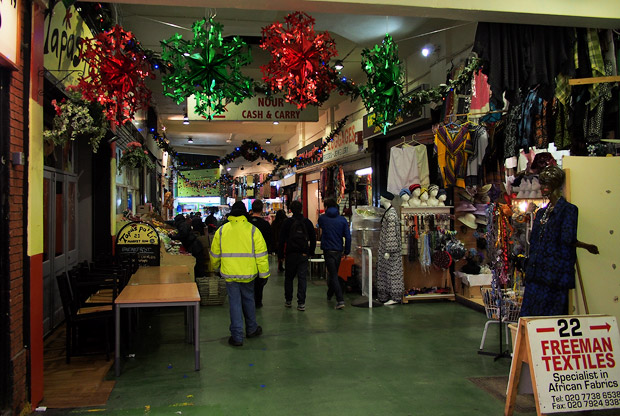 Decorations by Nour Cash & Carry, another store that is under threat.

There’s still two weeks until Christmas, so maybe some new decorations may appear, but at the moment, it’s looking about as parsimonious as I can recall.

But looking on the bright side, at least we haven’t been burdened with Marmite decorations.

One Comment on “Christmas lights around Brixton town centre, December 2012”