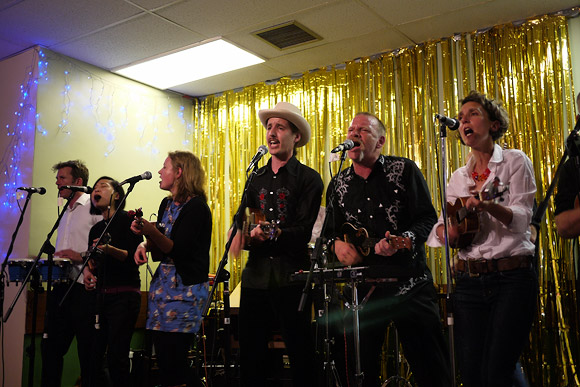 With Japanese rock, Morris dancers, Actionettes and our good friends the Dulwich Ukulele Club playing live, the May Ball at the St. Thomas More hall in East Dulwich was well worth the trip into darkest Dulwich.

The venue is located at 116a Lordship Lane and is a bit of a bugger to find – so much so that by the time I’d cycled there I’d missed the first act on the bill, the New Esperance all lady Morris Dancers. 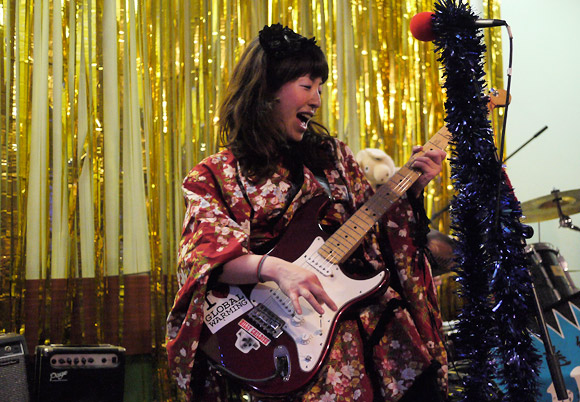 Happily, I was there in time to catch the enormously entertaining No Cars -a  female power trio from Japan (via Hackney). 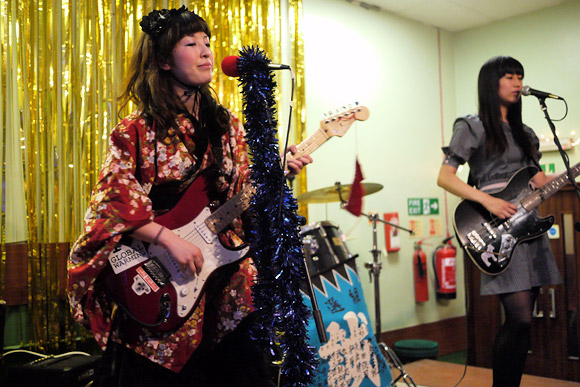 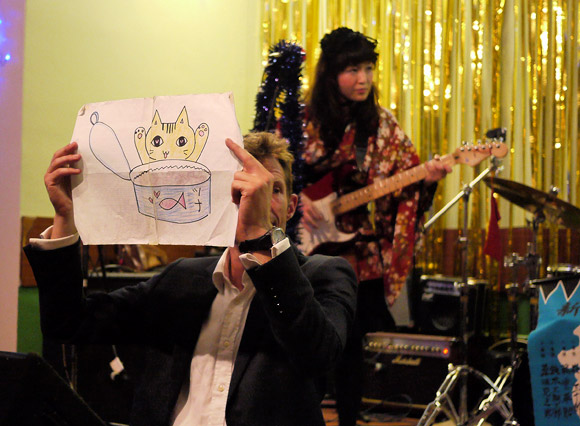 A member of the Dulwich Ukulele Club was enlisted to hold up a drawing for each song. 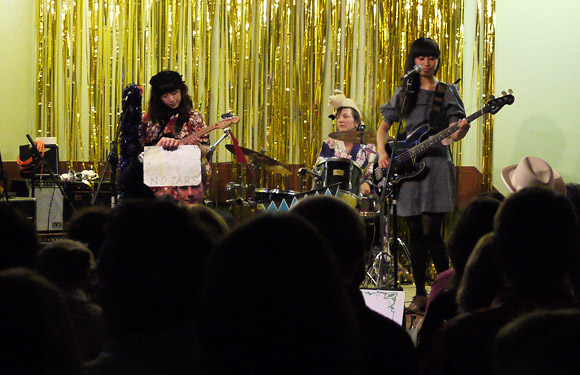 No Cars playing their fabulous “I Love Sellotape” song. The band were witty and sharp – and I hope to get them along to an Offline Club night soon! 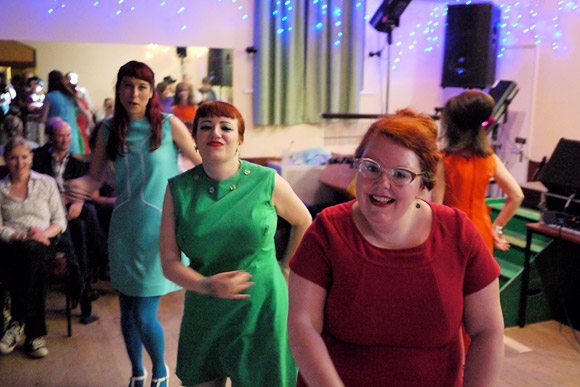 Next up was the 60s go-go girls, the Actionettes. 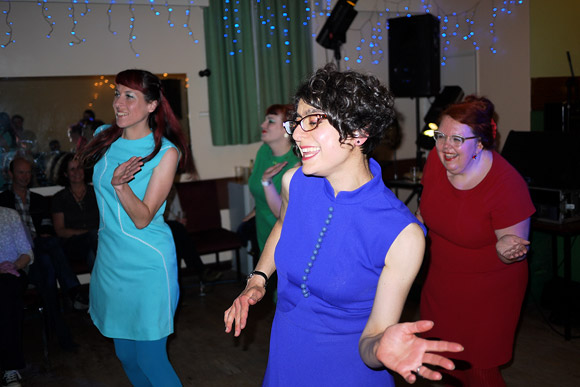 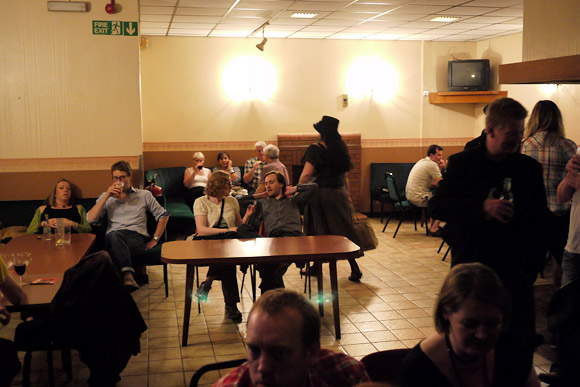 The venue really was an odd, and slightly depressing place.

It reminded me of the old working mens clubs I used to play in the Welsh valleys, with horrible stark lighting, old fashioned furnishings and bar staff that could only be described as ‘less than enthusiastic’.

The hall even had roll down shutters on the bar that gradually slid down as last orders approached. The last time I’d seen some of them was on a cross channel ferry! 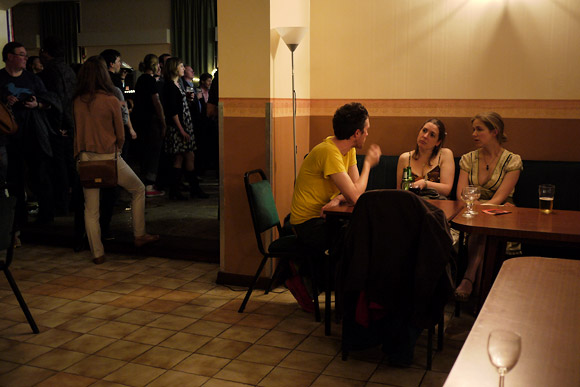 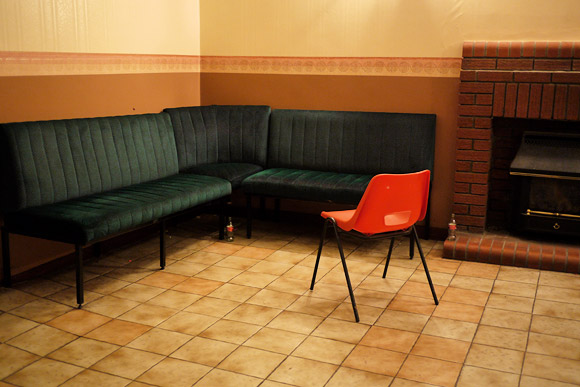 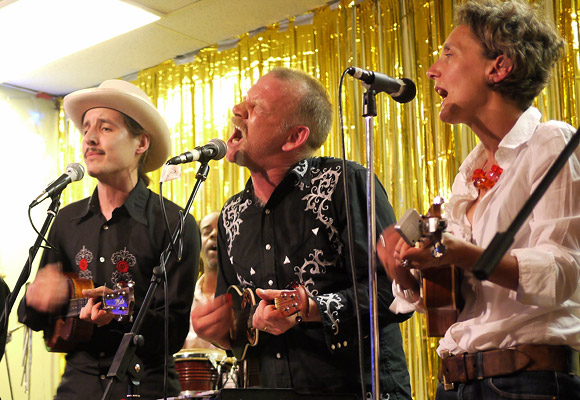 Headliners, the Dulwich Ukulele Club rocking the stage. The band were a heap of fun. 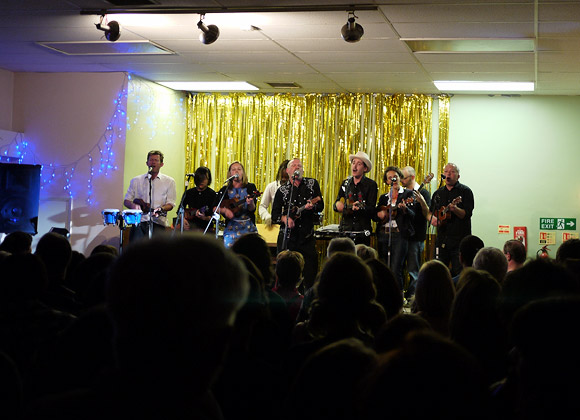 The kindest way I could describe the stage lighting would be to suggest that its stark, all white lighting was perhaps hoping to emulate David Bowie’s 1976 Station to Station tour which was famously Spartan.

But that really is being too kind. It’s a pretty awful stage set up and I’d certainly never want to put on a show here. 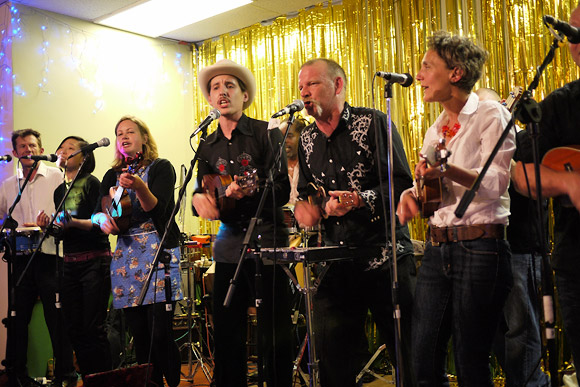 That said, the band’s energy levels made you forget the grimness of the venue and the set went down a storm. 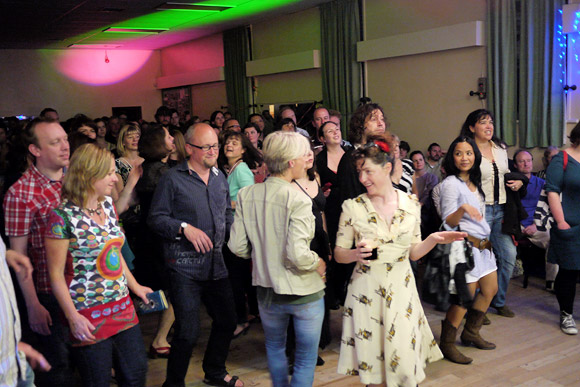 Crowd inside the hall enjoying the band.

Moments after the band finished, you could almost hear the sound a large lever being slammed down as a flood of harsh, unforgiving  fluorescent light beamed down from above conveying one simple message: leave the venue immediately.

One Comment on “Dulwich Ukulele Club May Ball – Japanese rock, go-go and ukuleles”