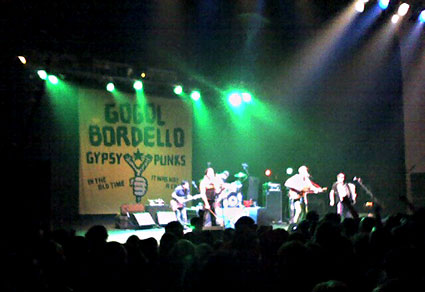 Sorry for the crap pics (taken on my trusty Treo 650), but Gogol Bordello were amazing tonight at the Brixton Academy.

It’s a great, old school, large size venue with no seats and none of this ‘you can’t bring beer into the arena’ bollocks and perfect for the no-nonsense, rip it up gypsy punk of the band.

Here’s their description on Wikipedia:

Gogol Bordello is a Gypsy punk band from the Lower East Side of New York City that formed in 1999. They are renowned for their frenetic, theatrical stage shows. Much of their sound is inspired by Gypsy music, as most of their members are immigrants from Eastern Europe. The band incorporates minor-key accordion and fiddle (and on some of their albums, saxophone) mixed with cabaret, punk, and dub.

They were described by Phil Jupitus on Jools Holland Live as a bit like “The Clash having a fight with The Pogues in Eastern Europe.” 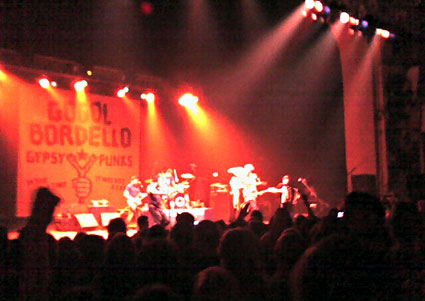 We loved ’em, and the later on retired to the Albert for some top sounds, courtesy of DJ Miss Feelgood.

Offline Club: recommended in Time Out!

THE LUCKY FACE, DR VAMPIRE and THE NO FRILLS BAND, Brixton