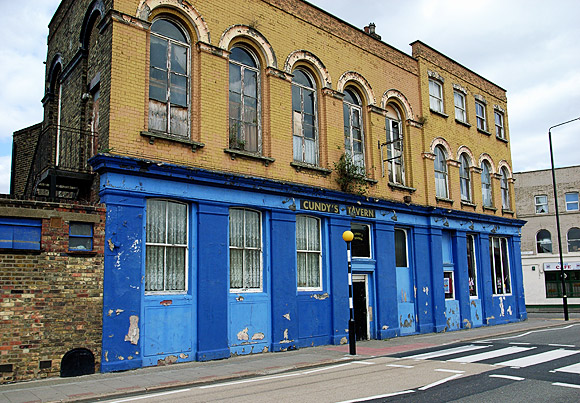 Captured here in its last death throes in May 2005 is Cundy’s Tavern in Silvertown, reputed to be one of East London’s dodgiest boozers. 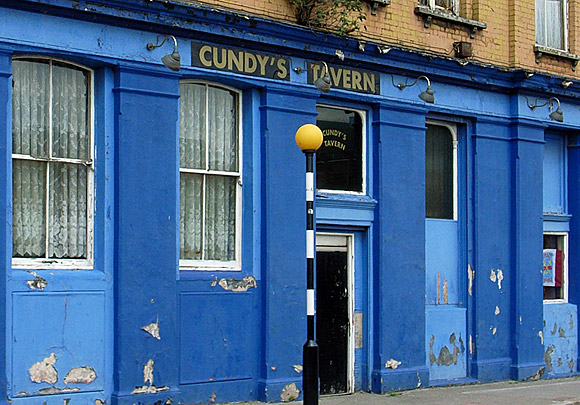 Despite appearances, the pub was still open for business, although the pub sign had long since vanished.

Originally known as the Railway Hotel, but  renamed Cundy’s after a former Edwardian landlord, Simeon Cundy, the pub served workers in the nearby Tate & Lyle factories and railway workers (the former Silvertown station is opposite), and from 1981-1986 hosted Peacock’s gym.

The pub staggered on for another year after I visited, before being captured in its boarded-up state (below) by Flickr photographer O.F.E who wrote an excellent history of the pub’s dark and dubious end – a tale that involves strippers, housing benefit repayments and rented out ‘death-traps’. 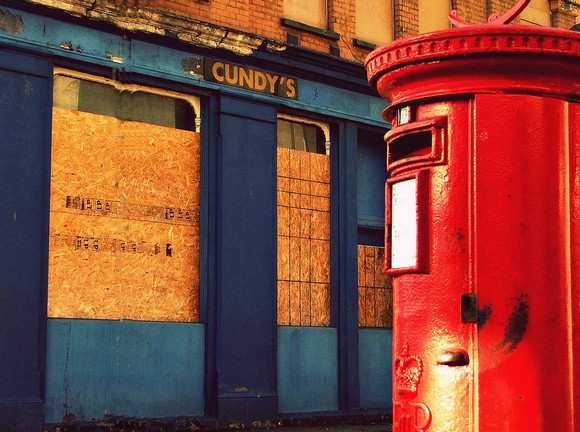 Before it closed, the aptly named Dodgy Boozers website paid Cundy’s a visit and found it an educational experience:

Derlict corner site. Plants growing out of upper story, lower story painted blue. No signage whatsover other than landlords name painted on front door frame in what looks like tippex. Empty pub sign swinging in the wind. ALL windows broken and mended with cling film with stained heavy half nets behind. Pub has a couple of medium-rise blocks behind, a pot holed street in front and the ghostly single track Silverlink North London train line beyond.

The next stop is the end of the line. Main door is on corner of plot and has a roll-down beaten steel shutter. There’s no door behind this once it’s opened. Side door to same room also has a roll down shutter.

This is half open and legs can be seen of the drinkers already positioned for a pre-opening taste at the bar. Inside is fading grandeur. Chipped columns rise behind the L-shaped bar, mismatched chairs are dotted around and grubby red velvet booths hug the walls, many repaired with gaffer tape from deep knife wounds. Raised pool table area at the back has missing wall lights, damp down one wall, and scribbled signs about drug use on the premises. 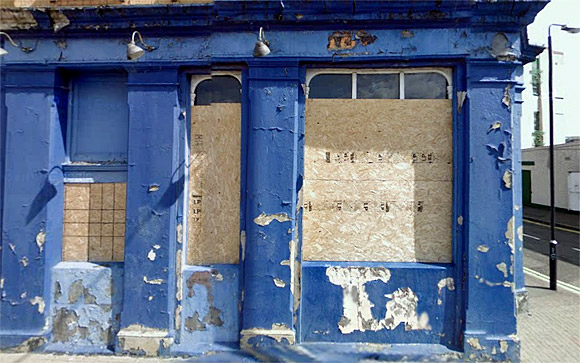 Planning permission has now been given for a mixed used residential site with “angular glazed balconies and recessed windows…and anodised aluminium panels,” so it won’t be long before this fine building and its rich mix of East End memories disappears forever. 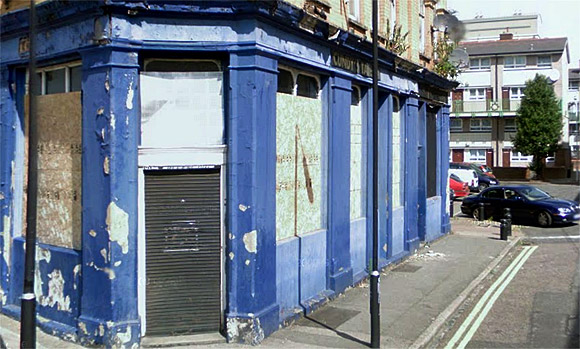 Discuss the pub on our boards