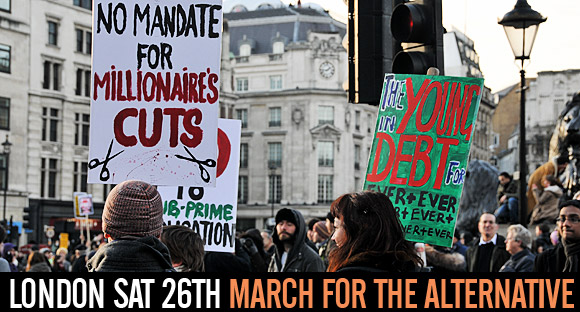 The Government is introducing spending cuts that will damage public services, put hundreds of thousands out of work, have a terrible impact on the vulnerable, damage communities and undermine much of what holds us together as a society.

This Saturday (26th March) is your chance to let the government know what you think of their crappy plans. With gusto.

HYDE PARK IS WHERE IT’S AT

Organised by the TUC, the main march will form up from 11am on the Victoria Embankment between Waterloo and Blackfriars bridges and proceed through central London until reaching Hyde Park, where the rally will start from around 1.30pm.

The TUC has recommended that people don’t get there too early, as The Guardian explains:

The march is due to begin forming up at 11am at Victoria Embankment but despite the numbers expected people should avoid the temptation to get their early – or even “on time”. According to the TUC people are still likely to be crossing the start line on the Embankment at 2pm so organisers are calling on people to stagger their arrival times between 10.30am and 1.30pm. 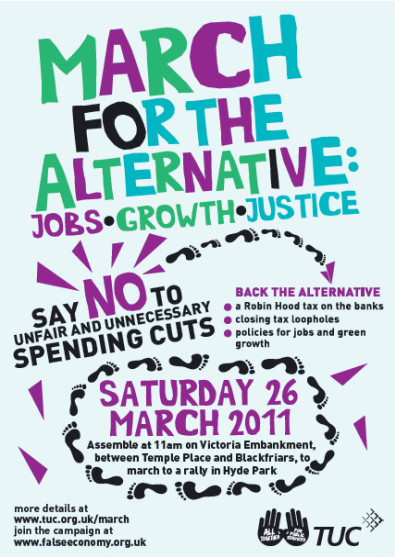 There’s loads of alternative meet up points – I’ll probably go for the South London feeder which meets at Kennington Park at 11am – see more info here.

UK Uncut have revealed plans to take over retailers and banks on Oxford Street, London’s busiest shopping street on the day:

3.30pm – UK Uncut will announce and occupy a secret target – and aim to stay for as long as possible

There’s all sorts of alternative/random/ad-hoc actions being dreamt up, including the fabulous sounding Buggy Bloc, Queer Resistance‘s Pink & Black bloc, a Network X call out, People’s Assemblies, Occupy London, and a call to Turn Trafalgar into Tahrir Square.

See this Action Map to see what the Anarchist Bloc will be up to.

This handy listing of events and actions is perhaps the most useful of the lot.

There’s a good chance some of us will end up being forcibly detained by the Met Police’s dodgy kettling tactics, so make sure you’re prepared.

Make sure you pack these in your bag:

And don’t have to forget to have fun! You’re part of something special and you’re making history!

Keep checking Twitter, Facebook and even trusty urban75 for the latest updates and news about what’s happening on the day. Share info and warn people of impending dodginess.

A squat has just opened up at 61 Curzon Street, Westminster W1J 8PD offering loads of meeting/sleeping space for protesters.

DOCUMENT WHAT HAPPENS – YOUR PHOTO RIGHTS!

Take cameras, mobile phones, notebooks and note down details of any incidents. Note that the police can not – under any circumstances – force you to delete any photos you have taken. 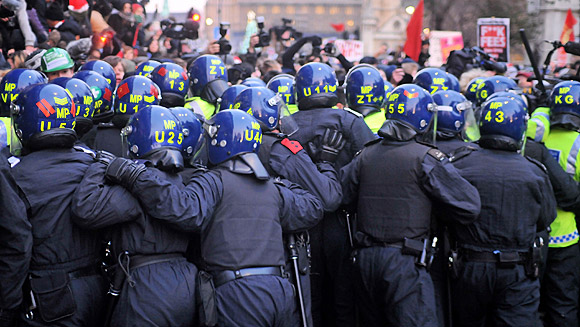 Here’s the two numbers you’ll need if you get into trouble with the law. Write them on your arm if you want to make sure you don’t lose them!

Remember that if you are kettled, you are under no obligation to give your name and address.

You do not need to talk to the police about anything. If you are arrested, giving your name and address will speed up the process of being released. Any other information may be used against you and once you start talking it can be hard to stop: so don’t say anything, it is easier! If they ask you questions, just say ‘no comment’, until you have spoken to a solicitor and don’t sign anything.

DON’T USE THE DUTY SOLICITORS

If you’re arrested you have a right to FREE legal advice. You can use a ‘duty solicitor’ but we STRONGLY advise against. If you haven’t been told at the protest of local solicitors who have experience of dealing with protesters, we recommend you use BINDMANS ( 0207 833 4433 0207 833 4433) who should be able to come to your interview if you are in London or otherwise advise you by phone on what to do.

DON’T GIVE YOUR NAME AND ADDRESS TO COPS

When you are stopped or searched under any search powers, you don’t have to give the cops your details. The only time you are legally required to give your name and address is if you are driving a vehicle or involved in a road traffic accident. If you are suspected of anti-social behavior (causing harassment, alarm or distress) or when the cops want to issue you with a summons with or fixed penalty notice, then the cops can arrest you if you fail to give them your details. If you are arrested but you think there is no good reason for your arrest, the police may be just trying it on to get your personal details (they have a database to fill). At this point you can still refuse to tell the arresting offiver and say that you will give your details to the custody officer at the police station. You may find you are simply released so it can be worth waiting it out.

AVOID LETTING THEM PHOTOGRAPH YOU

You don’t have to make it easy for them to photograph you – they have no power to force you to comply with being photographed or filmed unless you are being processed at the police station.

There’s already been over 400 posts about the march on our busy boards, so feel free to add your opinion, ask for advice or just chew the fat – Chat about the March on our bulletin boards

JOIN THE FREE PARTY AFTER!

We’re hosting a free party in the Brixton Prince Albert after the march (assuming we escape the kettle!).
We’ll be showing photos and video clips from the march on a big screen, plus we’ll have a great live band and DJs till 3am.
You’re all welcome! Prince Albert, 418 Coldharbour Lane, Brixton SW9 8LF.

If you’re unable to make the march, The organisers have created a handy resource to “map solidarity messages around the country from disabled people and allies who cannot make it to the march.” There’s also an Armchair Army Virtual March group for those not able to attend.

Why we’re marching [TUC]
There is an alternative: The case against cuts in public spending [PCS]

More? Chat about the march on our bulletin boards!