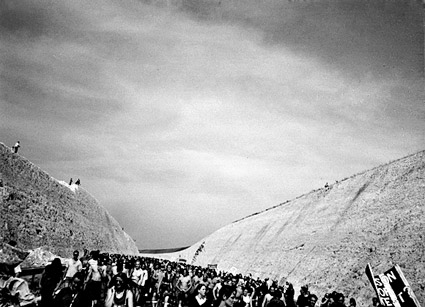 It seems like an eternity ago now but at the time it was a mighty important battle against the Tories’ mad, mad, mad plans to implement “The biggest road-building programme since the Romans.” 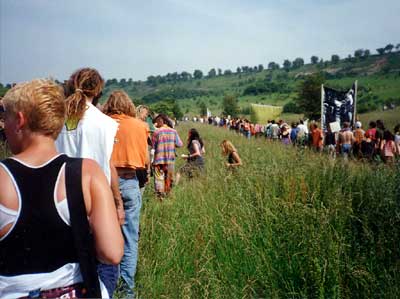 In December 1991 Twyford Down became the site of the UK’s first road protest camp when environmentalists, including members of Dongas and Earth First! gathered to hinder work. After a year this first camp was evicted on Yellow Wednesday, named after the uniforms of the Group4 security guards who performed the eviction in December 1992.

Resistance to the road intensified and Earth First! set up a new protest camp nearby in Plague Pits Valley, and continued to obstruct the work both on the water meadows and up on the Down itself. In addition to many actions there was a mass trespass when over 5000 people attended the protests and occupations, and six people were sent to prison for some weeks for defying an earlier injunction not to enter the site. (Wikipedia) 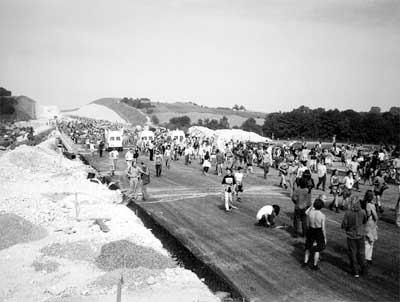 There was a defiant march by protesters along the completed motorway just before it opened, and it was an incredibly hot day. I’ve still got a ‘do not trespass’ sign from the site in my bathroom!

Join in the Twyford Down discussion on our bulletin boards.

Save our libraries protest outside Brixton Library, Feb 5th 2011