There’s so much wrong with this I don’t really know where to begin.

It starts with some self-styled “infamous urban artists” co-opting ‘guerilla knitting’ in the name of a big fat corporate client and a global advertising agency, and ends up with the action being lauded for “whitening” Brixton’s image. 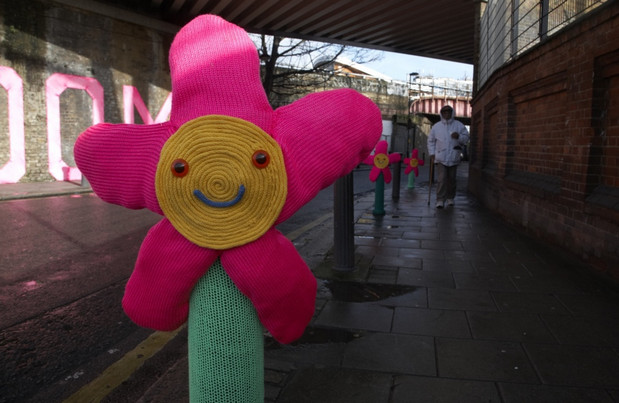 Here’s the background: Knitting duo The Fastener and Deadly Knitshade (Knit the City) decided that what Ferndale Road in Brixton really needed was an advertising stunt for Toyota’s ‘Positive Power’ campaign, something that had been dreamt up by folks at the Thatcher-loving, Tory-funding ad agency,  Saatchi & Saatchi.

Using Brixton’s streets as a free backdrop for their brand-pushing ‘street’ activities, the ‘yarnstormers’ shoved a load of knitted flower-like creations over the street’s bollards while the corporate publicity machine rolled into overdrive to capture the ‘quirky’ event for some edgy social networking promotion.

With both the ladies from Knit The City happy to pose for pictures during the ‘guerilla’ action, it seems that perhaps they weren’t being entirely truthful when they described yarnstorming as being all about, “conjuring up a piece of knitting or crochet, taking out out in the world, releasing it into the wild, and running away like a mad thing.”

The Ferndale Road action was enthusiastically reported in brand magazine, Popsop, who managed to dream up this pile of offensive, inaccurate shite while attempting to describe Brixton to their readers:

The district, which used to be quite an unpleasant part of the city in the 80s (it was associated with bombing and riots then), has whitened its image and become a nice, multicultural area—and the new project adds another lively and optimistic touch to the transformed atmosphere of this place.

With the area now nicely whitened up, Laurence Quinn, Creative Director at Saatchi & Saatchi lavished more praise on the venture:

The Yarn Stormers are a great example of a how a small number of people can create a large amount of positivity, as well as having some fun doing it. We’re glad we could lend our support and be a part of another one of their amazing knitted spectacles.

If your stomach can handle it, you can read more about Toyota’s meme-appropriating ‘Positive Power’ antics here, or discuss the (ahem) ‘graffiti yarnstorm’ on the ever-lively urban75 bulletin boards.

Let me clarify something. I’m Popsop editor. It has come to my attention that you found one of Popsop articles to be racist. I’m very sorry, however, that is not true. That was just the wrong wording and factual inaccuracy. NO racism was meant there. And, of course, it has nothing to do with Toyota’s “guerrilla actions”.

Anna Rudenko is a freelance news editor from Ukraine. This is not her fault, but mine. Our team is multicultural and we do have strong Russian connections, as we have a partner website Popsop.ru in Russian.

That confusing part of the article has been removed. My team and I sincerely apologise for any confusion or troubles this may have caused.