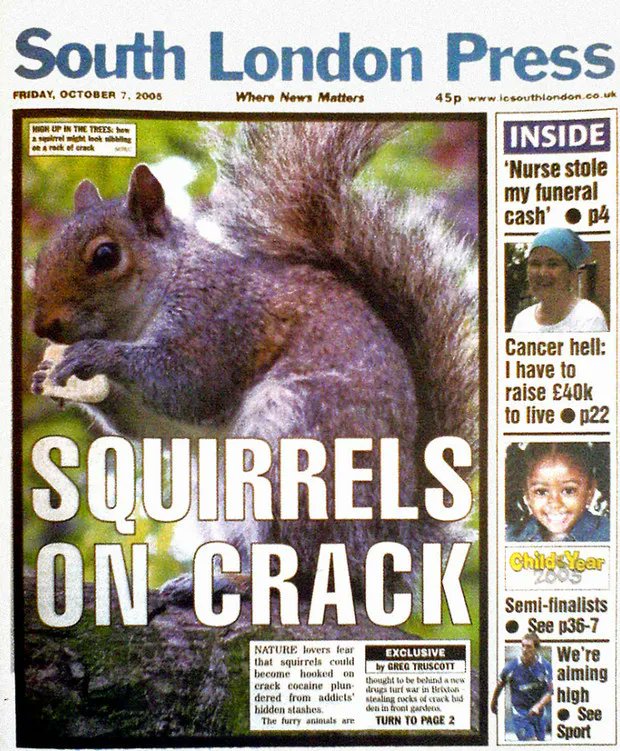 Daft story of the day – from the South London Press.

It’s about squirrels supposedly becoming addicted to the crack rocks that addicts have been stashing in Brixton front lawns late at night.

Curiously, a near identical story was reported by one of the urban75 posters last week….

Here’s what the urban75 poster said:

Yesterday I was chatting to one of my neighbours and he pointed out that the reason I had found his screwdriver in our front garden (in central Brixton) was that crack users / dealers sometimes hide bits of their stash in our garden.

An hour earlier I’d seen a squirrel wandering round the garden, digging in the flowerbeds.

And here’s what appeared in the South London Press a week later:

“I was chatting with my neighbour who told me that crack users and dealers sometimes use my front garden to hide bits of their stash.
“An hour earlier I’d seen a squirrel wandering round the garden, digging in the flowerbeds.
“It looked like it knew what it was looking for.
“It was ill-looking and its eyes looked bloodshot but it kept on desperately digging. “It was almost as if it was trying to find hidden crack rocks.”

Could they, perchance, be related?

April Fools on urban75: an attack of the Comic Sans