Blimey. I was a bit surprised to see that someone had gone to the trouble of putting up YouTube videos of mod images accompanying two of our live recordings from the Mods Mayday 79 album.

Beggar – ‘Broadway Show’
We were dead chuffed to have John Peel describe this as being “the best track on the album.” High praise indeed!

We recorded the tracks at the Bridgehouse pub in Canning Town, east London, and the whole session was a bit of a rush job.

There were six or seven bands being recorded live on the same night, so it was a case of get on stage, knock out five or six songs in one take and that was your lot. No retakes, no overdubs. Bish, bash and bugger off.

We had a gig at the Saxon Club in Walthamstow later that night (our own mod club night), so we had to scarper off quite sharpish at the end. 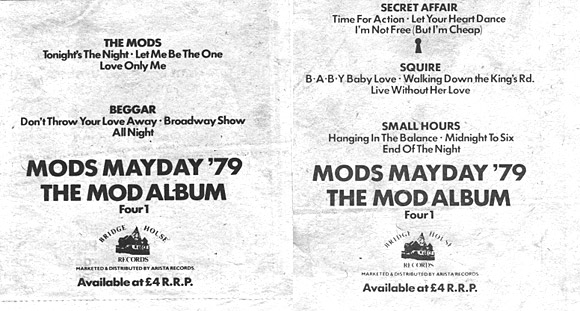 The live recording was done on Ronnie Lane’s mobile studio, a 26′ Airstream trailer, which was parked outside. It looked like something from the set of Space Odyssey to me with its streamlined aluminium lines.

I was later humbled to learn that the same studio had been used to record such incredible albums as The Who’s “Quadrophenia” (still one of my favourite albums of all time) and Led Zep’s “Physical Graffitti.”

Three of the tracks ended up on the album, but a few years later I was a bit surprised to see a ‘Mods Mayday 2’ being advertised, with three more of our songs listed.

I was particularly surprised because I can remember one of the songs was our soundcheck which we didn’t even play through to the end after the engineer gestured to us to stop playing.   A cunning fade-out papers over that particular crack on the album!

Beggar – ‘All Night’
Sadly this video uses the same images as the first one, but here it is anyway!

The album lives on!

It’s great to see that the album has reached some sort of semi-legendary status, enjoying multiple reissues over nearly thirty years – and it’s still available now on Amazon: Mods Mayday ’79 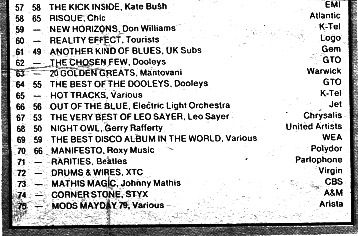 Although it did reasonably well at the time – it even hit the Official Top 75 charts, jostling for position against the likes of Kate Bush, XTC and, err, STYX – the critical reception was pretty mixed (Sounds loved it, NME were luke-warm and MelodyMaker weren’t too impressed at all).

Shame I never got paid for any of those later releases, mind – in fact, I think my total payment from the start amounts to the one chicken wing I managed to grab at the launch party at the Bridge House pub back in 1979.

My mod past – Mods Mayday and all that

Modstock at the Rocket in Holloway Road