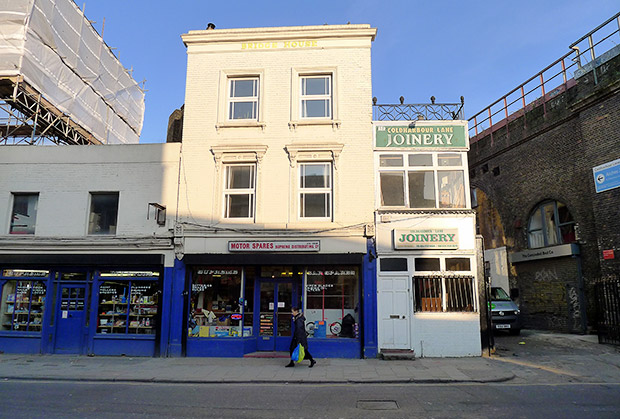 Famously described as “in motion”  by some over-privileged halfwit, Loughborough Junction remains a world away from the hoity-toity South Hampstead outpost of Brixton Village, just a mile up Coldharbour Lane. 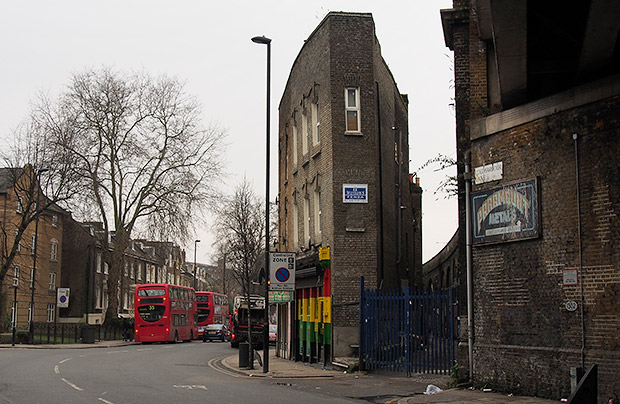 The place has been hit hard in the last couple of decades, losing almost all of its pubs (only the nearby Hero of Switzerland and the Cambria remain).

At least some good cafes have emerged to fill the void, including the Beanery by the station, and SIA Community Arts Cafe (feature coming soon!). 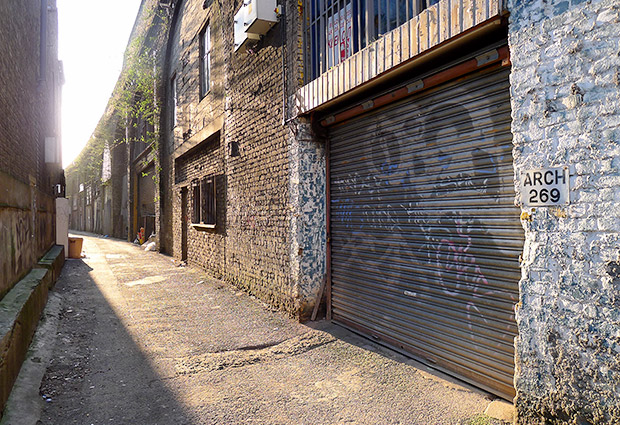 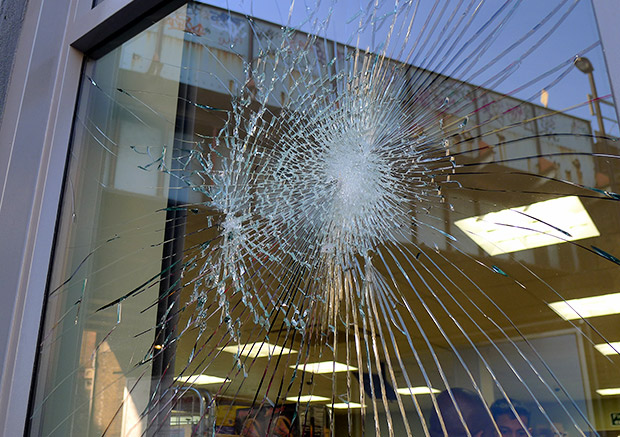 Replacing at least two of the pubs are supermarkets, with the once-famous Junction (Warrior) now a Tescos.

There’s been a determined campaign of resistance from some locals, with freshly broken windows now becoming a regular feature of the Tescos frontage.

The long-standing independent shop opposite has already been forced into an expensive refurbishment to try and compete. I hope it works out for them. 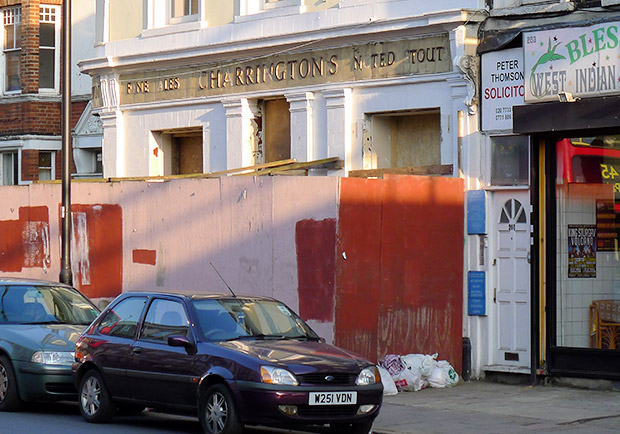 Back in the 1960s, a railway station getting a paint job was often an indicator of its impending closure.

This trend now seems to be echoed with pubs: whenever you see the attractive original façade being carefully exposed, it’s almost certainly a sign that it’s never coming back as a pub.

Above is The Crown/Mucky Duck, now revealing its attractive tiled pub signage. It’s doomed to be a Sainsbury’s (see application below). 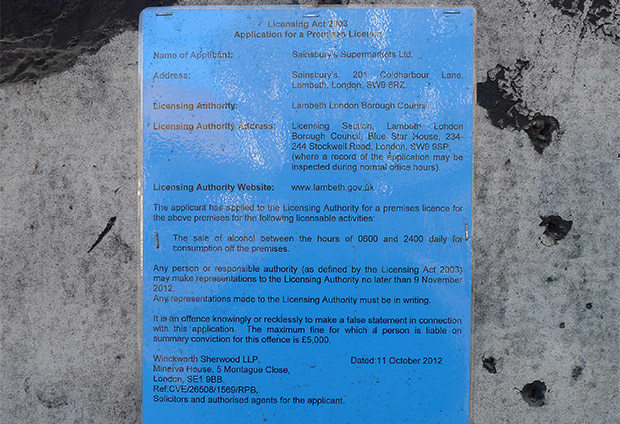 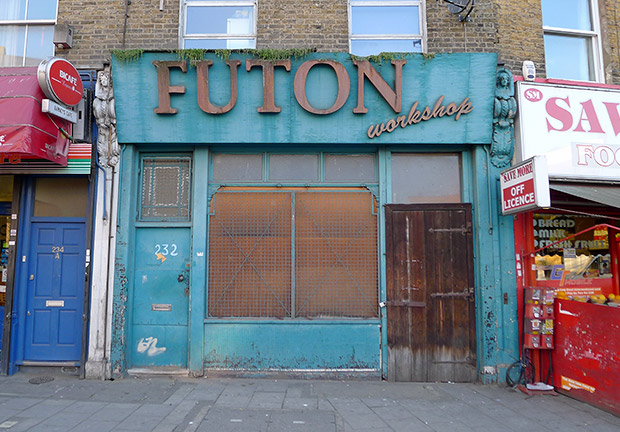 Closed for at least a decade, the Futon Workshop in Loughborough Junction was once a busy shop. I think I bought a futon from these guys once. 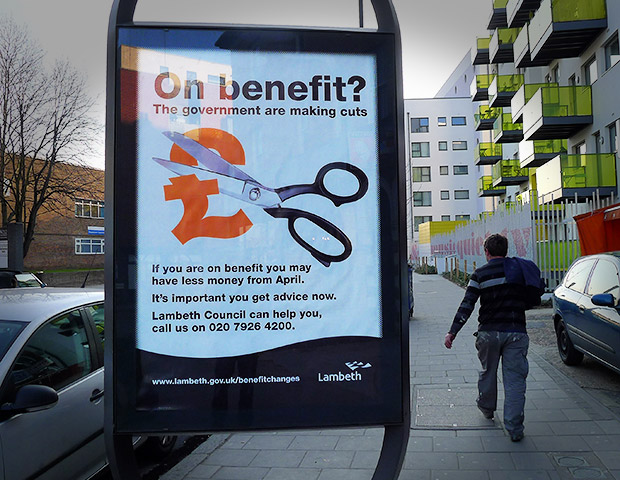 As if to to rub it in the faces of locals struggling with the relentless recession, the scumbag government is introducing benefit cuts.

Note the distinctive green glass of the Skanska housing development in the background. 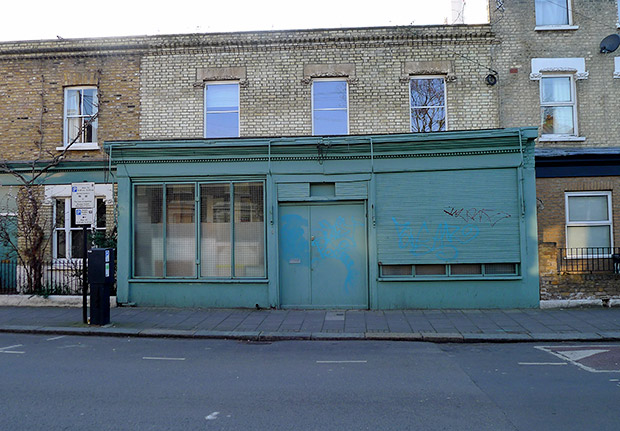 Renewal and the the Loughborough Junction Action Group (LJAG)

The good news is that determined locals are getting involved and have formed an action group to get Loughborough Junction back, err, in motion. They’re very much worth supporting.

Made up of an independent group of people who live or work in the area, the LJAG is tasked with “regenerating and improving the area and the lives of the people who live there”. 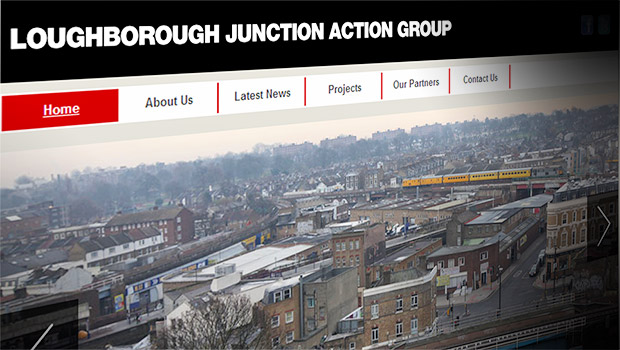 Here’s how they describe their activities on their website:

We are embedded in our diverse and vibrant neighbourhood and hold festivals, street parties and monthly gatherings, literary and film events and organise arts activities in local schools.

Our members work with many local organisations, such as tenants’ and residents’ associations, community initiatives such as Building Communities in Coldharbour and the Big Local, which are working on projects designed to empower local people, improve community cohesion and enhance neighbourhood facilities.

They’re busy this weekend too, and on Saturday 23rd March volunteers will be tidying up the space at Bill Board Corner on the corner of Coldharbour Lane and Loughborough Road,  from 11am to 2pm.

We also have some lovely plants to plant in the tree pits in Station Avenue. Please come and help us and make Station Avenue a place of beauty.