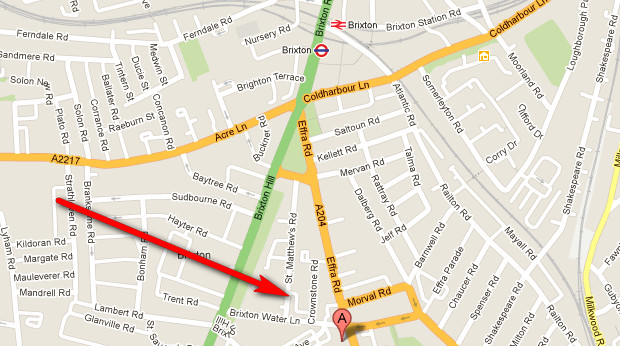 The new mega store will replace the existing Carpetright and Topps Tiles stores, which were, in turn, built on the site of the old Brixton Roller Rink.

The plans for yet another supermarket in the area has caused concern amongst some locals, so the public meeting was held with representatives from Sainsbury’s and the Lambeth council licensing department joining Tulse Hill councillor Marcia Cameron and Chuka Umunna on the panel.

Urban75 poster Paolo attended the meeting and posted this report on the urban75 thread about the proposed development:

I went to (most of) tonight’s community session, run by Chuka with reps from Lambeth Council and Sainsbury’s on the panel.

There was a good turn out from the local community, and although the majority were opposed or concerned, there were also some people who were pro.

One overriding theme was impact on local independents. Sainsbury’s reps claimed other stores of theirs had been a positive catalyst, one council rep said the evidence was the opposite.

Not everyone was anti/concerned, and people who were pro were invited (by Chuka) to have their say, and were by and large treated respectfully by everyone else.

Anyone else here attend? Perhaps you can fill out some of the inevitable gaps in my list above.

Although these types of forums end up being very long, I’d strongly recommend going if you are serious about your views. You can get a much better understanding about how people feel, and also get your own views across to elected reps who – I guess – won’t read much / anything from here in the bear pit. 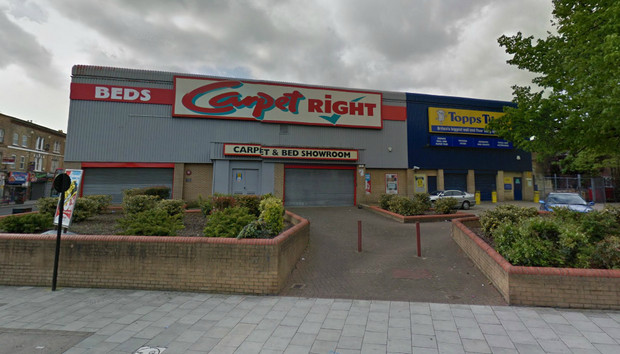 Another poster on the thread, Brixton Hatter, also made an interesting post about the supposed ‘trickle down’ effect that it’as claimed some supermarket developments can bring to a neighbourhood.

It’s well worth a read:

This is far from comprehensive, but here’s some of the stats and research I dug out about supermarkets and how they affect local areas when they move in.

– locally owned/independent businesses tend to more embedded in the community, therefore the money they receive and pay out to suppliers/staff etc is more likely to circulate in the local economy. On average, for every £1 spent in a supermarket, 90 pence leaves the local area (nef/Countryside Agency 2002)

– spending money with local suppliers means money gets recycled around the local community. Northumberland Council did a study (not just related to retail, but also other local businesses) which showed £1 spent with a local supplier created £1.76 worth of value to the local economy, whereas £1 spent with outside suppliers only created 36 pence of value. (nef 2005)

– supermarkets can lead to a loss in skills in a local area. A variety of skills/jobs such as butchery, bakery, dairy people, vegetable dealers/suppliers, fruiterers, people running their own businesses etc get lost, and replaced with lower-skilled jobs like shelf stackers, warehouse operatives and checkout clerks. (Haralambos & Holborn: Sociology 1995)

– there is also a stat which shows that – despite supermarkets claiming to ‘create’ jobs – new supermarkets on average lead to an overall loss of employment in local retail when measured some time after opening (I think two years iirc). Fewer people are actually employed overall – can’t remember the actual % reduction though. (Can’t find the exact reference for that one, sorry…will keep looking)

– local convenience stores create more jobs in terms of sales than supermarkets. Figures for 2004 show these shops, which employ over half a million people, took only £42,000 worth of turnover to create a job. Supermarkets take £95,000 of sales to create a job. E.g. Tesco (£29 billion turnover) employed 250,000 people while small grocery shops (£21 billion turnover) employed double the number of people. (The Grocer 15/05/2004)

There was a good quote from Benjamin Zephaniah (poet) when he was interviewed about Queens Market in Newham and the threat from supermarkets. He talked about how supermarkets could never create the community interactions which the market and local shops did. He said:

“I have spoken to people who recall when the customers were all German immigrants and someone else who remembers when they were all Jewish. I go there sometimes and you see the white, middle-aged guys who sell to the Asian ladies and have learned a bit of Urdu.”

You can read more local viewpoints and comment about the  Sainsbury’s proposal on the urban75 thread – and feel free to get involved and have your say!

Message from Merthyr – how the ConDem cuts will kill the community