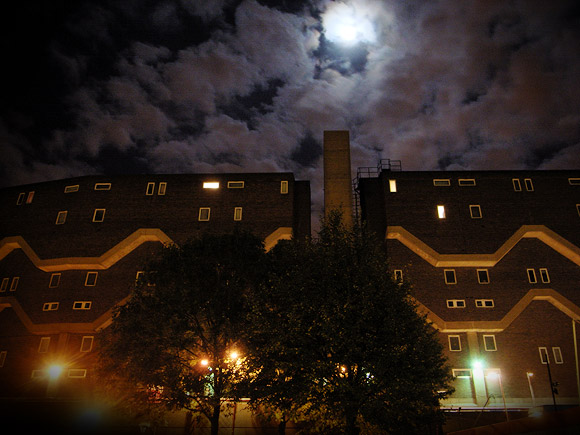 Designed to deflect the noise and fumes of a (thankfully) abandoned  motorway project, the Barrier Block (Southwyck House) on Coldharbour Lane, Brixton sharply divides opinions of those who gaze upon its neo-Brutalist lines. 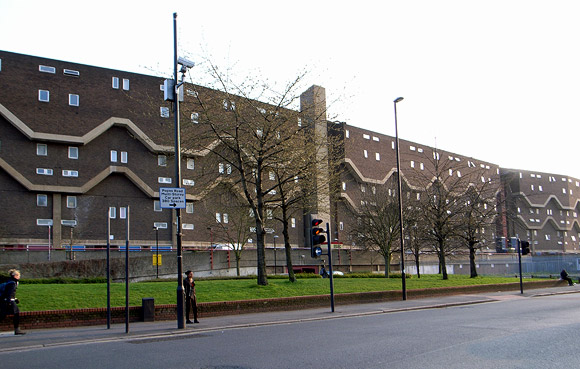 Construction was already underway when the insane motorway scheme was cancelled, which explains the small windows in the front – the architect quite rightly figured that residents wouldn’t  be too keen to stare out over six lanes of rumbling traffic. 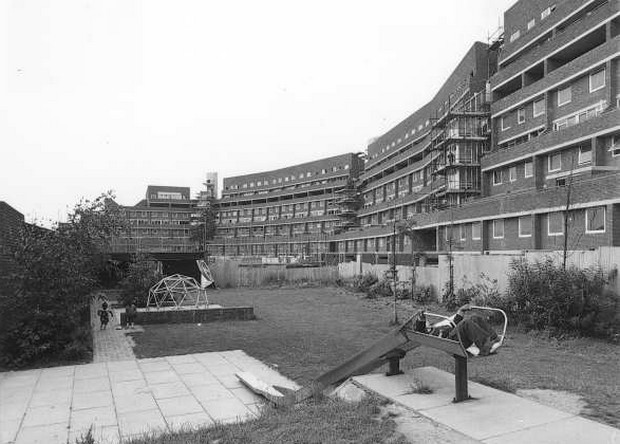 The stark lines of the building have led some people to mistake it for Brixton prison, while a particularly daft – but-insistent local rumour insists that it was built “the wrong way around,” which supposedly prompted the architect to later commit suicide. It’s all nonsense, of course. 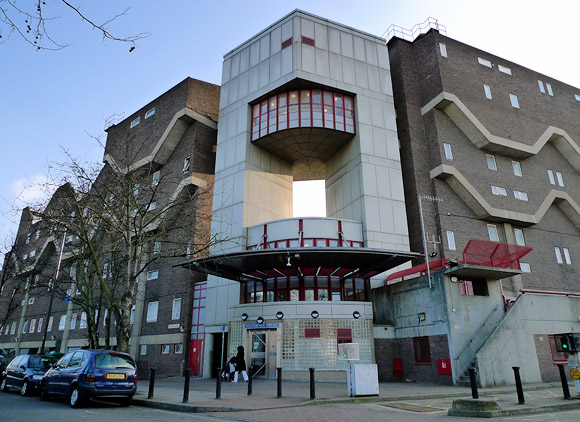 The block’s critics have been vociferous:  Building.com described it as “a blunder of a building,” presenting a “daunting edifice, with early seventies, neobrutalist-inspired architecture and tiny turret windows peering out over Brixton,” concluding that it was an, “ugly and impractical building.” 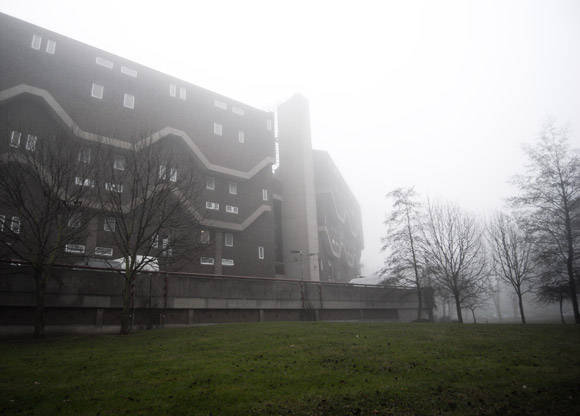 The Evening Standard declared it “notorious,” while broadcaster Darcus Howe was particularly scathing in a New Statesman piece from 2003:

Not only would I like to see it destroyed, I would like to see it blown up so that the whole of London could see the mushroom of smoke and the flames, so they’d know that its like would never be seen again. From the outside it looks like a prison–I am sure this was in the architect’s head when he designed it. I have friends who live there, and I refuse to go round to see them. 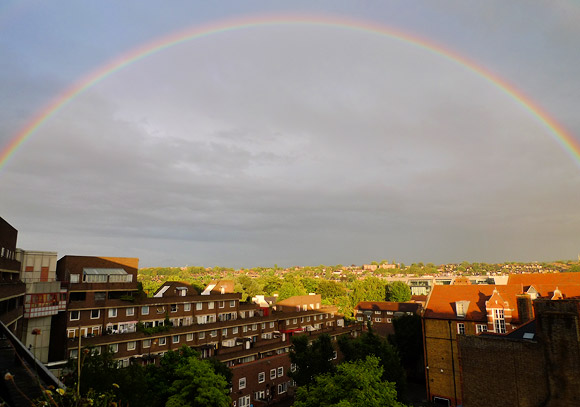 [View from the rear of Southwyck House]

Though the critics may be quick to dismiss the building, very few bother to ask the residents what they think of the building. As for me, I love the place.

The standard of construction of the block is very high and the flats are solid and well designed (many are split across two or more floors).

Inside there’s open walkways, and the architect made the most of the south facing rear of the block by fitting the flats with large windows and balconies, letting residents to enjoy the sunshine and take in the pleasant view. We grew vegetables on our balcony every year.

There’s a surprisingly green view from the back too, with the vista unhindered by the low rise Moorlands Estate, and taking in the green stretches of south London including both Brockwell Park and Crystal Palace Park. 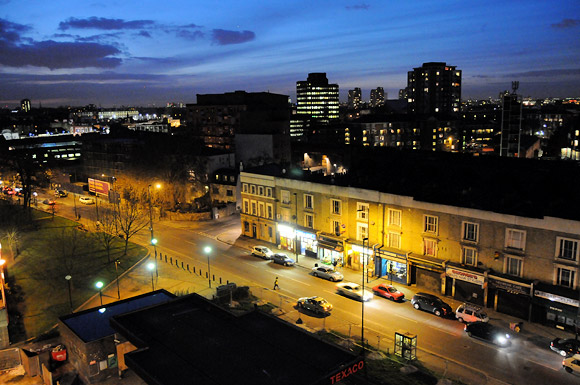 Although the windows are frustratingly small, the front elevation affords great views across London – from the top floor flats of Southwyck House you can see right across London, squint to read the time on Big Ben, look east to the towers of Docklands or see the top of stunning Shard building in the City of London. 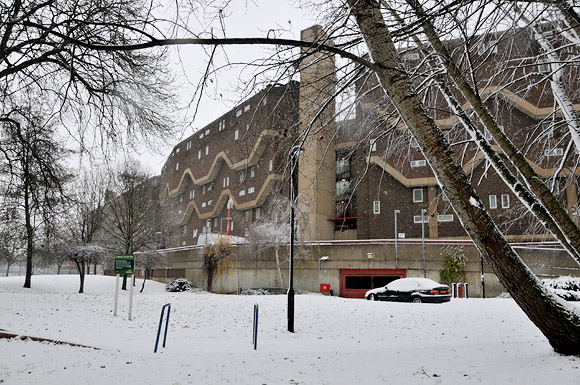 And if that doesn’t hold your interest, there’s always the madness of Coldharbour Lane (ludicrously once billed as ‘London’s most dangerous street‘ in the Standard) to look over. 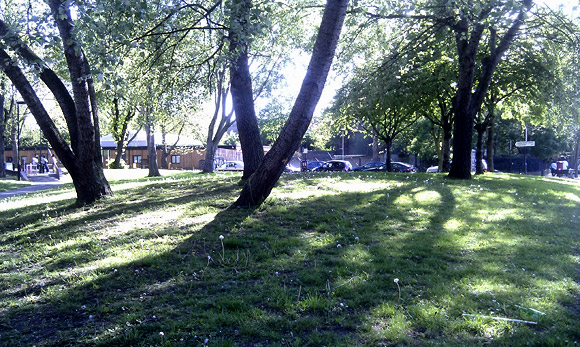 Running along Coldharbour Lane for much of the length of the Barrier Block is a lovely stretch of well maintained grass, offering plenty of trees and shrubs for wildlife. The dawn chorus is particularly loud in the early hours!

The green space is well used by locals for summer picnics, lunchtime workers and for locals exercising their dogs, although there seems to be no shortage of developers desperate to take it away from residents.

Such is the iconic status of the building that it appears on the back of every Brixton Pound note – love it or hate it, Southwyck House has become one of the most well known landmarks in Brixton. 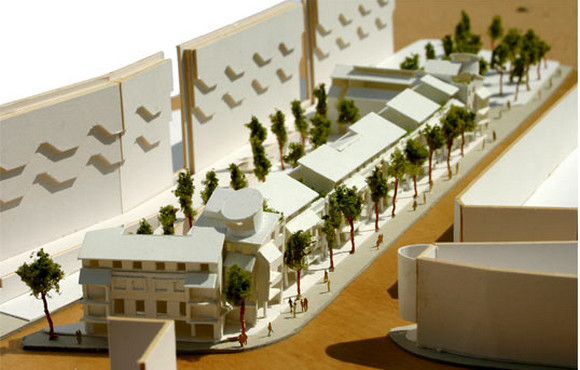 Back in 2002, the hideous scheme pictured above wanted to shunt some weird looking buildings on top of the park, while it appears that relative newcomers Brixton Green currently have plans to build unwanted commercial developements onto the western end of the green space.

Unsurprisingly, residents have never been consulted on either scheme. 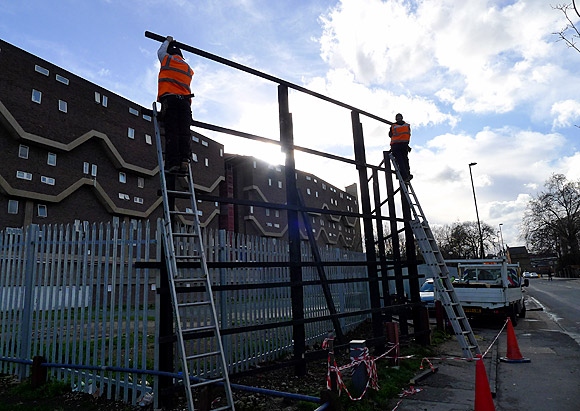 Unfortunately the world’s ugliest Car Valeting service has recently set up shop in the middle of this green stretch, surrounding the old Texaco garage with Guantanamo Bay levels of high security fencing, butted up against an illegal billboard.

Quite why they need such prison-standard fencing is beyond me, but this bleak, unlandscaped sea of concrete and steel doesn’t do much to enhance Coldharbour Lane’s reputation. 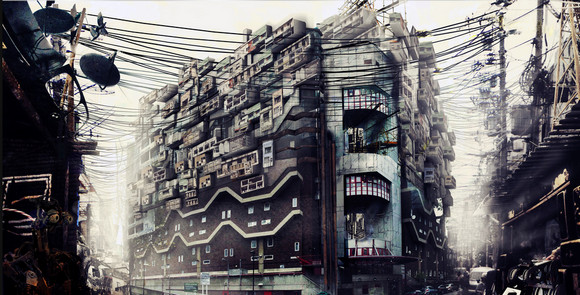 32 Comments on “The singular beauty of Southwyck House, aka the Brixton Barrier Block”