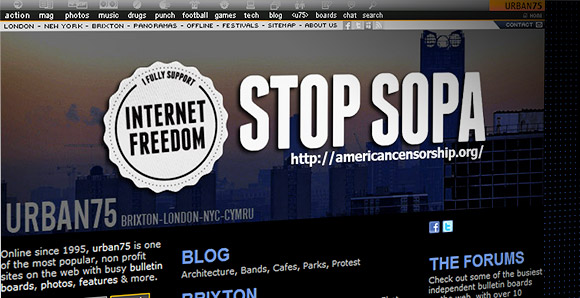 What’s being billed as ‘the largest internet protest in history’ is underway today, with websites showing their opposition against the proposed Stop Online Piracy Act (SOPA) and its sibling the Protect IP Act (PIPA) in the US.

In support and solidarity with this important protest, I’ve changed the headers across all the urban75 homepages for the day (see above). Reddit and Wikipedia are among some of the big sites who have ‘gone dark’ today (i.e shut down for the day) to illustrate what might happen if SOPA became law.

Here’s what I wrote about the proposed legislation on my sister site, Wirefresh.com

The two bills – the Stop Online Piracy Act and the PROTECT IP Act – are intended to blacklist ‘renegade’ sites like Pirate Bay that share copyrighted films and music, and make the uploading clips of movies or TV shows to Facebook or YouTube a criminal act.

Users streaming copyrighted content could face a five-year jail term, with sites offering pirated content being punished by being delisted on search engines – and potentially have their IP address blacklisted.

It won’t just be US users affected either: Stop Online Piracy Act (Sopa): how it could affect UK-based websites like Urban 75.

SopaStrike.com offers advice how websites and users can get involved:

Websites: How to Strike

Everyone: Prepare to Strike