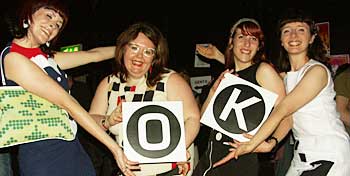 Despite my bloodied hooter, I ventured up to the Rocket in Holloway Road for Modstock.

Billed as a “3 Day Event Celebrating 40 Years of Modernist Culture”, it was a curious mix of stylish young mods, middle aged sharp dressers and some less well-weathered old ‘uns squeezing into mohair suits.

I was there to take snaps of the Actionettes, who performed a short set inbetween a moody fashion show and an old-school 60s band. It was fun.

In case you didn’t know, I’ve always had a soft spot for Mod. I grew up with punk, Motown and the Who. For me, Quadrophenia remains the definitive album about teenage energy, awkwardness and rebellion.

I was even in a moderately well known mod revival band, Beggar, and we recorded several tracks on the chart-denting (just!) Mods Mayday 79.

Beggar on Mods Mayday 79 – another blast from my past [video]

My mod past – Mods Mayday and all that

Punk vs Country Brixton showdown – knees-up and a pile on!

A right old hillbilly hoedown at the Brixton Offline Club

Presentations and all girl punk